Alexander Rossi says the Andretti Autosport-Honda team is “is in a really strong place right now” after a difficult 2020, and admits he has also focused on improving his driving.

A late run of podium finishes in 2020 salvaged ninth in the championship despite crashing out of the lead in the St. Petersburg finale, but Rossi, who finished runner-up in the 2018 points race and third in 2019 was left disappointed by his first winless season in IndyCar.

Talking about the first two thirds of last season, Rossi said: “There wasn't anything we were doing right, whether it was qualifying performance, whether it was race performance, pit stops, my driving – none of it was good. I think Indianapolis was quite an eye opener for everyone in terms of how fast all the Andretti Autosport cars, and to come away with really nothing was not good. It wasn't a good Monday.

“We were honest with each other, and we all discussed things that were good and things that were not good, and we took 2020 as an opportunity to learn from our mistakes. I think there's an advantage and so many positives we can take out of it. I think the end of the year went really well for us for the most part, minus St. Pete, which is on me…

“I think we're operating at a really high level right now, and I'm excited to get on track in Barber… Testing has been good. I think that the last kind of 20 percent of last year, things had turned a corner and we had identified a lot of issues and had a lot of tough conversations and made some changes, so I think we went into the off-season with quite a bit of optimism, and we've continued that progression all the way through the winter.”

Rossi, who won January’s Rolex 24 Hours at Daytona sharing the Wayne Taylor Racing Acura with Filipe Albuquerque, Ricky Taylor and Helio Castroneves, said: “Last year just sucked. It sucked on track, it sucked off track. It was a terrible year for everyone except for Scott [Dixon, champion] and Takuma [Sato, Indy 500 winner], so good for them.”

Asked to expand on why this was so, aside from the temporary deletion of all but one temporary track due to the COVID pandemic – “street courses are Andretti Autosport's strength… that and the Speedway” – Rossi explained that the cars weren’t rolling off the truck fast, and the compressed weekend schedules meant the team often ran out of time to catch up. He also observed that running five cars had been no benefit in those circumstances, because there also wasn’t time for the drivers and race engineers to pool their information to define what did and didn’t work.

“I think the biggest thing that hurt us at the beginning of last year was really the reduced track time going into the actual qualifying and races,” he said. “If you look back at 2018-2019, we were never great on Fridays, and we would do a lot of work Friday night and come back Saturday for final practice and be there and qualify up front and the rest was kind of history.

“When you have that many cars and it's such a condensed one-hour practice with a two-hour break, into qualifying, you can't use the advantage of all those cars. It's not possible. You don't have enough people and enough time to go through that amount of information and make educated decisions…

“The other thing is that when COVID happened, all the wind tunnel, the shaker rig, the simulator time – it all disappeared. We didn't have any tools available to us to kind of figure out what our problems were, address them and solve them. We had to do it all on track.

“[So] the one big thing that we wanted to accomplish in preseason testing this year was making sure that our offline simulation was correlating to the on-track stuff, and we did a lot of really cool things this winter. Honda and HPD have played a pretty big role in that, and we've progressed quite a lot. I think the team is operating at a level that they haven't before… We just have to go out and do it now.”

Rossi spoke with candor when asked to pinpoint where he felt he needed to improve his own driving.

“As much as we as a team struggled with the minimal practice time, I did, as well,” he said. “I wasn't doing a good enough job getting up to speed quick enough, which was putting us on the back foot and having to take pretty big risks in qualifying. Sometimes it was OK. Quite honestly, we qualified alright throughout the beginning of the year. We were just never kind of in the top three, which is where you've got to be these days to go out and win races.”

Asked if this had anything to do with his overtly vigorous inputs in the cockpit, as noted previously by Colton Herta – who says his own style is more like Ryan Hunter-Reay’s – Rossi denied it, noting that in terms of car setup, his own preferences are more similar to his senior teammate’s.

“If there's any disadvantage [my style] can be a bit harder on rear tires,” he said, “although it's funny [Herta] says that because I'm usually better than him on certain tire combinations, but whatever. Him and I, we do drive completely different for sure. I'm more aggressive with the car.

“But you've just got to tune for it. Him and I don't drive the same setup. Ryan and I are probably closer. That's part of the challenge, right? It's part of why the relationship with the engineers is so important and you've got to have that trust and that communication flow that allows you to get what you need out of the car to suit your individual driving style.” 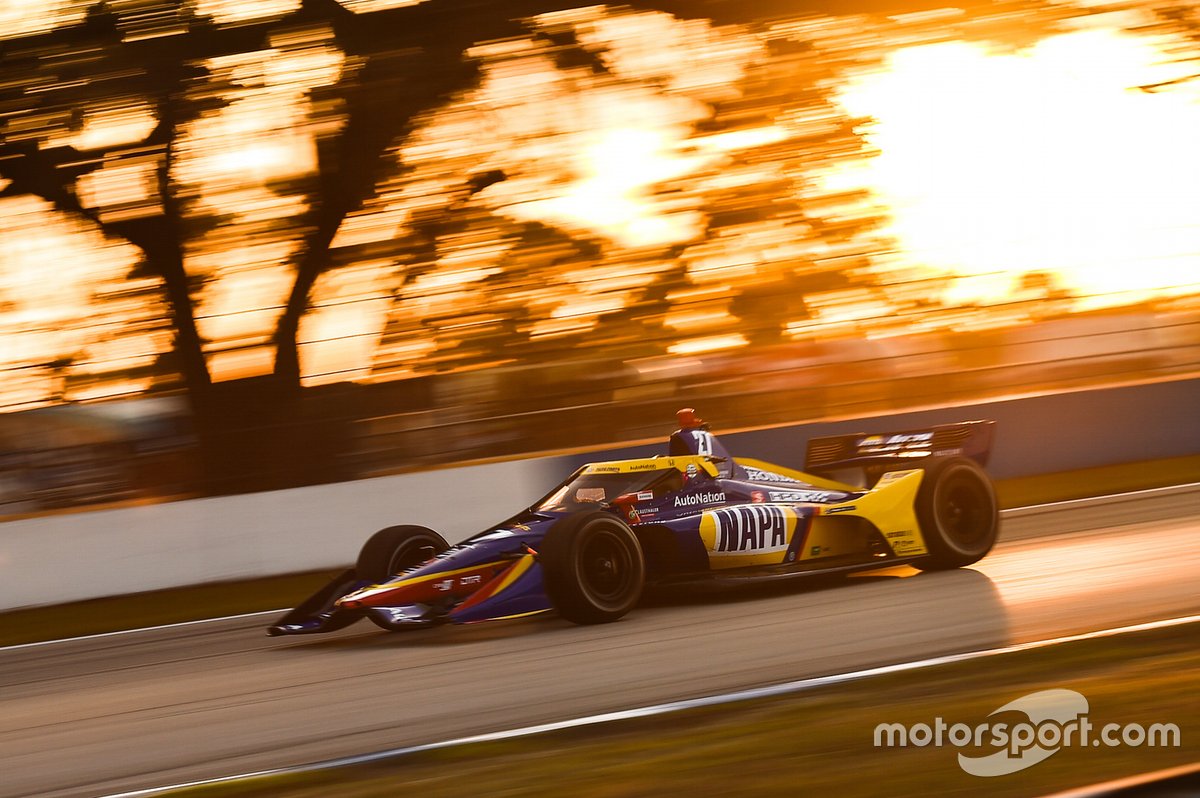 DeFrancesco starts campaign for neonatal ICU that saved his life