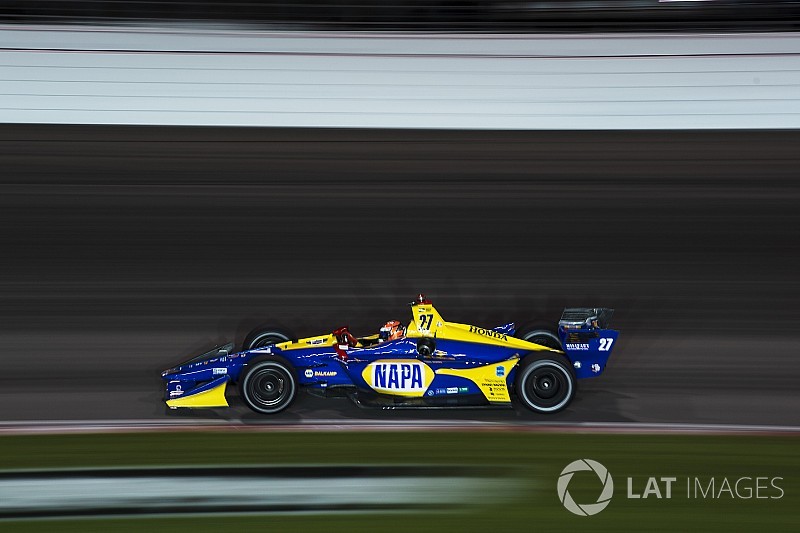 2018 IndyCar championship contender Alexander Rossi says his “astronomical” fuel-saving at Gateway was frustrating, but is the sort of aggressive tactic he will need to catch and beat Scott Dixon.

The Andretti Autosport ace was the only driver to complete the race distance on only three fuel stops, after his Andretti teammate Ryan Hunter-Reay’s fuel pressure problem caused a late caution before the ideal time for a third pitstop, which meant drivers either had to make a fourth stop or back off significantly to save fuel.

Rossi’s enforced lower pace dropped him out of the top three to eighth, before rising up the order once more as his rivals made their final splash-n-dash stops. Only winner Will Power caught and passed him again, and Rossi’s runner-up finish ahead of third-placed Scott Dixon meant that he chipped three points out of the Ganassi driver’s championship lead, reducing it to 26 points with two races to go.

“You never believe that you're going to need to fuel save as much as we did,” said Rossi, who said he didn’t go full throttle for the last 70 laps of the race. “You can definitely practice it and find ways to achieve better mileage, but what we were looking for at the end was pretty astronomical.

“I don't think you ever really think that that's going to be the scenario until you're forced into it, and then you've just got to think on your feet and experiment and try and make it happen. It was difficult to achieve what we were trying to achieve, but the #27 [car] guys have definitely done this before.”

“It wasn't our first rodeo,” continued Rossi, who won the 2016 Indy 500 and last month’s Mid-Ohio IndyCar race using similar tactics, “and I definitely had confidence in the people on the pit stand who are giving me those numbers and making the calculations to make sure we can get to the end.

“It's frustrating, but you've just got to be patient with it. At the end of the day, you're relieved that it works out because always there's that thought in your mind that it would suck if it didn't.

“We're going to have to be pretty aggressive, so I wasn't going to be upset. I'd rather finish second going down swinging and trying to win the championship than finish second and just trying to accept that.”

Rossi came close to crashing out of the race at Gateway, after running high in Turn 1 as Power aggressively sliced down the inside of him on Lap 146 of 248. The Andretti car snapped sideways before Rossi caught it again, inches from the wall.

“I said a lot of bad words,” Rossi said when he asked about the moment. “It was one of those ones where I’d pretty much given up and it came back by the grace of God. I was on the brakes and ready to hit the wall. So, it just kind of corrected itself.”