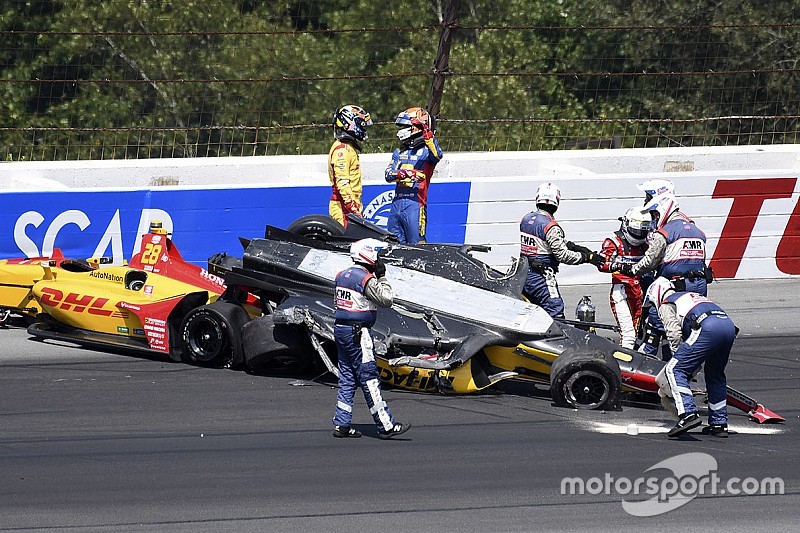 Alexander Rossi has called out fellow Indy 500 winner Takuma Sato after the pair made contact on the opening lap of today’s ABC Supply 500, triggering a five-car wreck that eliminated the title challenger.

Rossi, after a poor start from the front row, was drafted down to Turn 2 by Andretti Autosport-Honda teammate Ryan Hunter-Reay on the inside and the Rahal Letterman Lanigan Racing-Honda of Takuma Sato on the outside, when Sato appeared to squeeze down on Rossi.

The resultant collision not only eliminated this trio, but also caught up James Hinchcliffe’s Arrow SPM-Honda and the Chip Ganassi Racing-Honda of Felix Rosenqvist, which was spat up into the fence and rode along the retaining wall, thankfully the correct way up. It was a shocking reminder of the perils of the ‘Tricky Triangle’, just one-year after Robert Wickens’ career-halting shunt.

Outside the medical center, Rossi told NBCSN, “I’ve seen a replay and I saw it in person. Obviously I didn’t get a good start, and that’s on me, but we were three-wide with Ryan on the inside, I was in the middle with Takuma on the outside.

“I can’t even begin to understand after last year how Takuma thinks any sort of driving like that is acceptable. To turn across two cars at that speed at that corner, in a 500-mile race is disgraceful and upsetting. It might have cost me this championship.

“We have a few days to rebound and go for race wins, that’s all that matters [for us] now.”

Hunter-Reay added: “My view is that it was ridiculous. I thank God everyone is alright, I thought we learned our lesson from last year. Lap 1 of a 500mile race…

“From my perspective, I had a nice, clean run on Rossi, I was almost three quarters of the way alongside, and all of sudden, our of nowhere, I’m backwards and I’m seeing the rest of the field coming as I’m backing into it. Then I saw Felix go up into the fence.”

NBCSN commentator Paul Tracy, no stranger to controversy in his driving career, stated: “My thoughts and my opinion – that accident after what happened last year – Sato needs a hard look at a suspension or something. I’ve been suspended for something very minimal and I’ve had to sit out [a race], and I completely agreed with what Rossi said.”

Rosenqvist was able to walk from his wrecked car to the AMR ambulance but has been taken to hospital for further evaluation.