If you missed the Sao Paulo IndyCar 300 you just might be kicking yourself.

The 2013 event, the fourth contested on a temporary course over the city of Sao Paulo, Brazil's streets, more than lived up to the expectations IndyCar fans have, as determined by poll, of what American-centric open-wheel racing should be: a festival atmosphere highlighted by street racing with fast cars and exciting battles on the track.

This Sao Paulo IndyCar 300 delivered on those expectations with a solid Floyd Mayweather right cross to Robert Guerrero's jaw, with a "jacked-up" linebacker hit on the opposing quarterback, with a double punctuation mark in red, bolded font.

A combination of a large and vocal crowd in the grandstands, interesting (to say the least) pit and fuel and tire strategy, mixed in with a fast, fast racetrack and the best pursuit and counter-moves seen in IndyCar in many a year brought this spectacular contest to a stirring finish. James Hinchcliffe won his second event of the 2013 season, taking that honor away from Takuma Sato on the last turn of the final lap of the race. 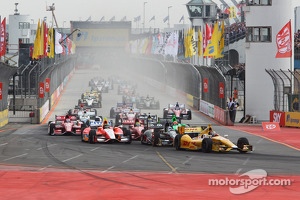 Once the inexplicable carnage that began the race was over (the field accumulated a disgusting eight yellows in the first fifty of seventy-five laps) IndyCar's young turks (Hinch, Taku, Josef Newgarden and Marco Andretti) took the competition to uber-level for the last third of the race, flying over the 2.6 mile circuit nose-to-tail at speeds of 190-plus miles per hour as each man jockeyed for position to overtake.

As dramatic as was the late-lap four-man contest conducted at high speed with separation no bigger than a bed blanket, a ton of credit goes to Takuma Sato alone for making the Sao Paulo IndyCar 300 a race to remember.

If you wondered why Sato pitted with forty laps distance to go while holding the lead, so did others. At least a few observers were thinking to themselves, "This isn't Indy where you can draft all around and stretch to save fuel. There's been a ton or wrecks and yellow, and there will be more chances to stop under caution. He should have stayed out on the track while they were in front, and not given up track position on this narrow course."

But the diminutive Japanese driver drove determinedly past the decision to pit while holding the lead on Lap 35 and a dropped lug-nut by the tire man during the stop to return to the front.

When the number 14 car pitted again 22 laps from the end, did not change even just rear tires (no doubt in deference to the snafu on the left rear during the aforementioned stop) and team boss Larry Foyt was yelling into his headset at Sato as the driver left the pits, one could assume there was some behind the scenes strategy discussion going on between the two.

Again, Sato drove steadfastly past the decision to not refresh the red side-walled rubber on the final stop at Lap 53, a truly optimistic expectation of endurance from the current Firestone technology, and he kept the car in front as the tires wore out with some very creative racing lines that made the ABC Supply car very, very wide. 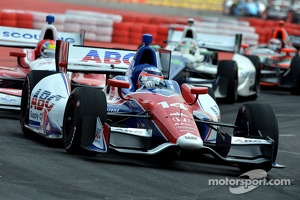 Unfortunately for the Foyt team, it was those spent tires that yielded on the last turn of the last lap as Sato swung wide and away with breaking into the hairpin, and that set up Hinch's drive-by on the inside line with a powerful acceleration out of the corner to win the race, making manifest the proverbial "straw that broke the camel's back" their man could not overcome.

Hinchcliffe acknowledged Sato's heroic but fateful tour afterwards, saying, "When you win (or lose) on the last lap like that, it's usually not very pretty."

Does anyone recall that the Sao Paulo IndyCar 300 was supposed to be about the Brazilians?

This event boasted two hometown heroes, Tony Kanaan and Ana Beatriz, with a third countryman in the field (Helio Castroneves). The trio made noise, but it was for all the wrong reasons.

Kanaan was sending pre-race signals that it was going to be a long day well before the first wheel turned in anger.

"I only have half an hour from warm-up to race (five hours) for being by myself," said Kanaan amidst a mass of car-crazy Paulistanos high-fiving around him. "It's a pleasure to visit the suites, shake hands and so on...but it takes a lot out of me."

The ligament damage in Kanaan's injured right thumb was bandaged and injected with pain-killers to allow him to compete and within ten laps of the start TK took the bright red Itaipava car to second place, and then into the lead as Lap 11 began.

However, TK lost time on an ensuing pit stop when the fuel nozzle failed to engage the port immediately, and fell to third coming back onto the track. He gave up more ground on the Lap 27 restart, succumbing to a Sato advance and assuming the sixth position.

With 30 laps left TK moved around Hunter-Reay for the lead for a second time as the American's right rear tire deflated. The end came suddenly (on Lap 50) when the car slowed, appearing to be out of gas, and TK coasted to a stop parallel on the race course to public traffic moving slowly on the adjacent streets of Sao Paulo. 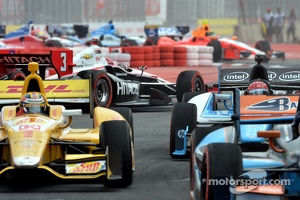 Castroneves was optimistic before the green flag fell, even though his qualification faux pas (he failed to record a time during the second knock-out session) left him and three-time previous Sao Paulo IndyCar 300 winner Will Power near the back of the grid. "There is a lot of hope, even starting from the back, because we may do like we did last year and come up through the pack to finish in the top five," he said.

Those plans were wrenched awry when Helio suffered a broken front wing after teammate Power read-ended him in the chicane on Lap 11. Castroneves then went too deep into the esses on Lap 24, missing the turns completely and igniting a chain reaction of crashing cars behind him. The missteps continued on the subsequent restart at Lap 27 when he himself was rear-ended into a spin that moved him to the rear of the field.

The final insult came on a Lap 39 restart that put four cars into a knot and left Simon Pagenaud, Sebastian Bourdais and J R Hildebrand parked on the track with Helio. The damage was done by that point, and with the right rear tire rubber flailing the air and the body work disintegrating Castroneves fell back for the final time with a broken car--only to enter prematurely a closed pit area and incur a drive-thru penalty under yellow.

Ana Beatriz, the other hometown driver with Kanaan, was racy throughout the weekend, running a minimal drag set-up that gave her a huge advantage on the long straightaways here; but she lost the transmission in her yellow and blue Iparanga Dallara DW12 early on and was not a factor, finishing dead last.