Takuma Sato: "Texas Motor Speedway is a great 1.5 mile oval. It always presents exciting racing because we run so close and go two-wide which is helped by the steep banking."

Takuma Sato and the ABC Supply team are in their first season together. Sato is making his fourth appearance (and fifth start) at Texas Motor Speedway. He posted his first career victory in the Long Beach Grand Prix April 21. 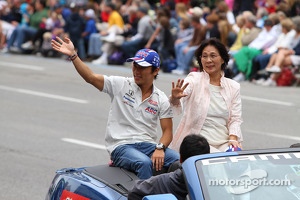 Following his 19th and 23rd place finishes in the doubleheader at Detroit’s Belle Isle, he is sixth in the IZOD IndyCar Series standings. He posted his first career victory in the Long Beach Grand Prix April 21.

Past Performance at TMS: Sato’s best start is fourth and his best finish is fifth, both coming in the first of two races at the track in 2011. The Foyt team’s best finish at Texas came in 1998 when they won with Billy Boat.

The year before Boat had taken the checkered flag first but USAC Scorers ruled that he finished second and gave the win to Arie Luyendyk the next day (but Foyt still has the trophy). Boat also won the pole at TMS in the fall of 1998.

Takuma Sato testing at Texas Motor Speedway: “It was productive. The team wanted to try some different setups from last year and we made good progress. However, the track condition was so cold back then that we stopped running before sunset so perhaps we need to revisit some of the items but still it was a good test.”

“Texas Motor Speedway is a great 1.5 mile oval. It always presents exciting racing because we run so close and go two-wide which is helped by the steep banking. But recently, it became even more challenging due to technical regulation changes. We have a lot less down-force than we used to have.

The idea was to split up the field to minimize pack racing; as a result, there is no more 3-wide racing and very little 2-wide racing. It has become more single-file racing and quite difficult to overtake. Also, the low down-force increases the tire degradation and there is no more flat on the gas so it is very challenging for us to manage all of it well.”