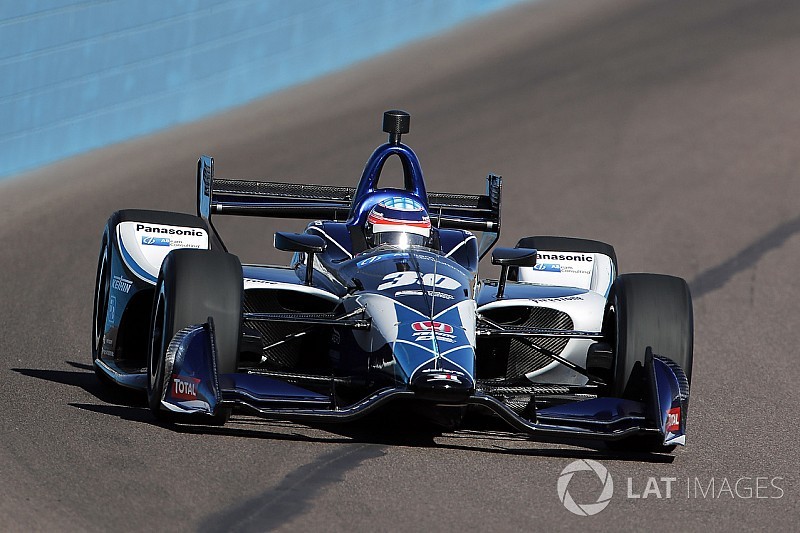 Rahal Letterman Lanigan Racing-Honda’s impressive form at ISM Raceway in Phoenix has continued into the second day, with Takuma Sato topping the speed charts with a 189mph lap.

Last year’s Indy 500 winner clocked a 19.3920sec lap, an average speed of 189.728mph on the 17th of his 63 timed laps, to put himself at the top of the speed charts for the remainder of the three-hour afternoon session. This comes on the heels of RLLR finishing last night’s practice with a 1-2, Graham Rahal ahead of Sato.

Team Penske’s Will Power was the quickest of the Chevrolet runners and the only other driver to breach the 189mph barrier with a lap 0.45mph behind, which equates to 0.0463sec.

Third went to Scott Dixon in the Chip Ganassi Racing-Honda, ahead of Ryan Hunter-Reay’s Andretti Autosport-Honda, last year’s Phoenix winner Simon Pagenaud in the second of the Penskes, and Sebastien Bourdais in the Dale Coyne Racing with Vasser-Sullivan entry.

Ed Jones, who turned 81 laps, was seventh in the second Ganassi entry ahead of reigning IndyCar champion, Josef Newgarden (Penske).

Rookies Robert Wickens and Pietro Fittipaldi were a respectable 14th and 15th for Schmidt Peterson Motorsports and Coyne, respectively.

James Hinchcliffe turned the most laps (91) but wound up only 21st, while Gabby Chaves in the new Harding team was bottom of the list.

Juncos Racing did not run Kyle Kaiser, having completed a vast number of laps in Thursday’s rookie test and both sessions yesterday.

IndyCar aeroscreen's first test – the verdict from the expert