Sato, Malukas put their pace down to great teamwork at Coyne

Malukas, in the Coyne with HMD car, topped his Q1 qualifying group and was second fastest in Q2 before ultimately taking sixth on the grid. Sato, meanwhile, in the Coyne with RWR car, was half a second off in Q1, pared that margin to one-tenth in Q2, and then on used reds in the Firestone Fast Six delivered a lap that landed him second on the grid, just 0.134sec from beating Josef Newgarden to pole.

“We both feel really proud of the team, Dale Coyne Racing, the #51 car, did a fantastic job,” grinned Sato afterward. “And obviously David, he did phenomenal job in Q1, Q2. He pushed me so hard, worked extremely well in the new tire condition. Finally I hook up quite a good lap in Q3. That was quite satisfying.

“We always knew that we had speed, but just wasn't able to put everything together. This weekend we feel like quite positive, so we are really happy. It is absolutely a team effort.”

The result was not entirely unexpected, as Coyne often performs well around the bumpy 2.35-mile Belle Isle track. Last year Romain Grosjean and Ed Jones qualified their DCR-Hondas third and fourth for Race 1.

Malukas, last year’s Indy Lights championship runner-up, said “I feel like this whole start of the season we've always been really close to finding the car before qualifying, but always would miss it at the last second. Now we’ve finally put it all together. I remember just doing the first two laps and saying, ‘Wow, the car is spot on.’ I came in. [The team said] ‘Do we want to make any changes?’ I said, ‘Do not touch it. This is good.’

“I'm so happy. Me and Takuma is friendly competition. I kept hearing Takuma made it [to the Fast Six] Takuma made it. That made me push even harder. Good for the team. Me and Takuma, we were pushing each other. I was like this close to the wall, so it was very good.

Sato praised his teammate, stating: “Obviously from David's side, he has to learn every single weekend, everything is so new for him. Yeah for me, too, try to learning the process at DCR, the new engineer, the boys… I think it's just building up physically, mentally, build up the momentum. Like David said, we always knew the potential. This weekend, it's all come together.

Malukas added: “I've gotten used to the way the team works and how Takuma is, how we can intermesh our data together, at the end come out the other side, going in the right direction and picking up the best pieces.

“I think, especially after how well the month of May went, from start to finish at least for me I thought it went… Overachieved for me: everything I wanted, but like way better, times 10! For me, my confidence is increased. I just feel a lot more comfortable with the car and also with the team.”

Sato said that key to their improvements was teamwork, “Not just him and I, it's just entire team. We methodically thought through what car we need to bring. This car was pretty competitive in qualification…

“David and I have kind of a similar driving style in a way, so we can share a lot of stuff. When he found something good, I try it. I find something good, he try it. Just entire team, you know: limited resource, but we make the most of it.”

“I think the fact that we're both up here shows that the team has done a really good job, it's not got lucky or something like that,” observed Malukas. “The team has actually put the work in and we've come out with a very good car. On top of it, me and Takuma – he's given me many tips going into the racing, qualifyings and practices. It's been so helpful.” 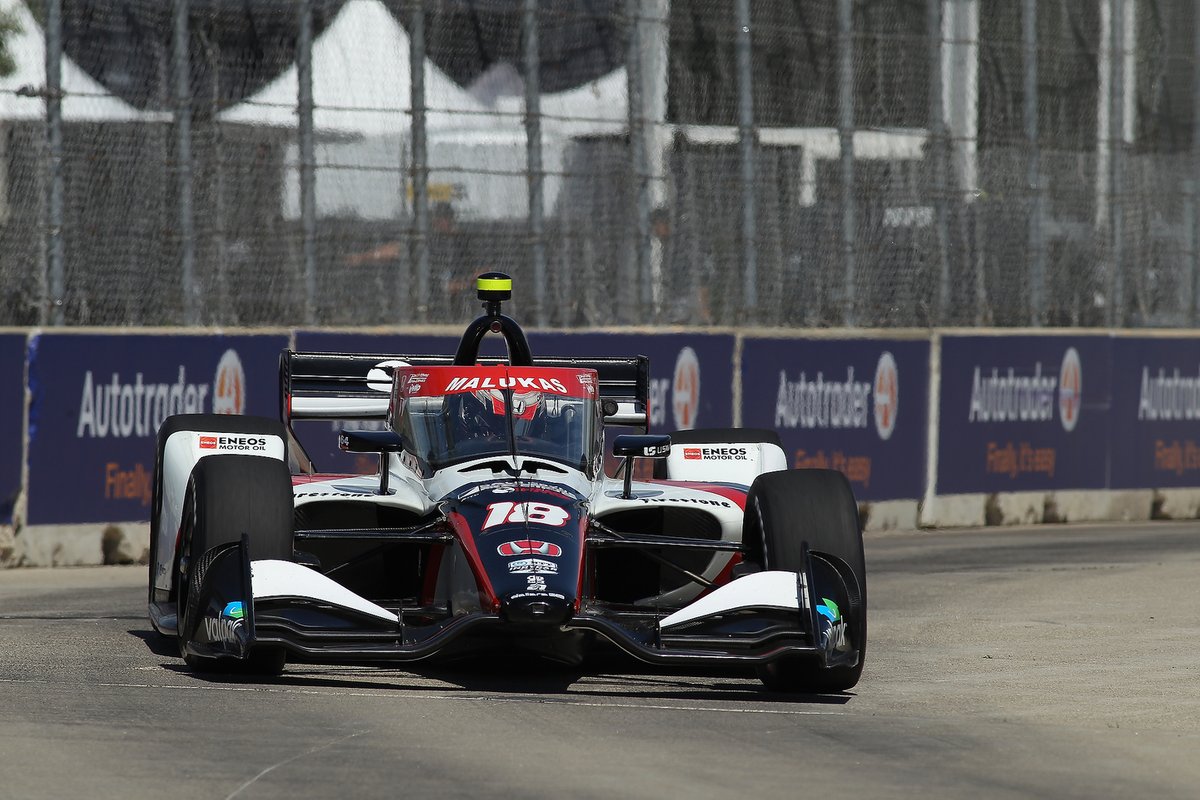 Newgarden on Detroit: “One of my most satisfying pole laps ever”

Coyne to keep Malukas, Sato for 2023, weighs up third entry

Lundgaard, Malukas admit to feeling pressure from each other