Sato thanks fans, RLLR, media for support after “special” win

An exhilarated Takuma Sato said that the support he received from several directions since the Pocono wreck helped make his IndyCar victory at World Wide Technology Raceway all the more special. 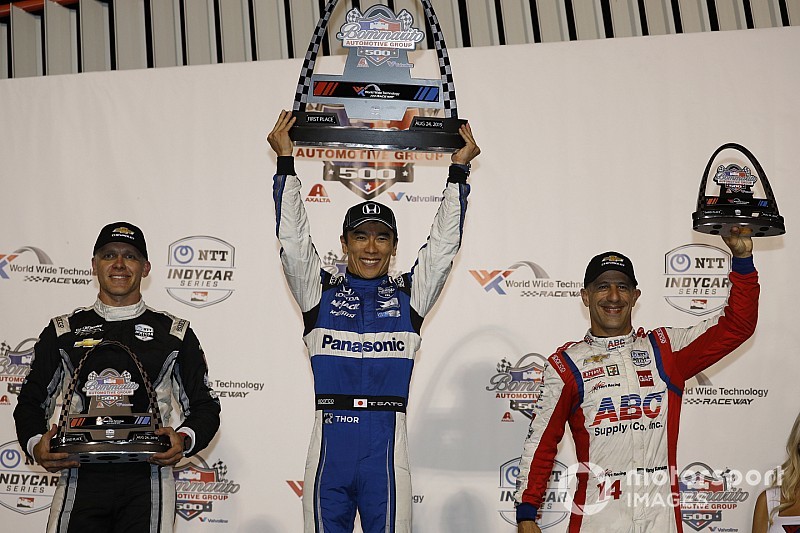 Just six days after being pilloried as the instigator of the five-car accident on Lap 1 at Pocono Raceway, Sato went from last to first – with the aid of a lucky yellow – and then held off oval specialists Ed Carpenter and Tony Kanaan over the final stint to claim his fifth IndyCar win, and his second of 2019.

The Rahal Letterman Lanigan Racing-Honda driver was in effusive mood after the triumph. He thanked the media for “mostly” being fair, praised the crowd for cheering him in the pre-race introductions – although there were some clearly audible jeers, too – and expressed his gratitude to team co-owners Bobby Rahal, Mike Lanigan and David Letterman for the support they showed in the post-Pocono fallout.

“I'd like to say thank you very much to all of you in this room,” he said on arrival at WWTR’s media center. “You saw what happened last week. Just a lot of opinion, for sure, I take it. Mostly you guys supported me. I can't thank you enough, as pure journalism – find the facts, find out what was it. Don't just judge one fact…

“When we go along the drivers parade, I think generally speaking at St. Louis we have so much enthusiastic fans. We've seen it last few seasons. This year the cheering, screaming my name so much. I just can't find the word to thank you for all the support. Was special, particularly after the difficult circumstances…”

Asked if, aside from the Indianapolis 500, his latest triumph was the most gratifying Sato replied, “Yes. I'm sure. Win and pole for Barber [this year] was very significant: just the domination of the weekend is always great credit for the team, and satisfaction.

“But this win is so special, like you said, beside Indy 500, obviously nothing like it. This is just so emotional; gave me unbelievable boost.”

Regarding his team owners putting out an official statement mid-week expressing their support for him, he remarked: “It is just unbelievable support from the team. I'm so happy. So proud to be a part of Rahal Letterman Lanigan Racing. Why they did that? Some people say they never seen a team do that kind of statement.…The team needed that statement to be done because so much information wrongly in the world. That's why they backed me up. I really appreciate it.”

The start of the race saw Sato sandwiched between Felix Rosenqvist and Ryan Hunter-Reay, and bumped wheels with the latter which got his RLLR car out of shape and saw him drift toward the back of the pack. Struggling for pace, he was the first of the drivers to make a ‘regular’ pitstop.

“A difficult start,” he recalled. “I was sandwiched, then go backwards. Was difficult to get away the first stint.

“But we were head down, do our job, believe in ourselves, take the moment for the chance to come back. We came back. We made a lot of good pace over the next two stints and stretched the fuel that we needed.”

Regarding his elevation to the front of the pack, Sato admitted he, Tony Kanaan of AJ Foyt Racing-Chevrolet and Ed Carpenter (ECR-Chevy) had been fortunate – “some luck maybe happened.”

When the final yellow flew for Sebastien Bourdais hitting the wall in his Dale Coyne Racing-Honda after a pitstop from second place, the race’s fastest cars had pitted under green-flag conditions, which had put them a lap down to the now late-stopping Sato, Kanaan and Carpenter. These three made their final stop once the pits opened with the field under caution, allowing the frontrunners back on the lead lap but still in pursuit of this somewhat unlikely trio.

Sato then had to ensure he kept the traditionally fast-restarter Kanaan in his mirrors at the drop of the final green.

“I think everyone know he’s one of the toughest competitors,” said Sato. “I have to make sure I don't give any space or showing any mistake.

“The last restart, perhaps it was really slow but consistent speed obviously. I had to take all the advantage just to control the pack. After that we just drive away beautifully, I would say.

“Excitement for the race – tire degradation. Tony and I had similar difficulty for the last 20 laps where Ed seems to be hooking up very, very good speed. I'm sure that the night of the show made very exciting for us. It was tough for the last five laps. Especially for the team and sponsor waited with very, very tough circumstance. I just wanted to bring the car home, which we did. Very, very happy.”

Once Carpenter passed Kanaan on Lap 245 of the 248-lap race, he quickly closed on Sato, but at the checkered flag the series only owner/driver came up 0.0399sec short.

“It was close, it was close,” agreed Sato. “For me, everything was under control. If he passed me, that's it, that's racing; he had a great moment. That's fine.

“But if I cross the line ahead of him, that's another form of result, which I love. I love this sport.”

Coyne eager to retain Ferrucci after another star performance