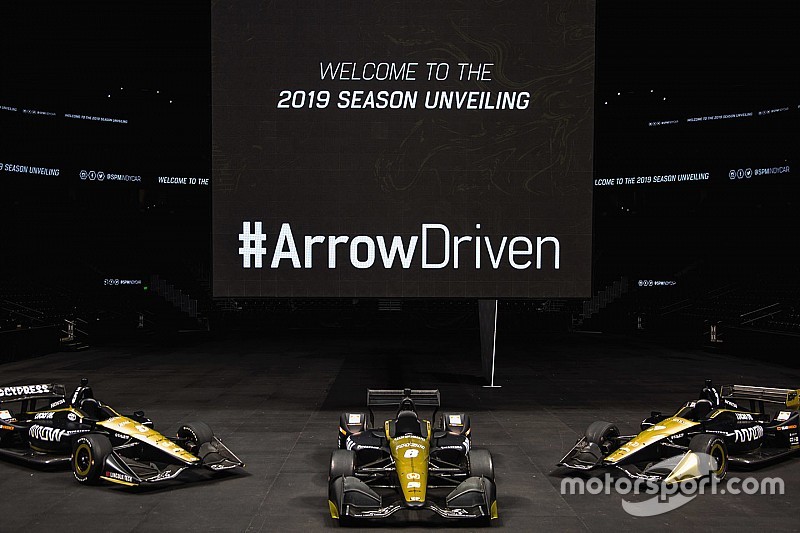 Sam Schmidt says that Arrow expanding its involvement in Schmidt Peterson Motorsports to become a full partner will help it get on terms with elite IndyCar squads Team Penske, Chip Ganassi Racing and Andretti Autosport.

Speaking at the team’s 2019 season launch, Schmidt said that Arrow Schmidt Peterson Motorsports no longer has any excuse for underperformance.

He told Motorsport.com and Trackside Online: “There are three boxes – financial resources, technical resources and people – and you have to check all three of those boxes to be successful at this level.

"And this naming rights deal allows us to do that, allows us to compete at the top level. So we will absolutely positively not be happy with 10th in the points this season.

“I knew four years ago that this relationship had the ability to do this, but it had to grow organically, had to pull those B2B pieces together and work our way up to it. But the fact that it all started with just a cold call to drive the Corvette [the semi-autonomous car developed by Arrow with Schmidt] is truly amazing to me.

“But it’s not just me, there’s a whole group of people behind the scenes who were raising the bar. I think we saw our true potential last year with Robert [Wickens] and James [Hinchcliffe] running at the front on a regular basis.”

Asked directly if SPM can join Team Penske, Chip Ganassi Racing and Andretti Autosport at the top level of IndyCar, Schmidt replied: “I hope so… although I liked being the underdog the last few years and having flashes of brilliance!

"But like Michael [Long, Arrow chairman, president and CEO] said, we’re here to win and now we have to be one of those four on a regular basis or we’re not living up to our expectations.”

Schmidt said he had faith that ex-Sauber Formula 1 driver Marcus Ericsson can make a strong impression in his rookie season.

“We’re starting from scratch with Marcus with the tracks and the car, but he’s extremely motivated to show the world what he can do," added Schmidt.

"The fact is, he’s plugging into the same engineer and same mechanics as Robert had, so if he’s not toward the front of the field, he needs to just look in the mirror [for an explanation]. Those are his words, not mine!

“So he’s got something to prove and I think that’s great. He’s brought his trainer. There’s so much attention to detail in Formula 1, way higher than ours, so just like Robert brought attention to detail to our program last year, we’re hoping Marcus will do the same thing.”

Schmidt admitted a lot of his positivity in 2019 stems from the fact that the series itself appears to be making progress with new commercial deals for races and the series itself, which is now sponsored by NTT.

“I don’t know any other motorsport properties that are having those kinds of announcements and that kind of impact.

“We’ve had great response from our hospitality efforts and everything we’re doing behind the scenes, and the bottom line is that we’re able to create business for Arrow and that makes it easier for them to justify this.”

Hinchcliffe: We were strong in 2018, now we’re even better