Schmidt Hamilton Motorsports scored its first win with Honda-power at Race 2 in the Indy Dual in Detroit with Simon Pagenaud at the wheel.

Sonoma, Calif., - Schmidt Peterson Motorsports (SPM) announced today that it has re-signed with Honda as its engine supplier for the 2014 IZOD IndyCar Series season. Honda Performance Development will supply SPM with 2.2-Liter V6 engines as it pursues the IZOD IndyCar Series Championship next year. 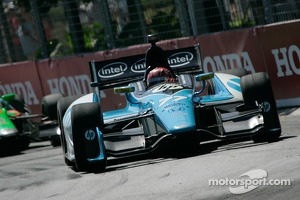 Honda tallied its 200th win in Indy car competition at Pocono Raceway in 2013, and continues to be a race winning contender at each Indy car race. Schmidt Hamilton Motorsports scored its first win with Honda-power at Race 2 in the Indy Dual in Detroit with Simon Pagenaud at the wheel.

"On behalf of fellow team owners Ric Peterson and Davey Hamilton, we are extremely pleased to have inked our deal for the future with Honda this early in the process," team owner Sam Schmidt said. "We are confident in their plan moving forward and believe that their package will be capable of competing for wins and the championship in 2014. This is also a testament to the commitment by all of our commercial partners and team members to maintain continuity and loyalty."

In 2014 Honda engines will utilize a twin turbocharger system, along with other improvements, in the first scheduled major revisions to the 2.2-liter, direct-injected V6 engines since their debut in the 2012 season.

"Since returning to full-time Indy car competition in 2011, Schmidt Peterson Motorsports has compiled an impressive list of results, including five podium finishes, the team's first Indy car win with Simon Pagenaud at Detroit and a second-place finish at the recent Honda Indy 200," said Art St. Cyr, president of Honda Performance Development. "This year in particular, the team has been impressive, adding a second car for Indy Lights graduate Tristan Vautier and with Simon (Pagenaud) currently ranked fifth in the driver's championship standings."

"We believe Sam, his partners Ric Peterson and Davey Hamilton, and the rest of the Schmidt Peterson Motorsports team will continue to develop into one of the top teams in the series. We look forward to continuing our association, adding more race victories and championships along the way."

Pagenaud almost as happy with Indy 500 car as last year