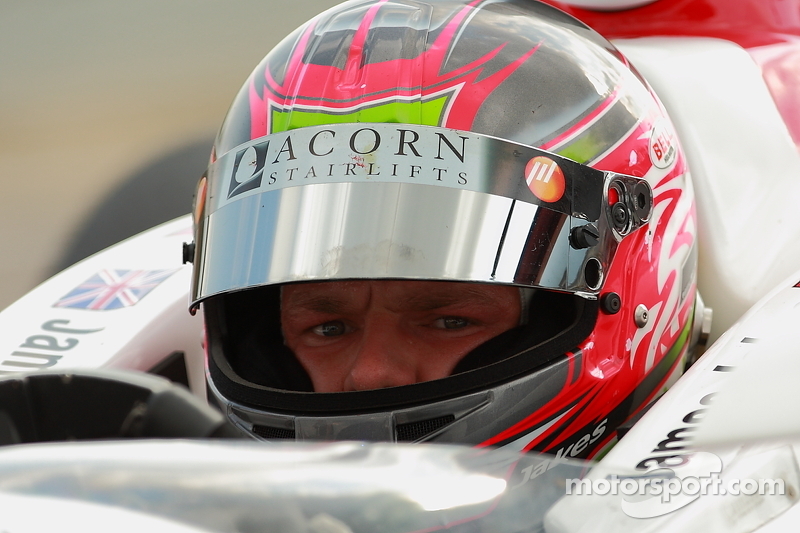 1. Heady times for first-year driver Jakes: The rising sun May 12 will elevate the temperature along with the anticipation of seven drivers seeking to compete in the Indianapolis 500 for the first time. James Jakes, a 23-year-old Orlando resident by way of Leeds, England, isn't immune. 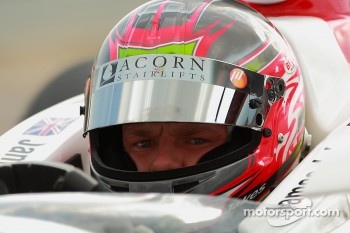 He might have driven in GP3 and GP2 on some of the grandest stages in Europe, but the first-year IZOD IndyCar Series competitor says nothing else compares to the 500 Mile Race. Emerging from the Pagoda for driver introductions to be greeted by the brightly colored sea of spectators, the pageantry of the ceremonies and the solemnity of the playing of "Taps" - with the bonus of the Indianapolis Motor Speedway marking the 100th anniversary of the race - will be a special occasion in Jakes' blooming career.

"I want to call it a sporting event but it's a global event," says Jakes, who will participate in the Rookie Orientation Program on the 12th before joining all entrants May 14 for practice on the 2.5-mile oval. "Everybody knows what Indy is, and when people are talking about it it's bigger than a one-day sporting event.

"You obviously have a lot of people telling you how it's going to be, but I've tried to lay back and take it as it comes. I'm trying to stay calm about it, but I do get excited from time to time. It's going to be a spectacular time."

"It isn't until you get fully involved with it that you realize the process," Jakes says. "Until a couple of months ago, I thought we'd have a few test days the week before and then we'd go race. It's a long process, and it's great because it gives rookies a chance to get up to speed and there is a lot of fine-tuning of the cars. I'm so excited to get going there."

The Dale Coyne Racing driver will have Alex Lloyd as an oval racing sounding board for the remainder of the season, just as he has worked with four-time Champ Car champion Sebastien Bourdais on the four road/street courses. Bourdais will return to the team for the five non-ovals on the calendar starting in July.

...it's great because it gives rookies a chance to get up to speed and there is a lot of fine-tuning of the cars.

"I think you have to be open; I have nothing to base it on," Jakes adds. "There's so much information that you just have to take it all in and use it. Don't go in with any preconceived ideas or it could backfire. I've never driven on an oval so it's going to be difficult, and what a one to start on. That's one of the reasons why you just have to be open-minded and take it as it comes.

"There's a lot of running, which is good. Indy will give us that whole week to build up and it should be a great (qualifying) weekend. Before you get to the four laps of qualifying I think you'll have a good idea of where you are. It's full power all the way around, and it's not as if a driver carrying 10 more miles an hour is going to happen. You're going to know on the Thursday or Friday where you're at, and if it's looking good you should be able to qualify. If it's not, then you just have to try to find something in the car, in yourself or the lines."

Jakes' No. 18 car has been running at the finish in three of the events - with a high placing of 15th in all three - and has advanced an average of eight positions in each.

"We've been quick in the races, but we're just taking too long to get up to speed in qualifying," he says. "What I've seen is what separates (the IZOD IndyCar Series) from a lot of other series is that even if you're at the back of the field you can race through and get a good result. We got up to second at St. Pete. We were quick. I made too many mistakes or we could have had a good result.

"Indy is a long race. You just have to be patient, have a good strategy and anything can happen." Jakes was a late addition to the Coyne car, getting in two days of testing at Barber Motorsports Park preceding the season opener a week later on the temporary St. Petersburg street course that included the debut of the double-file start/restarts. Two months later, he's convinced heading across the pond was the correct career decision.

"The exposure that IndyCar offers in the series, the TV is great," Jakes says. "For me, it was the right decision with the new car coming next year. Having to learn the tracks and then developing the car next year would have been doubly hard. Get the tracks out of the way this year. OK, there might be some additions, but you'll have driven on an oval so it was important to learn the tracks this year and there should be some good results out there for us."

2. Inaugural Mazda Road to Indy Oval Clinic is success: With the famed Indianapolis Motor Speedway as a backdrop, the future stars of the IZOD IndyCar Series and Indianapolis 500 got advice on racing on ovals from drivers whose history they'd like to emulate one day.

I want to compete at the highest level, and to do that I need to learn as much as possible in the junior formulas.

"I couldn't be more pleased with our first Oval Clinic," said Dan Andersen, owner and CEO of Andersen Promotions, the promoter of the Cooper Tires presents the USF2000 National Championship powered by Mazda. "Our drivers were presented with an unparalleled wealth of information, and I can't thank our instructors enough for not only taking the time to share their knowledge but for their enthusiasm for this program. I was equally pleased to see drivers like Stefan Wilson and Tristan Vautier attend, drivers who have previous oval experience and want to hone their skills. For our USF2000 field, this was a great segue into our oval test as many of our drivers prepare for their oval racing debuts this month."

The Oval Clinic, led by USF2000 driver coach Gerardo Bonilla - a Skip Barber National and IMSA Lites champion - covered all aspects of the intricacies of oval racing with the panel of experts presenting topics ranging from the basics of oval racing, physical training, testing, event practice, qualifying, racing, spotters and safety. In addition to racing footage to illustrate key points, drivers participated in pace car rides around the Speedway with Wheldon and Unser Jr.

"I'm always looking to learn more and I believe you never stop learning," said Wilson, who drives for Andretti Autosport. "I want to compete at the highest level, and to do that I need to learn as much as possible in the junior formulas. Even though I raced on ovals last year, I only did three events. It's great to hear from two champions and the other guys as well. All of of the experts combined experience was valuable. It's a refresher and there's a lot of things I can take away from today and implement in oval racing."

Among the lessons the willing class of drivers learned:

Dan Wheldon (about racing on ovals): "Michael Andretti told me this, 'On an oval the little things make a big difference.' So concentrate on getting all those little things correct with your car. If you feel something wrong, pit. "

Al Unser Jr. (about racing on ovals): "One of the things my father told me, 'Even if you're Hercules if car not working you're not going to win. Being sensitive on how handling is on the car. If you have loose car, it doesn't matter what kind of shape you're in, you are going to crash or go backwards."

USF2000 drivers were able to apply their skills almost immediately, as they went to Lucas Oil Raceway for a one-day test in advance of their race at the "Night Before the 500."

"It was a busy week but a really good week," said 18-year-old Petri Suvanto, the Finnish driver who leads the USF2000 point standings. "It was great to get back in the car again, and being able to sit down and talk to people like Dan Wheldon, Al Unser Jr., Johnny Unser and Steve Knapp at the Oval Clinic was a really good motivational experience. I learned so much. It's amazing what everybody involved in the Mazda Road to Indy program is doing to make all these sorts of things possible."

3. IZOD presents 100 years of Indy 500 fashion: In the city that doesn't sleep, teams of workers converged on Broadway and West 34th Street in the wee hours of May 9 to begin transformation of the display windows of Macy's flagship store into a celebration of the 100th anniversary Indianapolis 500. 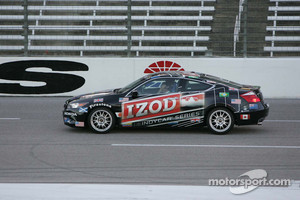 Iconic cars and other items of the '500' were moved into position in the display windows and inside the mamoth store at Herald Square in New York for "IZOD presents 100 years of Indianapolis 500 fashion."

The display officially kicks off May 11 with a 6 p.m. (ET) driver meet and greet at the store. At the store will be:

The Borg-Warner Trophy also will be on location for photo ops. The first 100 customers to make an IZOD purchase during the event will receive a free IZOD IndyCar cap.

There are two other large-scale autograph opportunities this week in the Indianapolis area.

From 6-7 p.m. (ET) May 12 at Macy's (second floor) at the Greenwood Park Mall, Indianapolis 500 champions Al Unser Jr. Arie Luyendyk and Gil de Ferran will greet fans. The first 10 customers who make an IZOD purchase of $50 or more will receive two tickets to the 500 Mile Race.