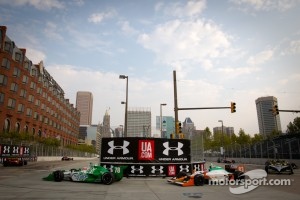 1. Downforce Racing selected as new Baltimore promoter: A partnership comprised of two Baltimore-based business entrepreneurs and an Indianapolis-based construction executive with extensive motor racing experience has been selected by Mayor Stephanie-Rawlings Blake to produce the Baltimore Grand Prix starting this Labor Day and continuing through 2016. The Mayor's selection is subject to review by the Baltimore City Board of Estimates.

Dawson and Reck are founding partners of Wilkes Lane Capital, LLC, which focuses on advisory services and private investing in the energy sector. Both are former executives of Constellation Energy. Dawson served as president and chief executive officer of Constellation Energy Commodities Group, Inc., and Reck was co-head of Origination in the same group.

Dale Dillon owns Dillon Construction Group and Dillon Racing, both based in Indianapolis. He has served as head of operations for Grand Prix races in St. Petersburg and Toronto, and was brought in to manage the operations of the 2011 Baltimore Grand Prix just weeks before the race.

The partners impressed the Mayor with their experienced executive leadership, significant credentials in race operations, and strong financial management capabilities. The goal, the partners emphasize, is to create an event that grows over time to become the premiere street racing event in North America. The 2011 Baltimore Grand Prix, they note, was a successful event for spectators and the local hospitality industry, and persuaded the IndyCar and American Le Mans organizations of Baltimore's potential as a race setting. There is sufficient spectator, business, and civic support for the race to be a profitable event for all parties involved. The race organizers expect last year's $47-million economic impact to increase as the event becomes a staple of the City's Labor Day activities.

Goncalvez will return to the No. 4 entry, in which he earned 10 top-10 finishes, five top-fives, four podiums and a fifth place finish in the point standings. Goncalvez recently competed in the 50th Anniversary Rolex 24 at Daytona with Michael Shank Racing with Curb/Agajanian and finished third in the marathon race.

"We are very happy to have Jorge back for a second season in Firestone Indy Lights," team owner Brian Belardi said. "A top five in the championship and the four podiums that Jorge earned last year were such great accomplishments for us as a first-year team, as well as for Jorge in his first year of Indy Lights.

"He has been working very hard during the off-season, as well as continuing his success with his third place finish at the Rolex 24. The guys have also been busy preparing for the season and prepping the cars for testing. I am really looking forward to our 2012 season with Jorge, and we cannot wait to go racing again."

With only 38 days until the season opener in St. Petersburg, Goncalvez will join his teammate, Alon Day, and the team in Florida next week for testing at Sebring International Raceway and Homestead-Miami Speedway.

"I'm really excited to be reunited with my team for my second year in Indy Lights," Goncalvez said. "It looks like I have a great teammate in Alon [Day], and I think we will have a very successful year. I have to thank my family and all my great sponsors for all of their support."

3. Firestone renews partnership with INDYCAR: Bridgestone Americas Tire Operations (BATO) and INDYCAR are pleased to announce that the Firestone brand will remain the IZOD IndyCar Series' Official Tire through at least 2014, and the Firestone brand will also serve as Title Sponsor and Official Tire to Firestone Indy Lights through the 2012 season. As part of this agreement, negotiations are already underway to extend the IZOD IndyCar Series sponsorship and supply contract beyond 2014.

The Firestone brand has competed in every IZOD IndyCar Series race since the series' inception in 1996, and it has been the Official Tire and sole supplier since 2000. In March, 2011, BATO and INDYCAR agreed on a two-year extension that secured Firestone's Official Tire status for the 2012 and 2013 IZOD IndyCar Series seasons. The Firestone Indy Lights contract was set to expire at the end of 2011, but included in the new agreement is a provision for Firestone to continue as the Official Tire of the development series for an additional year.

"As the IZOD IndyCar Series ushers in a new era of competition in 2012 and beyond with the new Dallara DW12 and engine diversity, Firestone Racing is pleased to continue supplying our world-class racing tires to each and every car on the grid for at least the next three years," said Al Speyer, Executive Director, Firestone Racing. "And, as we look to identify the next generation of IZOD IndyCar Series stars, Firestone Indy Lights drivers will continue to hone their craft on Firestone Firehawk race tires for another season.

"Our company has actively supported INDYCAR with more than just race tires," Speyer added, "and we'll continue to remain highly visible through our promotional activities and marketing initiatives around the series. It has been great to have the support of INDYCAR and the IZOD IndyCar Series and Firestone Indy Lights teams throughout this process as we have extended our long-term, successful partnership for the second time in one year."

In addition to its responsibility as Official Tire of INDYCAR, Firestone will continue to support the series through broadcast, digital and print advertising; at- track hospitality; title sponsorship of the Firestone 550k at Texas Motor Speedway; and Official Tire designation at events. Additionally, with this new agreement, Firestone will also have an enhanced presence at the IZOD IndyCar Series Fan Village, an entertaining, interactive experience for spectators at race events.

"Firestone continues to be a great fit for our sport, carrying on a 100 year-old tradition that began at Indianapolis Motor Speedway," said Randy Bernard, CEO, INDYCAR. "When our new car takes its first competitive laps on the streets of St. Petersburg in March, all of our drivers will take great pride in knowing that they have a reliable tire designed to maximize performance."

"How cool is this? I'm shocked and honored," said Hinchcliffe, who picked up his IZOD IndyCar Series rookie award along with the Tony Renna Rising Star Award at the State of INDYCAR program Feb. 13.

Hinchcliffe, who recorded seven top-10 finishes in 16 races for Newman/Haas Racing, will drive the No. 27 GoDaddy.com car this season for Andretti Autosport.

JR Hildebrand, driver of the No. 4 National Guard Panther Racing car who was the Indianapolis 500 runner-up and Rookie of the Year, is the cover story in the March issue of Racer.

5. Third set of new chassis ready from Dallara: Another batch of new chassis, totaling 15, is expected to be picked up by IZOD IndyCar Series teams this week from the Dallara Automobili facility in Speedway, Ind.

An IZOD IndyCar Series Open Test is scheduled for March 5-6 and 8-9 at Sebring. The season-opening

6. Of note: Travelers spending a few minutes in baggage claim at Birmingham International Airport can check out the new Dallara road course car on display until April 2…Jason Clark, former general manager of the Milwaukee Mustangs (Arena Football League) and assistant athletics director at the University of Wisconsin- Milwaukee, has joined INDYCAR as senior manager of partner strategy. … Sam Schmidt Motorsports has retained Front Row Marketing Services, a subsidiary of the sports and entertainment firm Comcast-Spectacor, to market and sell the team's commercial rights. … Tickets for the June 15-16 Milwaukee IndyFest go on sale March 1, but fans who would like more details or to be notified when tickets are available can sign up at www.MilwaukeeMile.com.