Honda's 100th win comes in a caution filled race, with another new winner in the IndyCar series.

Simon Pagenaud took the checkered flag in the second race at the IndyCar duals at Belle Isle in Detroit, in a race filled with cautions and tempers.

The win was the first for the Frenchman in the IndyCar series, and the 100th for Honda. Additionally, Pagenaud is the sixth winner in seven events.

"It’s unbelievable. I don’t know how we did it," said Pagenaud. "It’s a great feeling. One I hope of more to come. I started karting when I was 8 so it's been 21 years of hard work to finally win an IndyCar race. It was the toughest race of my life (in Race 1 on June 1 when he started eighth but finished 12th) and my engineers improved everything. The car was just super fast and strategy was awesome. Every restart we just went forward." 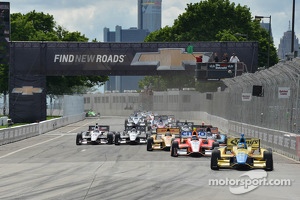 Rounding out the podium were James Jakes and yesterdays winner Mike Conway.

Quick work by the Rahal Lanigan Racing could be credited with getting him in contention for the podium.

"It’s huge for a lot of people," said Jakes, who started a career-high second. "Three Hondas on the podium in Detroit again. They’ve really worked their butts off since Indy and we’re proud of them. The car was just magical today."

For the sec on race in a row, Penske driver A.J. Allmendinger was unable to complete a full lap, wrecking in turn two as the field sped by.

INDYCAR's road to the future

What's next for the 'Dinger?