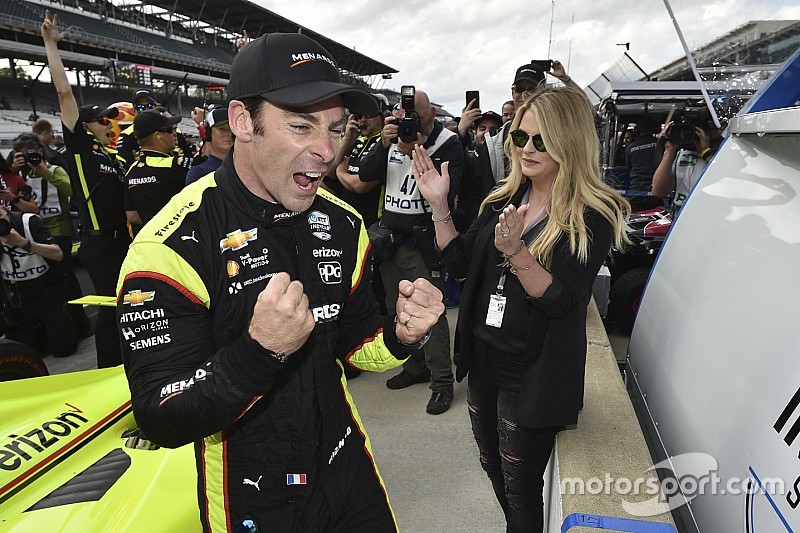 Simon Pagenaud won his first ever Indy 500 pole position, and Team Penske’s 18th, defeating Ed Carpenter and his teammates with a beautifully consistent run in the Fast Nine shootout that averaged 229.992mph.

The Frenchman, who just last Sunday won the IndyCar Grand Prix, turned a beautiful run in the Penske-Chevrolet with three laps above 230mph and a 229.7 on his fourth to knock three-time Indy polesitter Ed Carpenter from the top spot.

When neither his teammate Will Power nor Carpenter’s teammate Spencer Pigot – fastest yesterday – could match his speed and consistency, Pagenaud held on to top spot.

Despite generally being third fastest ECR car all week, Carpenter will start from the middle of the front row with a 229.889 average, just a squeak ahead of his former Indy Lights champion teammates Spencer Pigot and Ed Jones.

Colton Herta was fastest Honda driver, nailing fifth place with a great 229.086mph average, eclipsing 2018 Indy 500 winner Power who couldn’t explain where his speed had gone, but whose car looked more wayward than that of Pagenaud.

Sebastien Bourdais was seventh in the Dale Coyne Racing with Vasser-Sullivan Honda to beat the third Penske of Josef Newgarden, while Alexander Rossi was a slightly anti-climactic ninth in the fastest of the Andretti Autosport-Hondas.

McLaren will not buy an entry for the Indy 500