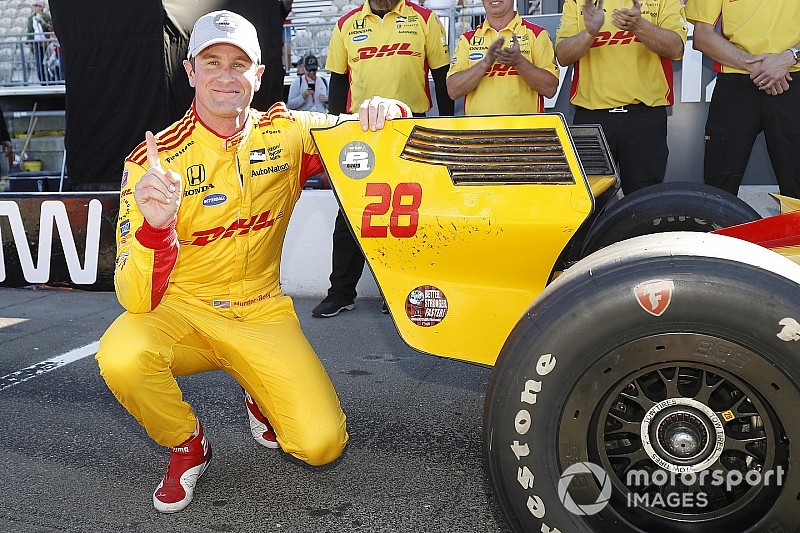 Ryan Hunter-Reay took his first pole since April 2014 and the seventh of his career in the season finale by edging Chip Ganassi Racing’s Scott Dixon, while Indy Lights champion and IndyCar debutant Patricio O’Ward qualified an amazing fifth.

Hunter-Reay’s 1min17.6277sec lap of the 2.385-mile Sonoma Raceway came in the dying seconds of the session, edging points leader Dixon by 0.1322sec, and stealing a potential bonus point from him.

Hunter-Reay’s teammate Alexander Rossi, who lies 29 points behind Dixon in the title fight, elected to save a set of Firestone alternate tires for the race, and thus ran only black primaries in the Firestone Fast Six.

He will start sixth alongside the sensation of the session, Harding Racing-Chevrolet’s O’Ward, who was less than 0.35sec off taking pole position. The Mexican rising star ran only one lap in the final session but was thrilled by an amazing debut.

The second row will comprise Josef Newgarden in the fastest of the Team Penske-Chevrolets, and Andretti Autosport's Marco Andretti who, like O’Ward, started both the Q2 and Q3 sessions on reds, without bothering with sighting laps on primaries.

Penske’s Will Power and teammate Simon Pagenaud will start seventh and eighth, as Power explained that he and the team had tried to save some life in his reds for Q3 by relying on just a single flying lap in Q2. The tactic failed and he will share the fourth row with Pagenaud, ahead of Graham Rahal’s Rahal Letterman Lanigan Racing-Honda.

Zach Veach running onto the Turn 9A dirt on his set of reds relegated him to 10th, ahead of Sebastien Bourdais’ Dale Coyne Racing with Vasser-Sullivan entry and the second RLLR car of Takuma Sato.

Pietro Fittipaldi qualified an impressive 13th fastest for Dale Coyne Racing while teammate Santino Ferrucci was less than 0.1sec slower but will roll off seven places further back.

Ed Carpenter Racing duo Spencer Pigot and Jordan King were disappointed with 17th and 25th, the latter setting his best time on the black primary Firestones after encountering a mechanical problem when he switched to the softer reds.