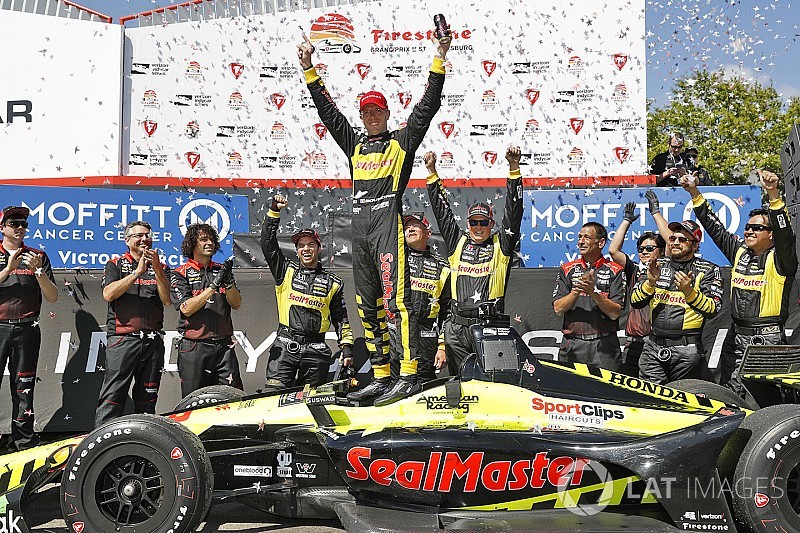 Sebastien Bourdais scored the 37th win of his Indy car career and his second in a row at St. Petersburg, after Alexander Rossi took a huge chance on the final restart and wiped out long-time leader Robert Wickens.

Two series veterans suffered on Lap 1, as Ryan Hunter-Reay immediately dropped into the pits for an ECU reboot from the Andretti Autosport-Honda team while Will Power spun his Penske-Chevrolet at Turn 2 as he ran out of room and went up on the curb to avoid clattering Schmidt Peterson Motorsports’ polesitter Wickens. Power’s spin sent him rear-first backed it into the wall on the exit.

Further around the lap Tony Kanaan was sent nose-first into a wall after a collision with Zach Veach, while Charlie Kimball spinning and stalling his Carlin entry in what was deemed a dangerous place brought out the full course yellow.

As soon as the pits were open, Power was in for a replacement rear wing and a new set of tires, and Hunter-Reay came for a fuel top-up.

The restart saw three rookies – Wickens, Jordan King (Ed Carpenter Racing-Chevrolet) and AJ Foyt Racing’s Matheus Leist – lead the charge to the green, but King passed Wickens for P1. All seemed in order until the following lap when Rahal and Pigot came together at Turn 1. Pigot stalled, bringing out another yellow. Race Control decided no action should be taken for the clash.

For the next restart, King and Wickens led Rossi, Leist, Hinchcliffe, Sato, Pagenaud, Dixon, Chaves and Newgarden. However, King ran wide on the restart allowing Wickens back in front while Leist grabbed third from Rossi, and Dixon and Chaves demoted Pagenaud.

It was only a temporary setback for Rossi who was back up to second on Lap 12, albeit 3sec behind Wickens. Two laps later, that gap was down to two seconds and King was 3sec down on the leader. Sadly, Leist was stuck in fourth and cruising to the pits, promoting Sato, Hinchcliffe, Dixon, Chaves, Pagenaud, Andretti and Kanaan.

Having climbed back to 16th, Power pitted on Lap 18 for black primary tires, with Hunter-Reay pursuing a similar tactic,  and Ed Jones stopping his Ganassi #10 soon after.

Wickens and Rossi, 1.3sec apart, were in a race of their own, 6sec up on King, while from the lower reaches of the top six, Hinchcliffe and Dixon stopped on Lap 20. Pagenaud appeared to stall in his first stop and fell behind the Jones, Newgarden, Power, Hunter-Reay battle.

Rossi managed to make his red tires last until lap 23 before pitting for blacks, while King went a lap longer, and Wickens a lap longer still, leaving 2017 St. Pete winner Bourdais (Dale Coyne Racing-Honda) up front having stopped under caution on Lap 4 for a flat tire.

Wickens rejoined with three cars between himself and Rossi, and thus comfortably held his lead. Fellow rookie Leist suffered a sad demise a few laps later. After going 12 laps down while his electronics were fixed he was released from pitlane with fuel equipment attached, returned to pitlane for a drive-through and then shunted on the exit of Turn 3.

Power passed Newgarden and Jones for 14th but Newgarden fought back just before the yellows flew for Leist’s shunt.

The restart was clean but tight, but next time by, Dixon dived down the inside of Hinchcliffe and shunted into the back of Sato. The Ganassi car broke a front wing, and the Rahal Letterman Lanigan Racing-Honda had a right-rear puncture, and the pair limped to the pits under caution.

Dixon was sent to the rear of the field for avoidable contact, while King chose this opportunity to pit as he was suffering a deflating tire.

The Lap 39 restart saw Wickens slice up the inside of Bourdais to grab the lead – it seemed nothing could intimidate him. Rossi and Andretti did likewise to demote Bourdais to fourth.

But it was Team Penske president Tim Cindric who appeared to pull a masterstroke, pulling Newgarden into the pits just before the full course yellows flew for a fifth time – on this occasion for Jack Harvey’s damaged car down at the Turn 14 hairpin.

Newgarden was able to rejoin with a full tank of fuel and at the back of the field, waiting for everyone else to make their second stops – or third, in some cases. But when the pits opened again, Newgarden returned to the pits for another top-up. Bourdais, meanwhile, pitted and resumed 14th, with De Melo also stopping.

The Lap 45 restart saw Wickens, Rossi, Andretti (on reds), Hinchcliffe, Hunter-Reay, Pigot (reds), Kanaan, Power, Chaves and Pagenaud as the top 10, and for once they stayed in this order for a lap, although Andretti did have a long look at Rossi. On failing to get through, he would swiftly drop 5sec behind the 2016 Indy 500 champion, and he’d have to work hard to hold off Hinchcliffe.

Andretti stopped on Lap 53 for his first set of black primary tires of the day, and Pagenaud and Sato dropped out of the top dozen to do the same.

On Lap 54, Kanaan and Power pitted from a close sixth and seventh, and they emerged with Power narrowly ahead, but they were now down in 15th and 16th.

Up front at the halfway point, meanwhile, Wickens was driving like a series veteran – in fact, way better than most of the veterans who had blundered at some point during the race. Wickens stopped on Lap 60 for more blacks, allowing Rossi in front, as Hinchcliffe followed his SPM teammate in, while Rossi also grabbed fresh blacks but one lap later.

However, the Andretti driver emerged four seconds down on the flying Wickens, and although the Canadian was caught up behind Rahal who was due a stop, he disposed of him at the start of Lap 65 and closed in on leader Bourdais, who tried to respond with his fastest lap of the race.

Hinchcliffe was keeping the second SPM car in the mix too, passing Ed Jones for fifth on Lap 68 to try and close down on Rossi who was only inching up on Rahal’s third-place car.

Andretti got back into the Top 10 with a pass on Claman De Melo’s Coyne car, while Rossi passed Rahal for third on Lap 75, and started trying to carve into Bourdais’ lead. Bourdais pitted on Lap 77, as did Rahal, Jones, Dixon, Newgarden, and De Melo.

Dixon’s day went from bad to worse when he got a drive-through penalty for a pit speed violation. Andretti stopped on Lap 79, then Wickens, Hinchcliffe and Power pitted on 81, with Rossi hitting pitlane on Lap 83.

Briefly Hunter-Reay took the lead but all eyes were on the Wickens vs Rossi vs Bourdais battle for what would effectively be the lead when RHR pitted on Lap 85. Wickens was 2.9sec ahead of Rossi who in turn had 4.3sec on Bourdais.

The situation swiftly changed. Bourdais had nothing for the leading pair, and Rossi chiseled the lead down to six tenths of a second on Lap 90. Further back, a red-tired Dixon demoted Newgarden to ninth and moved onto the tail of Jones, who he passed at the start of Lap 97.

However, the Ganassi pair were now 11sec behind Hunter-Reay, who was trying to make the Rahal-Hinchcliffe battle for fourth into a trio.

With 12 laps to go, the leading pair came up to lap Kimball and Claman De Melo, and Kimball made it easy, but Rossi slid wide and dropped to 3sec behind the leader.

But within a couple of laps of what looked like a damning sentence came Fate’s reprieve – debutant Rene Binder slid into the tire wall at Turn 10, the cautions flew, and the field bunched. There were four laps left by the time the green flag flew.

The restart was clean until Chilton spun and stalled, bringing out a yellow. Then there was two laps to go at the final green, and that restart turned to soup.

Rossi dived down the inside of Wickens but his tail was already swinging out wide under hard braking before the apex, and it struck the Schmidt Peterson car, sending Wickens into the tire wall.

That slowed Rossi enough to allowing Bourdais through to his second successive St. Petersburg victory and the 37th win of his Indy car career, and Rahal into an unlikely second place, up from the back of the grid. No action was taken over Rossi’s indiscretion, so he got to keep third place.

Hinchcliffe was fourth – small consolation for Schmidt Peterson – ahead of Hunter-Reay and Dixon.

Newgarden made a strong final restart to grab seventh from Jones, while Andretti did enough to push Power down to 10th, ahead of Kanaan, Pagenaud, Chaves, Pigot and Veach.