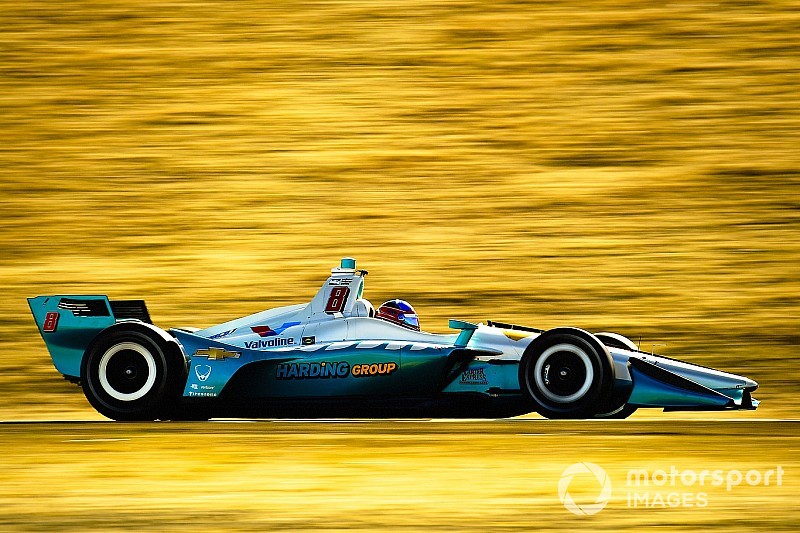 This Harding Steinbrenner Racing team line-up, heavily revised from the structure in which sophomore IndyCar team Harding Racing-Chevrolet ran the majority of the 2018 season, effectively made its debut at last weekend’s season finale at Sonoma Raceway. O’Ward, in particular, starred on his debut, qualifying a remarkable fifth and finishing ninth.

Steinbrenner, who partnered with Michael Andretti to run Colton Herta in Indy Lights for the past two seasons, is the 22-year-old grandson of the legendary New York Yankees baseball team, and son of the Yankees’ current part-owner and co-chairman, Hank Steinbrenner IV.

He will become the youngest team owner in IndyCar history, while the combined ages of 19-year-old O’Ward, from Mexico, and 18-year-old Californian Herta is less than that of several current individual IndyCar drivers.

Said Steinbrenner: “I am extremely excited to make the leap into the IndyCar Series. Since I was a kid, it has been my goal to be a team owner in the IndyCar Series and I’m so excited to be doing that with Harding Racing. They are a team that shares our values that they don’t want to just be here, but to be a dominant mainstay in the series.

“That will continue to be our goal as we head into a partnership with a team that shares the same ideals and it makes life a heck of a lot easier. Excited to have two of the best young drivers on this continent and to have them both make the leap into the IndyCar Series at such a young age as teammates with Harding Steinbrenner. We’re looking forward to watching as they mature and fight to beat the grizzled veterans in the IndyCar paddock.

“We’re so excited to see where that will lead, how the team can grow, and how we’ll compete so we can hopefully vault ourselves to the top of IndyCar pylons.”

Added Mike Harding: “The 2018 IndyCar season has been a tremendous learning experience for me. Now I am eager to join with Steinbrenner Racing and create the powerhouse team I know Harding Racing can be. George Michael Steinbrenner IV entered the Mazda Road to Indy with the intent to win, and I believe Harding Steinbrenner Racing will quickly impress the IndyCar paddock too. Let’s go racing!”

“It's a super dream, I could not be in a better position,” O’Ward told Motorsport.com. “We did very well at the weekend in Sonoma. The truth is that with the opportunity that they are giving me, it is very special, I want to take advantage of it. I know that next year I will be in good hands and I want it to start. We will have help from Michael Andretti regarding the technical side of the car.”

The 19-year-old from Mexico added that he felt his arrival in IndyCar might help the series expand its reach in the near future, but anticipates that for 2019, the new IndyCar race at Circuit of The Americas and the Indy 500 will be where he receives most attention from his compatriots.

“I think the championship is growing impressively and I feel there could not be a better time, because we are visiting new places and hopefully in 2020 we can return to Mexico. I feel that the category will be growing in a very important way.

“I believe that Austin and the Indianapolis 500 are the races where I’m most imagining being in the car. Austin is very close to home so I hope a lot of fans go to support a Mexican, and the 500 is very important and basically it is a race to make history.”

“I am so thrilled to finally announce the plans for next year,” said Herta. “I know it’s been a long time coming. After having a good time in Sonoma and dipping my feet into IndyCar, it makes me way more enthusiastic than I was before.

"This is all possible because of Mike Harding and I want to give a big thank you to the Steinbrenners. There is a lot to do, but I’m ready to get my head down and focus forward for the 2019 IndyCar season.”

Team president Barnhart told Motorsport.com two weeks ago that a Herta/O’Ward lineup was a possibility for 2019, explaining that a single-car entry – as raced by Gabby Chaves for three races in 2017 and the majority of this season, and three races by Conor Daly – made it “virtually impossible” to be competitive with the giants of the sport.

O’Ward agreed, stating: “It is very important to have a second car to be exchange information. That second car will help a lot because you have to compare many things in the weekend.”

Why Scott Dixon is a five-time IndyCar champion