Susie Wheldon accepted the 2011 Champion of Champions ring for her late husband, Dan Wheldon, in a respectful ceremony held today at the Indianapolis Motor Speedway. The ring goes to the previous year’s race winner, and Mrs. Wheldon gracefully accepted the ring from Ken Keltner of Herff Jones.

The 14-karat gold ring contained a one carat diamond. 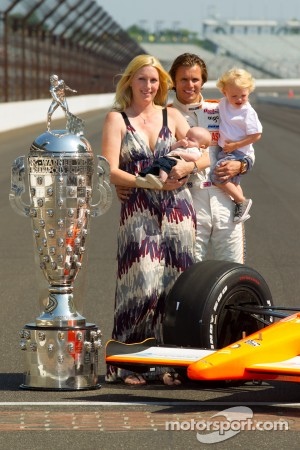 Said Belskus, “The 2011 Indianapolis 500 was a very special race with a special ending of a pass in the final turn of the last lap. We had a very special winner in Dan Wheldon, and it was a very memorable finish for all of us.”

Mr. Keltner made the official presentation with Mari Hulman George by his side. “On behalf of Herff Jones, we want to commemorate Dan Wheldon’s victory by giving you this Champion of Champions ring to you (Susie Wheldon),” he said. “Dan will always be remembered and loved as one of the most competitive race drivers we have ever had here. Of all the drivers who have competed here, Dan will always be remembered and revered as a true champion of champions.”

In accepting the ring, Susie Wheldon opened her remarks by giving special thanks to their friends and supporters around the world for their kindness during her time of need. “I am honored to be here to accept the Champion of Champions ring for my husband,” she said. “Dan loved the Indianapolis Motor Speedway and what it meant to win here. I am proud to be here to represent him as a two-time winner and am proud to be here with my children, Sebastian and Oliver, to celebrate their father’s life and legacy.”

After the well-attended ceremony concluded, Mrs. Wheldon proudly displayed the ring to the photographers and television crews that were in attendance.

Conway happy with car, confident going into the Indy 500