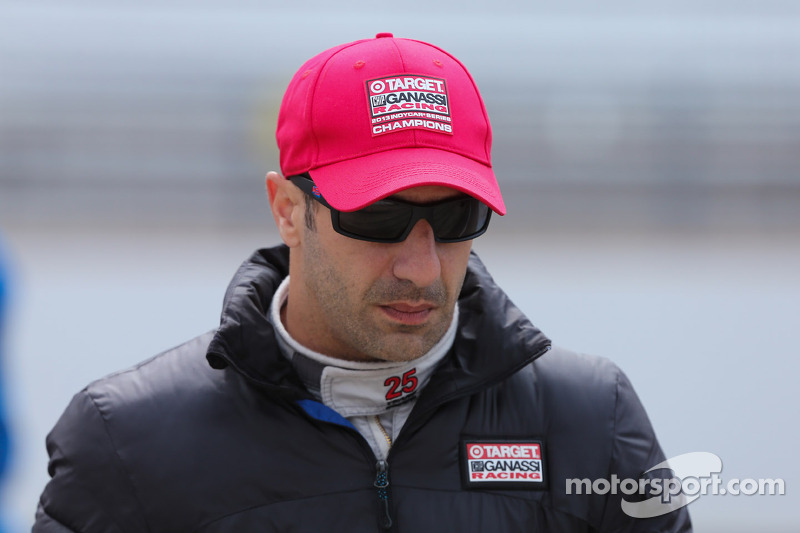 Tony Kanaan and Scott Dixon get ready for the next street course on the IndyCar schedule.

BET YOU DIDN’T KNOW THAT

Double Trouble Kickoff: The Belle Isle dual is the first of three double-header weekends in the 2014 Verizon IndyCar Series season. The second double-header will take place at Reliant Park in Houston, Texas on June 28-29, and the third will be on the streets of Toronto, Canada on July 19-20.

Divide and Conquer: On May 20, Dixon and Kanaan joined Ganassi the Indianapolis 500 starting roster in promoting the race across the nation. Dixon ventured into downtown Chicago, Ill. for press appearances and then visited the Cubs, throwing the first pitch of the game at Wrigley Field. Kanaan flew to Arlington, Texas and tried out the go-karts and Wahoo Racer waterslide at the Six Flags Hurricane Harbor waterpark.

Follow the Leader: On May 22, Chip Ganassi was inducted into the Auto Racing Hall of Fame alongside Jimmy McElreath, Leo Mehl, Bobby Rahal and Bill Simpson. There are now 148 members in the elite fraternity, which is located at the Indianapolis Motor Speedway Hall of Fame Museum.

Special Starting Spot: Dixon started the 98th running of the Indianapolis 500 in the fourth row, alongside Juan Pablo Montoya and Kurt Busch. The lineup was labeled the “Row of Champions” due to the cumulative achievements of the trio, including seven victories in Formula One, 34 in IndyCar, 11 in CART and 37 in NASCAR. The group also held two Indianapolis 500 wins as well as three INDYCAR championships, a CART championship and a NASCAR Sprint Cup Championship.

Out But Not Down: Former Target Chip Ganassi Racing driver Dario Franchitti received the honor of being named the pace car driver for the 98th running of the Indianapolis 500. The four-time Verizon IndyCar Series Champion and three-time Indianapolis 500 Winner led the field around during cautions in a 2014 Chevrolet Camaro Z/28. After retiring from his racing career at the end of 2013, Franchitti returned to Team Target in 2014 as a driving advisor for Chip Ganassi Racing Teams. Franchitti assists the team as it adapts to recent lineup changes and additions, and was on site with the team for the inaugural Grand Prix of Indianapolis and the Indianapolis 500 earlier this month. He will continue to work closely with the teams’ Verizon IndyCar Series drivers throughout the duration of the season.

100+ Wins and Counting…: The Target Racing Program, which began with Target and Chip Ganassi Racing in 1990, will be contending for their 104th win as the season progresses. The first win for the program came in 1994 with Michael’s Andretti’s Indy car victory at Surfers Paradise, Australia, when the team was a two-car, Indy car program. 102 wins later, the program’s umbrella not only includes involvement in the Verizon IndyCar Series, but in the NASCAR Sprint Cup Series and the TUDOR United SportsCar Championship. The partnership between Target and Chip Ganassi Racing is one of the longest consecutive team partnerships in motor racing history.

((WHAT YOU NEED TO KNOW FOR BELLE ISLE

Scott Dixon and No. 9 Target Team

The Best Defense Is A Good Offense: Dixon will spend the 2014 season attempting his first successful defense of a Verizon IndyCar Series title. "I think it's obviously a good problem to have," Dixon said. "I've been in this situation a couple of times before… I think we need to focus on making a good start in the first three or four races." His closest effort so far came in 2009 when he finished second to teammate Dario Franchitti by a mere 11 points. If Dixon is successful, he will become the 14th driver to have at least two consecutive series championships.

Go with What you Know: 2014 marks Dixon’s 13th year with Team Target – the longest tenure for a driver in team history (1990-Present).

Tony Kanaan and No. 10 Energizer Team

Success in Motown: Kanaan won the 2007 Detroit Indy Grand Prix Presented by Firestone on the streets of Belle Isle and placed third the following year (2008).

TK Joins The Team: 2004 Verizon IndyCar Series Champion and 2013 Indianapolis 500 Winner Kanaan joins TCGR in 2014 for his first season alongside three-time Champion and 2008 Indianapolis 500 Winner Dixon. Kanaan has 16 career wins and 15 poles entering the 2014 season, and will seek to add to his record for consecutive Indy car starts, which is at 217. Only three other active drivers (Dixon, Marco Andretti, Ryan Hunter-Reay) possess a streak of more than 100 consecutive starts. Competing in every race will push his career starts total to 295 – which would be good enough for ninth on the all-time list. Kanaan has 112 career top-five finishes and is tied for the title of active leader with Helio Castroneves. He is ranked fifth for the number of victories among active full-time drivers in the Verizon IndyCar Series.

No Time To Waste: Kanaan started second on the Streets of St. Petersburg, the first race 2014 season of the Verizon IndyCar Series. The front-row start matched the best-ever start in a debut for a driver in Team Target’s 25-year history. Indy car legend Michael Andretti started second and won for TCGR in his first race in Australia (street course) in March of 1994.