INDIANAPOLIS, Ind. (May 24, 2013) – Team Penske ran its final practice laps for the 97th Indianapolis 500 and made a statement about pit stop performance Friday during Carb Day festivities at the Indianapolis Motor Speedway.

All three drivers completed their final shakedowns with solid speeds throughout practice. But the highlight of the day was Team Penske’s win with Helio Castroneves’ No. 3 Shell-Pennzoil team in the Indy 500 Pit Stop Challenge. 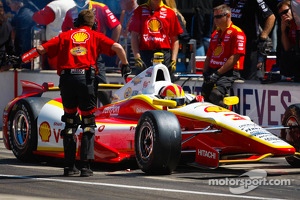 In the hour-long practice session earlier in the day, AJ Allmendinger led the way by posting the 13th-fastest lap among the 33 entrants in Sunday’s race with a lap of 224.106 mph in the No. 2 IZOD Team Penske Dallara/Chevrolet. Allmendinger will start fifth in Sunday’s race, which begins shortly after noon ET.

“The IZOD Team Penske Chevrolet is really quick and we’ve spent some time working on the downforce levels so they are where I am comfortable,” said Allmendinger, whose fifth-place starting position will lead Team Penske during Sunday’s 500 mile race. “I feel good about all the practice we’ve had so far and the IZOD Team Penske crew has worked really hard to give me a fast car. The way I see it is if I do the best I can and we get some breaks during the race there is no reason why we can’t be in a position to win the race at the end.”

Will Power, who will start sixth on Sunday, was 15th-fastest Friday at 224.047 mph in the No. 12 Verizon Team Penske Dallara/Chevrolet. Power is set to start on the outside of teammate Allmendinger during “The Greatest Spectacle in Racing.”

"We were reasonably fast in the Verizon Team Penske Chevrolet today,” said Power, who is working towards both his first win at the famed Brickyard and his first win of 2013. “The Verizon guys have done a great job preparing us for the race. We are very close to where we need to be for the race. We'll make a few small tweaks and then give it our best come Sunday.”

Three-time Indy 500 winner Helio Castroneves, who will start eighth, had a lap of 222.026 mph in the No. 3 Shell V-Power Pennzoil Ultra Team Penske Dallara/Chevrolet, the 28th-fastest lap of the day.

"Today was an interesting day for the Shell V-Power Pennzoil Ultra Chevrolet because the team switched engines the other day so we weren't fully up to speed to run with the rest of the field,” said Castroneves, who lead Team Penske in four of the daily practice sessions since May 11th. “We'll be up to speed for the race. We have had a lot of practice to get us to this point and now it’s time to show what we can do. My job is to put us in a position to win at the end of the race and I can’t wait for the challenge.”

Castroneves’ crew for the No. 3 car won three rounds of the pit stop challenge, including the championship round against Dario Franchitti’s team with a final stop of 10.107 seconds. The victory was Castroneves’ sixth as a driver, most among Team Penske drivers, and increased Team Penske’s record total to 14 pit stop wins since 1977, including seven of the last nine years.

“I could not be happier for the guys on my Shell Pennzoil team,” added Castroneves, who won the Pit Stop Challenge before his wins in 2002 and 2009. “Them pulling out the win today was awesome. We made some changes during the off season so for these guys to come together and pull out the win against some of the best guys in the business was great."