Mark Wilkinson gives his take on the IndyCar race at Texas Motor Speedway.

Mac Davis, a Texas singer/songwriter had a hit called “Texas in My Rear View Mirror” which had Davis eager to leave his hometown, and after seeing what life was like in the big city, just as eager to return home when things did not work out. As IndyCar fans look back on the Firestone 600 at Texas Motor Speedway, the dichotomy that is IndyCar in Texas rears its head once again.

After some acrimony between promoter Eddie Gossage and the IndyCar drivers in past seasons, it was good not to see the sub-tweeting¹ that was evident in recent years as the drivers lobbied for an end to pack racing and a safer fencing system, and Gossage lobbed suggestions that the drivers lacked the courage necessary to drive at Texas. In interviews this year, Gossage was all smiles and support for the race and the Verizon IndyCar Series. Somehow, this is worrisome. 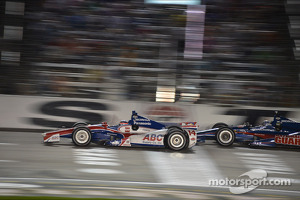 In any case, the race played out somewhere in the middle between the “Oh my god, did you see that!” race of 2012 and the rejiggered snooze-fest that was 2013. For whatever reason, the technical brain-trust at IndyCar decided to change the aero specs after the great race of 2012. It was swing and a miss resulting in the 2013 follow-the-leader contest. This year, at least for the IndyCar aficionado, strategy with tire wear became the only strategy that mattered. Cool if you dig that sort of thing but not likely to engage the much sought after millennial fans out there. I was engaged because I was able to follow the tire degradation through lap times and to anticipate pit stops. Then again, I had TV, my laptop, and the Verizon IndyCar 14 app (which works in my house as opposed to at the track) to follow the action. Most fans do not want to do this. They simply want to be entertained.

I think the crew at NBCSN did a good job of entertaining the fans with pictures of passing back in the running order. Tire strategy, since it was the only strategy at work, was highlighted in the broadcast and actually had me sitting forward as decisions were being made to pit or not to pit as speeds progressively slowed as tires wore out. Again, cool for the enthusiast.

Would the race be better if there were more passing like at Indy? Sure. It’s a thin line that the rules tinkerers at IndyCar have to walk. A small change in aero can have a profound effect on the racing. Add the Firestone tire and how quickly it goes away and you can see how difficult it is to create the perfect recipe for racing. The chefs at IndyCar are always going to be adding a pinch of aero or a dash of tire degradation to the racing everywhere, but the barbeque at Texas will always be the track where too many cooks can spoil the racing.

Anyone watching the race who understood the strategies in play, sat up when the final caution happened. What would everyone do? Will Power, stuck in 5th from his speeding penalty, took on fresh tires and made eventual winner Ed Carpenter an algebra problem. Math dictated that Power would pass Carpenter; the question was when. That was compelling racing for a hard-core fan.

The Firestone 600 was a great race for the knowledgeable fan; it was the same thing over and over for the casual fan. I guess the question that the Verizon IndyCar Series has to answer is this: Which fan is most important for the future? The Firestone 600 and its willingness to promote its product may be the test kitchen for determining the tastes of the IndyCar fans of the future. Bon appetit, IndyCar.

¹ Sub-tweeting is posting a message about someone on Twitter where you don’t mention the person’s name but it is very clear to whom you are referring. It is insulting someone with plausible deniability.

Sibling rivalry: the plight of the GP of Indianapolis

Kirkwood arrival will help Foyt “get the best people”