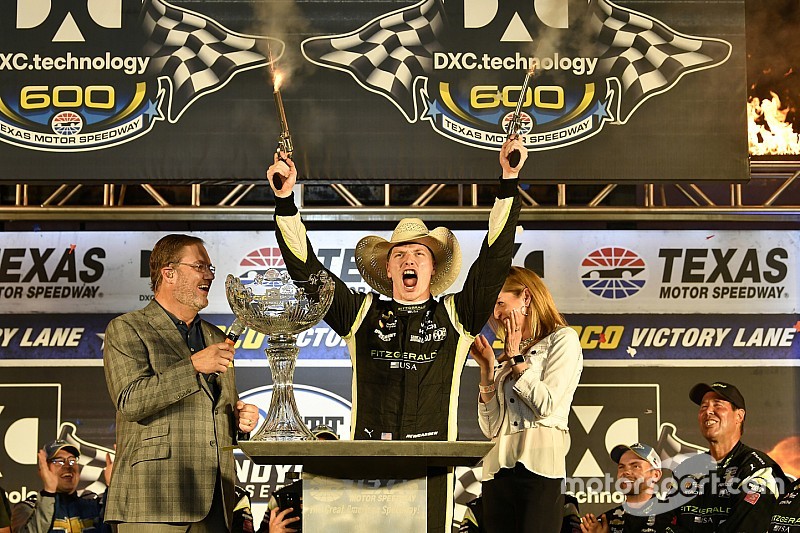 Team Penske's Josef Newgarden held off title rival Alexander Rossi in a thrilling finish at Texas Motor Speedway to score his third win of the IndyCar season at Texas and extend his points lead.

Rossi and Colton Herta both got around Newgarden on Lap 10 to push the points leader down to 10th, while Zach Veach passed Graham Rahal for 11th next time by.

By Lap 20, Sato had pulled 2sec on Dixon who in turn had 3.7sec on Hunter-Reay, and Taku started lapping cars on Lap 23. Rossi and Herta zapped past Spencer Pigot on Lap 26, and Newgarden would be past four laps later.

By Lap 50, Hinchcliffe moved around Bourdais to claim fourth and was now only 1.8sec off the lead as Sato took a while to lap Ed Carpenter, who’d fallen back from the start of the race.

Third-placed Hunter-Reay was the first of the leading runners to pit on Lap 58, and teammate Veach was next to stop, while Sato pitted on Lap 61. But the Japanese driver was way too fast by the time he reached his pitbox, but hitting his front-left tire changer, Chris Welch.

Sato was assessed a stop and go penalty and was already two laps down. Welch was taken to the medical center, checked and released.

The new leader following the stops was Hunter-Reay ahead of Dixon, Hinchcliffe, Rossi, Pagenaud, Herta, Newgarden, Bourdais, Rahal and Veach.

Herta dived into fifth past Pagenaud but now had over three seconds to catch up with Rossi, which he did as Rossi got stuck trying to find a way past Hinchcliffe. Herta moved past for fourth on Lap 112 and took just one lap to pass Hinchcliffe around the outside at Turn 1.

Following the second round of stops, Hinchcliffe was back into third, but Rossi – who’d gotten ahead of Herta in the pitstop exchange – went around the Canadian on Lap 130.

The first caution came out on Lap 136 when seventh-placed Veach smacked the wall exiting Turn 2, broke a right-rear toelink and flattened his tire. He completed a wild 360-degree ride but his race was done.

The restart on Lap 144 was clean with Hunter-Reay, Dixon, Rossi, Herta, Hinchcliffe and Rahal occupying the top six. Hinchcliffe passed Herta for fourth on Lap 155 and while an incident between them came under review, no action was taken.

Dixon passed Hunter-Reay around the outside down the front straight on Lap 165 to take the lead. Hunter-Reay, still struggling to hit a fuel number, let Rossi pass him around the outside on Lap 174, and Rossi took just two more laps to pass Dixon for the lead on Lap 175, but a couple laps later Rossi ceded P1 to Dixon once more.

Hunter-Reay hit pitlane on Lap 179, relying on another yellow otherwise he would have to pit again. Dixon was easing off the pace up front, and Rossi elected to pass him and then pit on Lap 186.

Dixon managed stretch his fuel to Lap 190, leaving Newgarden leading the other cars that had stopped under the earlier caution – Ericsson, Bourdais, Andretti and Power, although the latter two were a lap down. They would all stop by Lap 202, but Newgarden who had been setting personal fastest laps on his alternative strategy, was able to emerge still leading.

Behind Newgarden, Hunter-Reay, Dixon, Rossi, Hinchcliffe, Pagenaud, Herta and Rahal gave earnest chase, while Santino Ferrucci had moved up to ninth ahead of Ericsson and Bourdais.

On Lap 217 of the 248, as Hunter-Reay tried to hang onto Newgarden, he got stuck behind Pigot’s lapped ECR car, and had to concede second place to Dixon.

Three laps later, Hinchcliffe shunted exiting Turn 2, having just gone around the outside of Rossi who hung tough on the inside. Held off line, Hinchcliffe opposite locked but his right-rear clipped the SAFER barrier on the outside before spinning down to the inside.

Hunter-Reay, Power, Conor Daly, Pigot and Carpenter elected to stop. Dixon and Rossi would now have to take on Newgarden who had 10-lap younger tires.

The restart on Lap 227 saw Dixon apparently take the lead but Newgarden stayed firm on the inside line and Dixon had to back off, while Herta went around the outside of Rossi and homed in on Dixon. Down the back straight on Lap 229, Dixon moved down to squeeze Herta onto the apron.

Dipping below the white line, the transition of the banking, the Harding-Steinbrenner machine squirmed out of control and collected Dixon and the pair were eliminated, giving Rossi an urgent sawing steering moment down on the apron in avoidance.

The restart inevitably saw Rossi all over Newgarden, but Newgarden was protecting the inside all the way, as Rahal and Ferrucci burst through to third and fourth respectively.

Following his late stop, Hunter-Reay went up to fifth ahead of Pagenaud, Ericsson and Bourdais, but couldn’t find a way around Ferrucci and came home fifth.

Power and Andretti came home ninth and 10th ahead of Daly in his first race for Carlin-Chevy, with Felix Rosenqvist taking 12th in the second Ganassi car, two laps down.

Newgarden's points lead now stands at 25 points over Rossi, with Pagenaud slipping 48 behind his Penske teammate and Dixon now a full 89 off the lead following his clash with Herta.