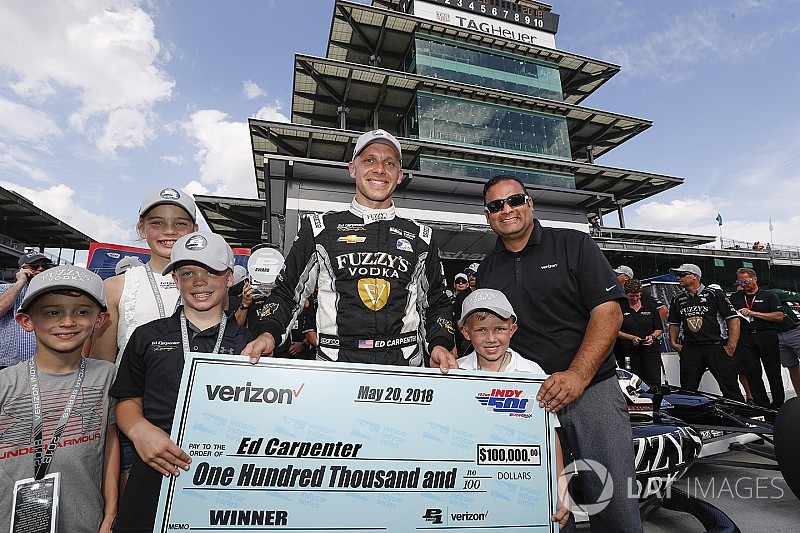 Despite setting Indy 500 pole positions in 2013 and ’14, Ed Carpenter expressed surprise at winning pole for a third time, not only because he turned a 230mph lap but also because he hadn’t been happy with the ECR-Chevrolet on Saturday.

To the roars of the crowd, Carpenter opened his qualifying run with a 230.088mph lap, eclipsing the next best lap – Simon Pagenaud’s first lap in the #22 Penske-Chevy – by almost 1mph.

When he followed it up with three laps over 229, he jumped to P1, with only one car left to run. When Helio Castroneves couldn’t get out of the 228s, pole was Carpenter’s for the third time in six years.

“I’ve just got to thank my team,” said the elated owner-driver. “That first lap blew my mind. I figured we could run a 229 [mph] based on last night. My run last night actually wasn’t very good. The car wasn’t near as good as we’ve been.

“So, I knew had more left but I wasn’t expecting a 230, but the whole ECR team, especially the guys on my #20 car, they’ve put so much love into this car and it means everything to me to put us in a position like this.

“And to be able to share the top nine with Spencer [Pigot], his first time in the top nine with Preferred Freezer, and Danica [Patrick] with GoDaddy, we’re super happy to be here and obviously it couldn’t be possible without Fuzzy’s Vodka. Hopefully we can keep doing this a long time.”

Carpenter admitted that with the new aerokit making it more difficult to pass than in recent years, this pole position was important, “more so than my previous two poles.

“I mean it’s always nice to start up front just because you can control things a little bit. But, unless we all figure out a lot with race setups over the next couple of days, it certainly feels good knowing that I’ve got clean air in front of me, at least as long as I get a good start.

“I’m excited to get back in the car tomorrow and keep working on the race setup to hopefully make it as perfect as this qualifying car was because of all the pole runs I’ve had here, this one, believe it or not, came the easiest.

“The first year I won the pole we led the most laps and really tried to dominate the race. We got shuffled back, made a few mistakes that we learned from as a team and came back better. In '14, we didn't lead as much but were in a really good position and then got caught up in an accident.

“I think you constantly learn from your experiences, especially here. Hopefully we'll be able to close it this year."