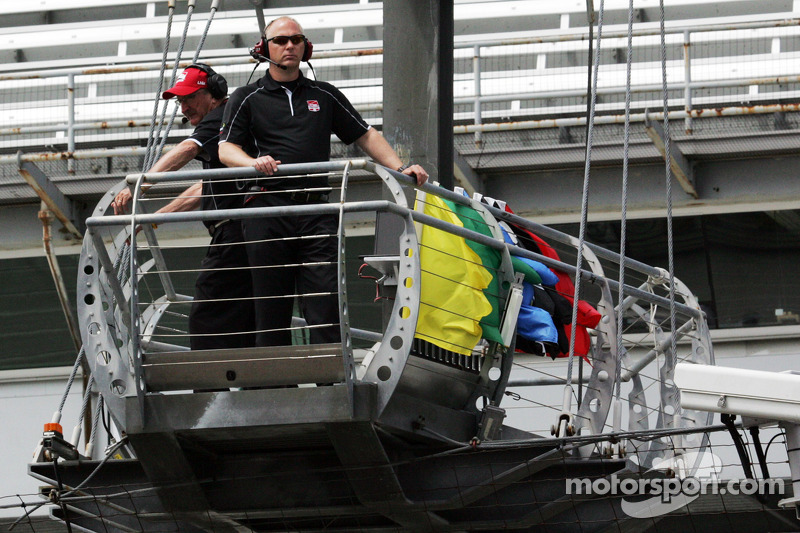 Tom Hansing tells Michael C. Johnson that he's got the 34th best seat in the house at Indy for tomorrow.

May 24, 2014: Speedway, INDIANA - Tom Hansing, one of the starters for the 98th running of the Indianapolis 500, says he has, “the 34th best seat at this year’s 500.” The best 33 seats according to Hansing are in the starting field for the running of the Memorial Day classic.

The flagmen, known as “starters” are high above the 2.5-mile oval in a unique stand that over hangs the 46-foot wide front straight that is surrounded by a cavern of two story grandstands. Hansing, an Evansville, Indiana native, has been with the Verizon IndyCar Series since 2004 and got his start flagging races due to his association with the United States Auto Club. 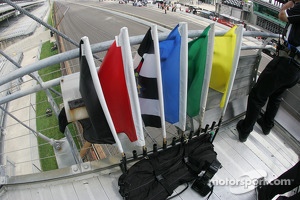 Erected in 2001, the 10,000-pound flag stand is made of heavy structural galvanized steel and stands 30 feet into the air. The starter’s platform is 20 feet 6 inches above the famous yard of bricks at the finish line. This will be Hansing’s sixth Indianapolis 500 in the flag stand for the largest single day sporting event in the world.

Hansing has always been a huge race fan and met the starter for the USAC racing series while officiating a basketball game. His father raced late model cars in the 1970s at Tri-State Speedway in Haubstadt, Indiana and raced near Whitesville, Kentucky on the southern edge of Indiana where NASCAR drivers like Darrell Waltrip and Jeremy Mayfield cut their teeth racing on local short tracks so Hansing has been associated with racing his entire life.

He was first asked to flag a race following a USAC sprint car race. Hansing kept on flagging for free and was eventually asked to flag for other series including the World of Outlaws. “USAC liked what they saw and I was picked,” Hansing said.

When the IndyCar series needed someone to flag with Brian Howard at the Richmond, Virginia race he was offered the chance to move up to the Verizon IndyCar series and, “the rest is history,” according to Hansing.

Hansing’s travel schedule depends on where the USAC and Verizon IndyCar races are located. A few years ago while making the transition to flag all the national USAC division races he was gone almost every weekend, traveling from Ohio to Kansas. His schedule does not allow for him to flag full time at a local speedway but on occasion he is able to flag in Kokomo, Indian on a Sunday night. He does not flag every race on the Verizon IndyCar Series due to travel time and work commitments.

When asked about a protégé that he is training to become a starter, Hansing stated that he was helping the flagman at Haubstadt to learn to flag at larger dirt tracks. Hansing stated, “There is a large difference between flagging a small ‘bull ring’ track of less than a half-mile and the larger mile dirt tracks.” 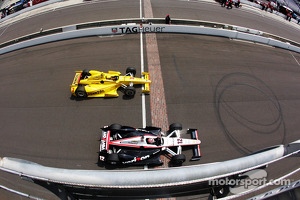 Will Power and Helio Castroneves

Race day at Indianapolis brings over 400,000 people to the famous Brickyard located in the town of Speedway, Indiana. Hansing arrives early before the massive crowd pours into the Speedway and always makes a point to attend the chapel services held at the track since he cannot attend his local church on that morning. It is a big priority for Hansing to attend the service and then afterwards he meets friends and other people that are acquaintances attending the race.

He also meets with race officials from other racing series that are present at the Speedway and he makes sure that he gets to enjoy all the pageantry associated with the “Greatest Spectacle In Racing.” Hansing really enjoys the Parade of Bands that takes place on the track race morning and likes to see, “all the young people and the schools they represent.”

Tom always is asked what happens if he has to go to the bathroom during the race, which can last as long as three and a half hours. “I stop drinking liquids and hour and a half before the race so that does not happen,” he laughed. Once the cars have been placed on the grid race morning, Hansing and Paul Blevin, the head starter for this year’s 500, will make the arduous climb up the flag stand ladder. This is usually about 11:00 a.m., one hour before the posted start time of the race.

Hansing likes to take in all the pre-race traditions and ceremonies associated with the running of the 500. The singing of Back Home Again in Indiana, the playing of Taps, the launch of the balloons and the colors of the massive grandstands are all viewed from a perspective very few people ever get to see. “There is no way to put this vantage point into words,” he stated. “It is a different view to see how fast they are coming at you.”

Mark Cuban, Indiana University graduate and owner of the Dallas Mavericks will be the honorary starter for this year’s race. Hansing said that Cuban is welcome to stay as long as he likes it in the flag stand after the start of the race. Hansing will serve as Blevin’s back up Sunday and as an observer, mainly keeping track of the lap cars and pit stops. Since the starters cannot see the entire massive 2.5-mile speedway, they rely on computers and other observers to help them during the race.

The strangest thing to happen to Hansing while flagging a race occurred in December of 2013 in Fort Wayne, Indiana. While flagging the “Rumble in Fort Wayne” an indoor midget racer became airborne and hit the bottom of the flag stand. The impact threw Hansing up in the air and he came down on the metal rail that supported the stand. The You Tube video of the accident has been viewed over 5,000 times since the accident.

When asked about his most embarrassing moment while flagging a race, Hansing recalled that he dropped the yellow flag at Richmond, Virginia in front of 15,000 people at a Sliver Crown race.

While his interaction with IndyCar drivers is limited due to the time commitment the drivers have with sponsor obligations, Hansing is able to build a rapport with USAC and other series drivers. “I would like for them to be able to approach me if they want to say something or if they would like for me to do something different,” he stated. 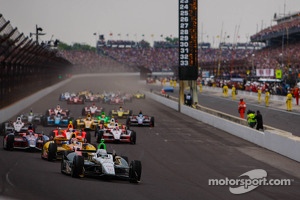 The flags used for the Indianapolis 500 are 25 inches by 25 inches and made of rip stop nylon. If the flag catches on a fence it will rip but not continue to tear. The flags for the 500 are given to Mary Hulman George, chairman of the Indianapolis Motor Speedway, after the race to be auctioned off for charity. The winner signs the flags each year and the double-checked flags are used at the photo shoot of the winner on Monday morning after the race.

The starters also help the track race announcers during practice and race day. “If there is debris on the track we make a motion like we are picking up something,” Hansing said. The starters point to the sky if the yellow flag is due to moisture and have other signals they use during the race to help out the broadcasters who are located directly across from the flag stand for most of the month of May.

After the race, Hansing and Blevin will gather everything in the flag stand and take it to the IndyCar hauler. After completing their duties at the track, Hansing winds down the day with a cookout dinner with friends from his church.

The Indianapolis 500 was recently named the number one item on the “best sports bucket list” by USA Today. “Tell fans,” Hansing stated, “if you get the opportunity to go to Indy, put it on your bucket list. When you drive under that tunnel, you realize where you are. To be able to look down and see the yard of bricks, this is where it all takes place for us. When they give the command to start the engines you get goose bumps on goose bumps.”

Twas the night before Indy