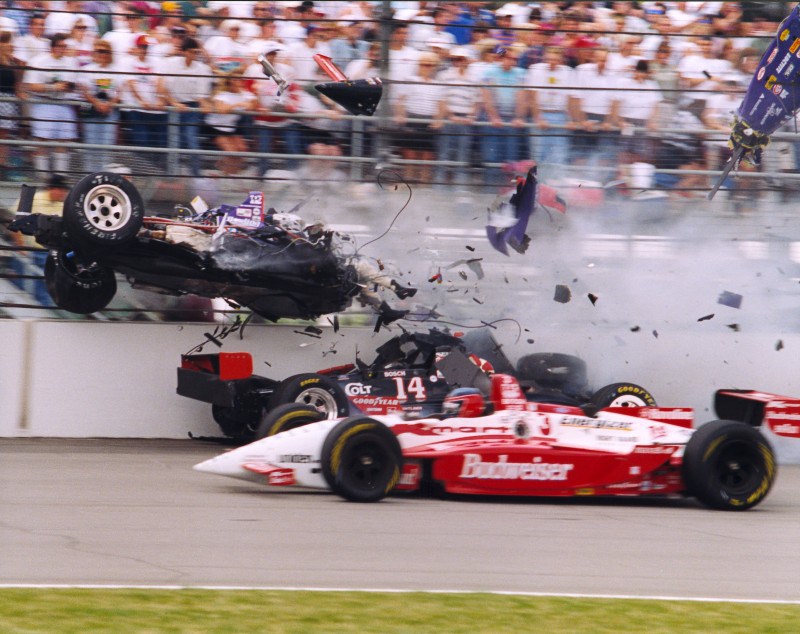 Motorsport.com looks at some of the biggest accidents in the history of the Indy 500.

It is one of the worlds biggest speedways, and has been around for more than 100 years. It was once paved with bricks, and has seen drivers from all over the world kiss those bricks that lie at the start finish line of the Speedway. It allows the cars to turn laps at an incredible, and dangerous pace.

We look at some of the biggest wrecks in the Speedway's history. No drivers were killed in any of the accidents you are about to see.

On the last lap of the 2010 Indy 500, Mike Conway ran over the rear tires of Ryan Hunter-Reay sending him flying into the turn three catch fence. Conway suffered compression fractures to his lower back and fractured vertebra in his neck in the accident. Mike Conway would return to the sport but refused to race on ovals.

Roberto Guerrero lost control coming through turn four on the last lap of the 1996 Indianapolis 500 and collected Alessandro Zampedri and Eliseo Salazar. Zampedri’s car lifted over Salazar’s car, prompting Salazar to duck his head at it flew over

The right rear wheel came off of Jeff Andretti’s car and he slammed into the turn two wall head-on. Andretti suffered a concussion as well as numerous injuries to his feet. He would return in 1993 but would be caught up in a crash with Roberto Guerrero. Gary Bettenhausen was collected in the accident by a wheel that came off of Andretti’s car.

Kevin Cogan got loose coming off of the fourth turn and hit the inside wall before ricocheting to the pit road abutment. After hitting the abutment, his car split into two and came to a stop in pit lane. Remarkably, Cogan walked under his own power to the ambulance.

Journalist turned race car driver Patrick Bedard lost control of his car coming out of turn three and slammed into the inside wall between turns three and four. His car disintegrated and Bedard’s main injury was a cracked jaw.

Danny Ongais had left the pits early in the race when he lost control heading into turn three. He corrected, but that sent his car nearly headfirst into the wall. His car came to a stop in the north short chute, and although he was exposed from the crumpled monocoque, he came back to race again at the Speedway.

In one of the most bizarre starting accidents in Indy 500 history, Kevin Cogan lost control of his car before the green flag came out. Mario Andretti collected him, but could have avoided him if he wouldn’t have been out of line with the second row.

Stan Fox lost control of his car in the first turn, leading to a near head-on collision with the wall, collecting several other cars in the process. Fox’s legs were exposed after the monocoque split in two, and although he never raced again, he did recover from his injuries.

Billy Foster was squeezed into the outside wall, causing a crash that eliminated many contenders from the race. The most serious injury was caused when AJ Foyt climbed the catch fencing and cut his thumb. 11 cars were out.