Tony Kanaan won the 2012 Indianapolis 500 in one of the most popular race wins in recent memory.

Driving the KV Racing Technologies Chevrolet, Kanaan’s week was completely average, never topping the charts in a single session, and found himself on row 4, in the 12 positions for the start of the 98th annual Indianapolis 500.

The race was also known for its speed, as it was completed in 2 hours and 40 minutes, making it the fastest Indy 500 in history, taking the 1990 record set by Arie Luyendyk in 1990.

The race saw a total of five cautions, with the final caution deciding the race. 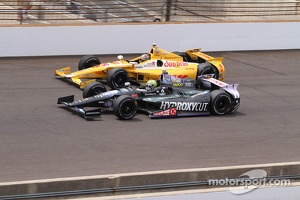 Kanaan spent much of his day rolling around the top ten. Under caution for the fourth time during the race, he was sitting behind race leader Ryan Hunter-Reay as the final green flag flew.

The Brazilian wasted no time, and made his way past Hunter-Reay on the green flag. As the field headed through turn 1, Dario Franchitti found himself in the outside wall bringing out the caution that would eventually end the race.

While race fans worldwide always find a way to bellyache when a race ends under caution, no one was too upset at the outcome, as Kanaan had been attempting to win this race since he started in American open wheel racing in 2002.

"I was looking at the stands, and it was unbelievable ... This is it, man. I made it. Finally they're going to put my ugly face on this trophy,” Kanaan said after taking the popular victory.