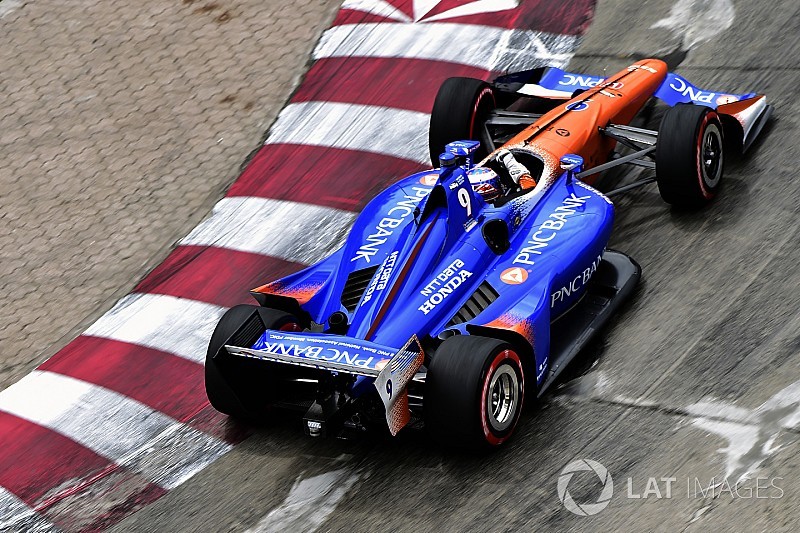 Scott Dixon led the raceday warm-up for Chip Ganassi Racing, beating polesitter Josef Newgarden by over 0.2sec, but Jordan King bounced off the inside curbing at Turn 8 and put his Ed Carpenter Racing-Chevrolet into the wall.

Dixon lapped the 1.786-mile course in 59.1394sec to beat the Penske-Chevrolet  of defending champion and defending Toronto race winner Newgarden by 0.2290sec. Ryan Hunter-Reay and Marco Andretti were third and fourth for Andretti Autosport-Honda, ahead of Graham Rahal in the Rahal Letterman Lanigan Racing-Honda.

Ed Jones was sixth in the second Ganassi car, his best time coming on red tires, while Conor Daly was a highly impressive seventh for Harding Racing. He rolls off 11th today, after an excellent qualifying effort in damp conditions.

Simon Pagenaud and Will Power, the second-row starters, were only ninth and 13th, while Juncos Racing’s Rene Binder had the best showing of his short IndyCar career, going 16th fastest – just 1.3772sec off top time.

King's shunt saw the ECR-Chevy sustain quite heavy but repairable damage to the front-left corner, as he just missed the tire wall and struck concrete.

Tony Kanaan spun his AJ Foyt Racing-Chevy on the final lap of the session and came to rest broadside across the track, thankfully without being collected by those following.