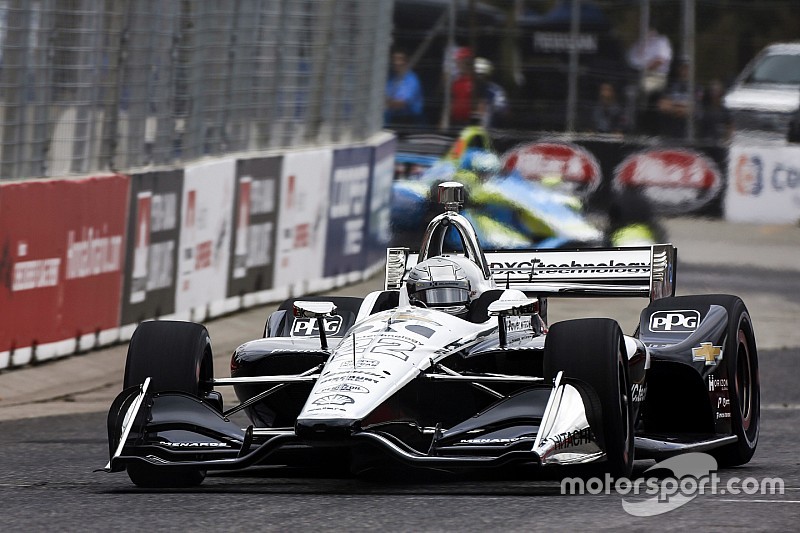 Not for the first time at this track, 2017 Toronto polesitter Pagenaud had a clear edge over his Penske teammates, eclipsing Josef Newgarden and Will Power by over half a second as the drivers got to try Firestone alternate compound tires for the only time before qualifying.

Sebastien Bourdais was barely more than a tenth off top spot, also ducking his Dale Coyne Racing with Vasser-Sullivan Honda under the 1-minute barrier, while Spencer Pigot had a very encouraging run to fourth for Ed Carpenter Racing-Chevy to beat the second Ganassi car of Scott Dixon by one-tenth.

Alex Rossi had a scrappy session, clattering the final turn with rightside rear and front wheels, and then lost five minutes for stopping on track with a bent left-front wheel after scraping it on the wall at the inside of Turn 9.

However Arrow Schmidt Peterson Motorsports’ rookie Marcus Ericsson redefined “incident-packed” session, smacking the final turn (Turn 11) wall with his right-rear, bouncing off the outside wall at Turn 5, visiting an escape road and then having a near miss with another tire barrier. Unsurprisingly, he wound up last, as series returnee Sage Karam drew well within two seconds of Pagenaud’s P1 time as he starts to come to grips with the Carlin-Chevrolet.

“I’m so lucky,” says Wickens as he thanks fans for support