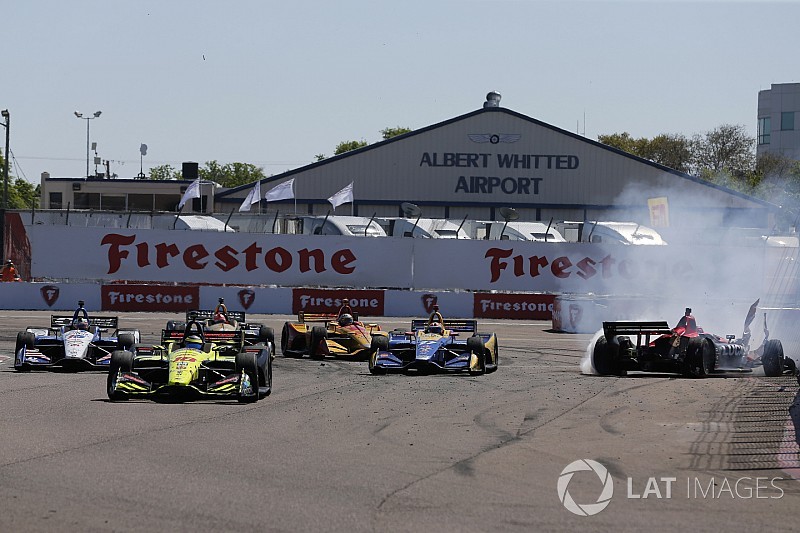 Alexander Rossi has blamed Robert Wickens for the penultimate lap collision at IndyCar’s GP of St. Petersburg, which saw erstwhile leader Wickens spun into the tire wall, and Rossi drop to third place.

On the final restart, Rossi got a strong run on series debutant Wickens and moved to the inside of the Schmidt Peterson entry to make a pass for the lead. However, under hard braking, the rear of the Andretti Autosport swung out to the left, bouncing into Wickens’ car and sending the rookie into the tires at Turn 1.

Said Rossi: “Normally they don’t allow push-to-pass on restarts, you have to do a timed [racing] lap before you get it, but because of the late call to go green, that lap they allowed it and I got the call when I was in the middle of Turn 13/14.

“So I got a big jump on Rob and he got to the push-to-pass pretty late, so the run was perfect for me. Heading down into Turn 1, I knew there wasn’t going to be many other opportunities for me because he’d had a very good car all day and they did a great job.

“So I made the pop [out of the slipstream], he defended the position which he has the right to do but in doing so, by moving in reaction, he put me into the marbles pretty late into the corner. It’s difficult with theses cars with how much we’re sliding around even on the racing line, so on the marbles it’s hairy.

“Super-unfortunate to see that happen – I feel bad because I think I could have won and he could have been second. Nonetheless it was a great job by the team all weekend. I think we showed we had a car that could qualify up front yesterday and we redeemed ourselves a little bit today…”

Asked if he felt Race Control’s “no call” on the clash between himself and Wickens was a vindication of his perspective on the shunt, Rossi replied: “Yeah, they made it very clear in the drivers meeting that the rule on blocking was that you can’t move in reaction.

“If he’d defended the inside initially out of 14 or even halfway down the straight, and I’d still continued to go to the inside, then yeah, that’s my decision to put my car in danger.

“But there’s no reason why I can’t pop and stay next to him. I don’t have to have all four wheels on the part of the track where nobody goes on.”

On the subject of braking, Rossi said he was in control until the door started closing on him. Asked if his goose was cooked as soon as he hit the brake pedal, Rossi replied: “My goose was totally rare until he continued to move in the braking zone and put me more into the marbles. I had no problem pulling it up, I wasn’t locked up or anything.”

Coyne on remarkable Bourdais win: “We didn’t have a top-three car”