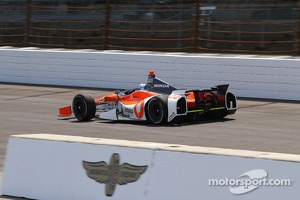 "That was so much faster than a Firestone Indy Lights car!" Vautier said. "It was harder to run slow when they were asking us to stay between the lower speed ranges because it was difficult to judge how much to lift to stay in that segment."

Once Vautier reached the third phase in his No. 55 Schmidt Peterson Motorsports Dallara/Honda/Firestone car, he really started to enjoy himself.

"I managed 15 laps at full speed at the end and loved it!" he said. "Everything happens faster in these cars and you need to anticipate everything. It's easier to make a mistake and you have to be on it all the time."

"It was great to have Arie (Luyendyk) as a coach because he has so much experience here at IMS that you know you can trust what he's saying to you," Vautier said. "It was very good because he was giving me just enough advice and still letting me work with the team. If I have any more questions over the month I'll definitely be asking Arie!"

After completing ROP, Vautier was cleared to join veterans in practice at IMS for the Indianapolis 500. Practice resumes at the Indianapolis Motor Speedway on Sunday, May 12 from 12 - 6 p.m.