Will work as race engineer for second Indy car program.

Most recently Jones spent over 15 years with Team Green/Andretti Autosport as a race engineer in Indy Lights, Champ Car and the IndyCar Series and moved to KV Racing Technology in 2012 to be Formula One veteran Rubens Barrichello’s race engineer.

“Our intention all along was to build our engineering department and Eddie is one of the best out there.” said team co-owner Bobby Rahal. 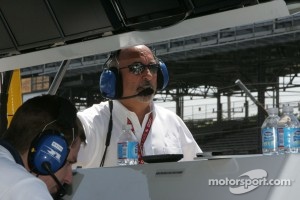 “Given his track record, which is impressive, we are obviously very pleased that he has chosen to join our team.

He will be the race engineer for the second program we expect to have, but in the meantime before we finalize that, Eddie will contribute daily to our overall engineering effort.

I have always been impressed with the way he goes about his business, his personality and his strength as of a team player. His addition is a very important part of our future success.”

Jones began his career in racing as a driver and race mechanic in 1971 and has built an impressive career since then.

He worked on race and championship-winning programs in series such as the MARC Midget Championship and British and European F3 series, and was responsible for wind tunnel testing of Ralt F3 and F3000 cars.

His first experience in the United States was as a competitor in the Formula Super Vee series in 1983 and he moved here in late 1991 when he co-founded Shannon Car Corp. with the sole responsibility for design, production and construction of a prototype Olds Pro Series car for its US debut.

He was a consultant for various Atlantic and FF2000 programs and was team manager and engineer for FRE Racing’s Indy Lights program from 1994-1996.

His 2012 season as F1 driver Barrichello’s engineer at KV Racing Technology produced an eighth place season-ending standing in his rookie year, two top-five finishes and an 11th place in the Indy 500.

“Bobby Rahal has been a winner both as a driver and as a team owner so he fully understands what it takes to be successful at this level and has built a team that is clearly up to the task.

In particular I like the emphasis he places on the importance of engineering and am impressed by the group he has assembled under Technical Director Jay O'Connell and with Race Engineer Gerry Hughes.

I believe my longstanding Indy car experience and particular skill sets will serve to compliment their existing program and assist in the pursuit of greater competitiveness for 2013 and beyond."

Season highlights include a second place finish in Edmonton and third in Brazil with Takuma Sato in addition to being a contender for the team’s second victory in the Indianapolis 500 on the final lap.

Drivers and teams get in final testing of year in Fontana

Will Stewart take up Penske's offer?