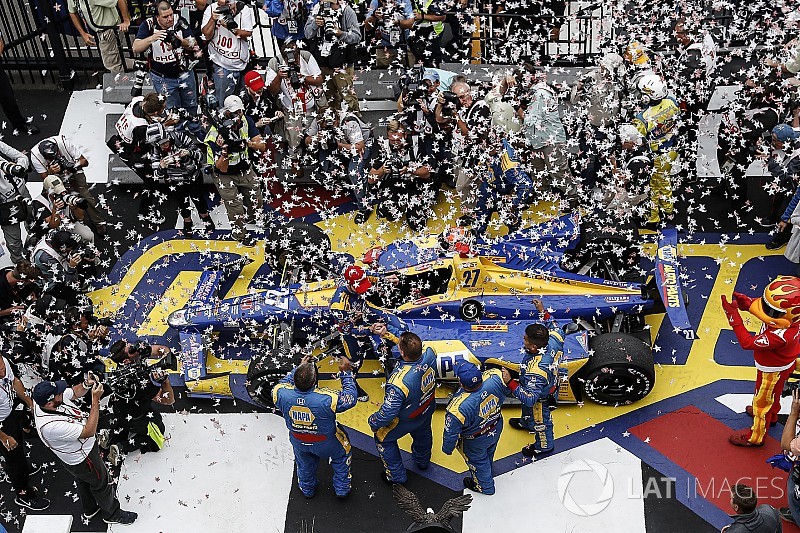 Alexander Rossi, who scored his third victory of the season at Pocono Raceway this afternoon, said the work that rookie teammate Zach Veach performed in testing had given Andretti Autosport-Honda a vital edge for the race.

With bad weather forcing the cancellation of yesterday’s second practice – traditionally the session in which teams work on their race setups after qualifying – teams were left to make educated guesses regarding setups for today’s race.

Rossi moved from third into second, ahead of Josef Newgarden at the first start, while on the restart following the Lap 1 shunt, he surged past the polesitting Penske-Chevrolet of Will Power. In the restart following the huge Lap 6 crash, Rossi pulled away from Power, and while the two-time Pocono winner remained a threat throughout the remainder of the race, Rossi appeared to have a far superior car in traffic, and led 180 of the 200 laps.

“I think the fact that we were able to do that is just a testament to the car I had from Andretti Autosport,” said Rossi, “and really the work that my teammate Zach Veach put in at the test here last week [when Veach was the only Andretti representative, using the extra test day granted to all rookies]. We were able to roll off instantly competitive and strong. Couldn't have done that without him.

“It was a big team win from that standpoint, and a great day for the NAPA Auto Parts Andretti crew, great on pit stops, strategy, gave us the tools we needed to get it done today.”

Asked if he felt there was anything the team had learned from last year’s car, despite a completely different aerokit, Rossi again gave credit to Veach who was the only Andretti driver pre-weekend who had tried the wing extensions and flaps that IndyCar has permitted on superspeedways since Indianapolis.

“I think there's some underlying characteristics that are the same [as 2017],” he said. “If you look at Andretti Autosport over the years, they've been strong on superspeedways regardless of the aerokit. The mechanical package they have works for this type of track. For sure there are some things that translate.

“At the end of the day it was really the finds that Zach found in the test that were big. Those are things we don't usually run on superspeedways, so we didn't have the ability during the month of May. I can't express enough the job he did to give the four of us a car that was as good as it was, as strong as the Penske cars in my mind.

“As a rookie, first time being here, that can't be stressed enough. Huge hats off to him. He'll be on pole and winning races pretty soon.”
Regarding the fact that he has moved to just 29 points behind championship leader Scott Dixon – who finished third today – Rossi commented: “We're trying. We're doing everything we can. We had a stretch that if the pace was there, we just weren't executing on the Sundays. Been able to do that two weekends in a row now, kind of get back to the place we were at the beginning of the year.

“The momentum and the confidence of the whole team is really high right now. We just got to keep qualifying well and having good Sundays, hopefully we can get it done. It's going to be no easy feat by any means. I mean, it's a long way to go still. Scott doesn't finish bad ever, so you’ve got to keep your foot down and your mental focus there, keep trying to repeat performances like this every single weekend.”

Hinchcliffe “took a beating” but thoughts are with Wickens