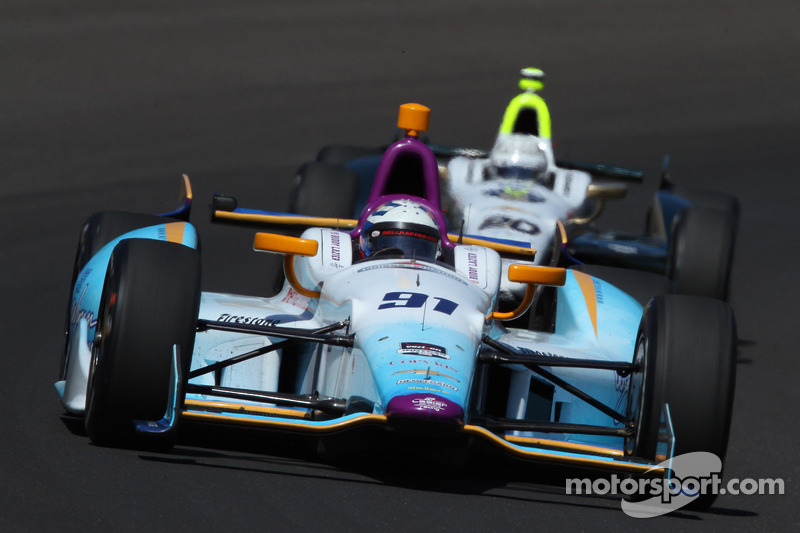 Indianapolis, Ind. – Qualifying for the front-row of the Indianapolis 500 is an immediate attention-getter for fans and the media. Those starting farther back receive less attention, unless you are one of the popular ones. If you end up in row 11, chances are slim that anyone knows your name or even cares. But for 19-year old Sage Karam, Colombian Sebastian Saavedra and former winner Buddy Lazier, they are just glad to be in the race, even though they wish they could have gone faster in the challenging four-lap qualification run. 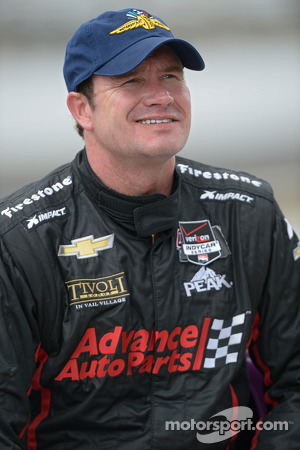 Karam qualified 31st, Saavedra 32nd and Lazier is the anchor man. According to Las Vegas odds-makers, they are 50:1 long shots, but all three of them want to overcome the odds.

For Lazier, 46, he will race in the 500 for the 18th time and in addition to his victory in 1996, he has a pair of second-place finishes to go along with an IndyCar championship in 2000. “Two of us in the last row only started here on Thursday a week ago, so I don’t know what you can expect from us,” Lazier said. “We are within a few miles per hour of the pole winner with one-third of the practice time.”

After being inactive in recent years, many wondered whether Lazier would return, but he wasn’t throwing in the towel. “I did plan on coming back but not as late as we did,” he commented. “I am disappointed about that, but this is a new program that is being built. It didn’t exist until April, 2013, and given the smallness of it, we are having growing pains but we are planning a two or three-year program.

Our investors come from all over the country, but they have one thing in common – they enjoy skiing and the Alpine life-style because we all met at our hotel, the Tivoli Lodge (Vail, Colo.).

“Our partners decided to purchase this race car and present it to me, sort of a ‘Let’s go racing,’ type of thing. But the race car is only a starting point, as you need leased engines, tires, crews and on and on. To run a small program and have success is a good thing.” The Lazier team has seven partners, including one share for (father) Bob and Buddy Lazier.

According to Lazier, the team lacked time to focus on qualifications, so they devoted their attention to race set-up. This attention may have paid off as they were 14th fastest in Friday’s Carb Day runs.

Starting last is frustrating to Lazier but one he can adjust to. “It is frustrating as we know the car is faster,” he said. “We have a good team that is capable of much more than we have shown so far. I do take notice of everyone one around me, and even though you have a plan, it is thrown out the window at the start. You just have to take advantage of every opportunity you can. Good cars can find their way to the front. And I really enjoy this place and the challenge it presents.”

While Lazier takes pride in viewing his winner’s trophy, he gives more attention to the two races that got away from him. “When you have a winning trophy, you don’t think much about it; you did what you needed to do. What haunt’s you are the second places, and my two runner-up’s finishes really haunt me.” 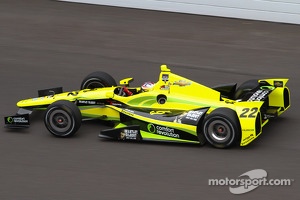 On the inside of row 11 is Karam, who will be in his first-ever Verizon IndyCar Series race. The high-school senior hails from Nazareth, Pa., home-town of the famed Andretti family. On Sunday, he becomes the third youngest driver to start the 500 behind A. J. Foyt IV and Josele Garza.

“This is a dream come true for me; I have wanted to race in the Indianapolis 500 since I was about four years old. I saw my first 500 when I was eight, and I never gave up on my dream, which is why the development deal with Chip Ganassi Racing is such a big deal. My first IndyCar race ever in the Indy 500 is a tall task.”

According to Karam, Dario Franchitti has been guiding him as have teammates Scott Dixon and Tony Kanaan. Karam has raced here in IndyLights, but said the differences in cars and the accompanying speed makes for no comparison. “Everything is so different I had to learn all over again.”

About the start, Karam said, “We should have done better in qualifying, so the biggest challenge is getting to the front and dealing with all the people in the back. You have to pass a lot of cars. I’m not going to try and be a hero on the first lap, so I will keep my cool and start picking them off one by one. Hopefully, I can hook up with (teammate) Ryan Briscoe and race our way to the front.”

Sixteen days after the Indianapolis 500 Karam will graduate from high school, and even though he has missed numerous school functions, he fully intends to be on hand to accept his diploma. Several classmates have traveled to Nazareth to cheer on their classmate.

Sandwiched between the youngest and oldest driver in the race is 23-year old Sebastian Saavedra, who will be starting in his fourth 500 and the second time from the 32nd spot.

“It is rough and funny both to be back there,” said the Colombian, who qualified for the pole in the recent Grand Prix of Indianapolis. “In this sport, you can be on top of the world one day and be below it the next time. As a driver, you have to accept it and realize it is not the first or last time that happens.

You just approach it in a professional way and stay focused. It is a long race, and we knew that qualifying was not our strength after the big crash we had in the Grand Prix. The car wasn’t at its optimal level, but I am happy with the re-built car.

“At the start, you have to have a 360-degree view; you can’t focus on one aspect as there are so many things going on around you. You want to see the cars around you and their wings and the big draft that takes place. You just have to be very active. My team’s co-owner Jimmy Vasser and (coach) Al Unser Jr. have given me a lot of help, which has been beneficial. They make you think a lot.”

Karam, Saavedra and Lazier come from different backgrounds, but they all have one thing in common – to do well in the Indianapolis 500, to guaranty their future success. Also, they want the odds-makers to take notice.