What's next for the 'Dinger?

With his contract with Penske now closed, what is next for A.J. Allmendinger?

Today's early retirement (on Lap 1) of the Indy Dual at Belle Isle, Detroit marks the end of AJ Allmendinger's IndyCar Series contractural commitment with Team Penske for this year.

Where does AJ Allmendinger go after two consecutive first-lap crashes on the narrow road/street course at Belle Isle?

In several ways the last year has been a trial for the privileged young driver, whose father was a German nobleman who moved to the United States in 1981.

Allmendinger was a regular on the NASCAR circuit until a failed drug test pushed him to the sidelines in 2012.

Allmendinger was married to Canadian model Lynne Kushnirenko in January 2007, but the couple began divorce proceedings in 2012 as well. 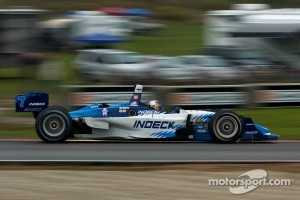 Dinger, as he is known widely in the sport, started his career in karts. He won two International Kart Federation Grand National championships prior to moving to the New Zealand Formula Ford Championship in 2002.

In 2004, Allmendinger and RuSport entered the Champ Car World Series, with Michel Jourdain Jr. as teammate. Dinger scored a run of 6 top-6 finishes towards the end of the season and won the Rookie-of-the-Year award ahead of Justin Wilson. Wilson joined the team fulltime in 2005, and both drivers began regular contention for podium finishes. 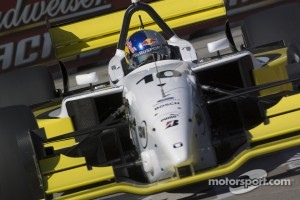 On June, 2006, Forsythe Championship Racing announced Allmendinger as their new driver, replacing Mario Dominguez. In his first race with Forsythe, Allmendinger won the Grand Prix of Portland. Allmendinger became the first American to win a Champ Car World Series event since Ryan Hunter-Reay won at The Milwaukee Mile in 2004.

Allmendinger left Champ Car to accept a lucrative offer from the NASCAR operation Team Red Bull and to help develop the company's version of the "Car of Tomorrow".

On October 29, 2009, Allmendinger was arrested for drunk driving by Mooresville, North Carolina police. He registered a .08 blood alcohol level according to a police report. NASCAR placed him on probation for the rest of the 2009 season. In July 24, 2012 it was announced by NASCAR that Allmendinger was suspended indefinitely after testing positive for a banned stimulant, which was eventually revealed to be amphetamines. 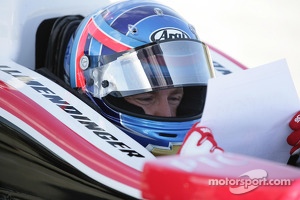 Roger Penske gave Allmendinger a second chance opportunity in the IndyCar Series, even thought the driver was rehabilitated and reinstated by NASCAR, and was eligible to drive in the series.

Dinger's IndyCar experience was less stellar than many expected: he recorded back-of-the-pack finishes at Barber Motorsports Park and at the Long Beach Grand Prix, followed by a seventh place result at Indianapolis. Then came the twin first-lap results at Detroit. 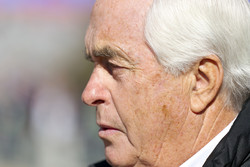 Sources say that Dinger is scheduled for several NASCAR starts this season for Penske, specializing in road and street courses in the tin-tops. Based on his poor showing at Detroit, one has to wonder how successful the driver will be in the heavier, plodding stock cars than in the fleet IndyCar equipment.

All of which begs the question: is AJ Allmindinger ready to return to full-time, big-time professional racing competition or not?

The results so far are mixed, and not particularly impressive.