When Ed Carpenter decided to form his own team, he surrounded himself with those he knew could handled the job, and last year we saw the positive outcome - now to slay Goliath again!

Few things resound with the average fan more than a story of redemption, of triumph over adversity or conquest of the behemoth by the underdog.

You can make a good case for David vs. Goliath as the world's first well-promoted heavyweight title fight, though the participants were of disparate weight classes and substantial physical disproportion.

There's a saying in Washington DC when some news event of local significance occurs that is lesser or even non-interest to the broader interests of the country and the world at large: "Inside the Beltway".

One might characterize the rush to the Indianapolis 500 pole on Saturday at 228.762 mph by local Indianapolis race car driver Ed Carpenter as one of those "Inside the Beltway" happenings, but for the fact the Greatest Spectacle in Racing is far from a parochial buggy race. And as a big win for the underdog, but for the fact that Carpenter has been pointing toward this day for some time now.

"Easy Eddie", as he's known among acquaintances for his polite and reserved demeanor, has been building a reputation as the slayer of dragons for several years. Carpenter won at Kentucky Speedway in 2011 by nipping three-time Indy 500 winner Dario Franchitti at the line by less than one hundredth of a second margin, and he did it in until-then Sarah Fishing Racing's winless single car effort for the season.

Carpenter did it again in 2012, when he passed Franchitti on the final lap to take the win at Fontana Speedway in California on September 15th. This time Ed Carpenter had all of the resources and good confidence of his own single-car team to rely on for back-up. 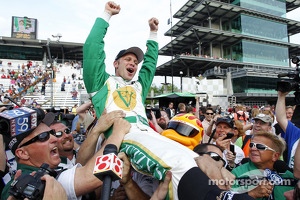 The headline always reads like this: littlest kid on the team belts the home run that beats the Yankees. And true to form, Carpenter's ride around the Brickyard is just as remarkable a story given the money and talent that traditionally top teams like Team Penske and Ganassi Racing have brought to bear on the sport of open-wheel racing; leaving no stone unturned as if to bury the competition in data, parts and secrets as well as speed.

Carpenter is the local kid who has done his hometown of Indianapolis proud. He grew up only blocks from the Indianapolis Motor Speedway and could hear the engines of cars circulating the 2.5 mile oval from his backyard playground at home as a child. He attended Park Tudor preparatory school in locally hip Broad Ripple neighborhood, and graduated with a degree from another sports giant-slayer: Butler University.

"It's pretty amazing to be a single-car team fighting it out with the Penske and Andretti guys," said Carpenter of his extended day-long wait to see if his time would help up against the bigger boys on the block, which of course it did. The subsequent victory celebration found Carpenter on the shoulders of his hometown crew being carried off the tarmac of the old Brickyard to the pole-sitters' press conference.

When the day was complete, and the hometown Indiana Pacers had successfully put away the New York Knicks in the NBA quarterfinals, Carpenter was ready to celebrate on all fronts.

"To sit on the pole for this race is really a dream come true," he said, "and I hope it is a start to what has already been a great month of May. The car has been great and I can't thank my team enough. The sponsors, a lot of great people helped us get here. This is just the first part of what we are here to do."

No small number of veterans around the Speedway see Carpenter's triumph as a momentous rebirth of the grass-roots racing adventure celebrated at Indianapolis in the post-war years. In that decade-long period of arch self-reliance a driver was often his owner, and engineer, and the crew often family and friends and neighbors assembled at the last minute for an assault on the world's greatest race.

"That's an accomplishment in itself," Carpenter said of the feat. "For this team to put in the hard work to give me what I needed to put it on the pole is great. I think a whole lot of prayers went into this day."

Expect the unexpected when it comes to Indy.

Not playing by the rules at Indianapolis can be costly