Why does the Indy 500 winner drink milk? A tradition explained

The race-winner drinking milk – or drenching himself in it – is one of the many iconic images from the Indianapolis 500, but how did the tradition start?

The 24th Indy 500, held in 1936, was the first to feature the Borg-Warner Trophy as the award for the winner, and the first time the winner was given the official pace car. But it’s what winner Louis Meyer did immediately after the race that initiated the most unusual of traditions.

Meyer, born in Manhattan, raised in Los Angeles, had already won the race twice when he pulled his Miller into Indianapolis Motor Speedway’s Victory Lane after more than four-and-a-half hours at the wheel on a warm day in May. Having been brought up believing in the nourishing and refreshing qualities of buttermilk, that’s what the fatigued Meyer requested and swigged after becoming the Indy 500’s first three-time winner.

An opportunistic marketing man in the dairy industry saw the footage of the post-race celebration, unaware that it had in fact been buttermilk that Meyer was chugging, and made inquiries into having Indy winners drink milk from there on.

The notion seemed short-lived, for when racing resumed after World War II, the next three-time winner Wilbur Shaw, now president of the track, gave water to the winner, but when Shaw died in a plane crash in 1954, the idea of milk-drinking was revived. The American Dairy Industry then decided to offer $400 to the winner and $50 to his chief mechanic, provided the driver was shown drinking milk in Victory Lane. That was quite an incentive.

The Speedway’s legendary historian Donald Davidson wrote: “As luck would have it, 1956 winner Pat Flaherty suffered from a slight calcium deficiency and regularly drank milk. In addition to a healthy swig of water from the Shaw cup, he consumed an entire bottle of milk and then asked for a second. The water in the Shaw cup was still offered for a couple more years until finally being retired in favor of milk only.”

And so it became tradition. There was a hiccup in 1993 when Emerson Fittipaldi, after his second Indy win, pushed away the proffered bottle of milk and chose to drink orange juice, explaining to the track commentator that he was promoting the Brazilian citrus drink industry, in which he was involved.

Of course, messing with tradition does not go down well with motorsport fans, and Emmo was jeered by the crowd. Rumor has it that his team owner Roger Penske did persuade him to take a sip of the milk, but by then the damage was done, and to this day there are Speedway devotees who hold the episode against Fittipaldi. One even told this writer that he’d put a curse on the Brazilian great, which is what caused him to crash while leading in the closing stages the following year!

Fittipaldi realized his PR blunder and the money that the winner receives from the American Dairy Association was then donated to a charity. It’s safe to say, a lesson was learned, and it’s not a mistake any winner will make again.

These days every driver who participates in the race is asked by the Association beforehand which milk they wish to drink should they make that special trip and it is pre-arranged. Not even the lactose intolerant would spurn the churn if it meant they got the chance to wear the BorgWarner wreath and hold aloft one of those iconic milk bottles. 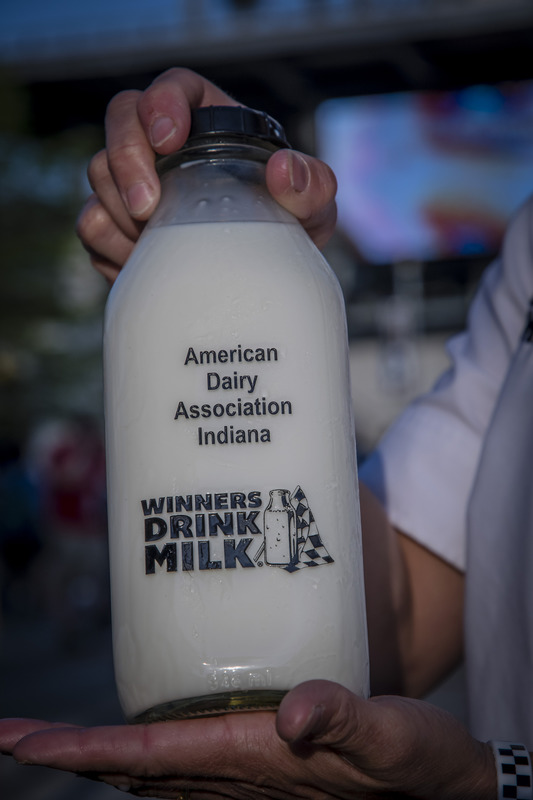