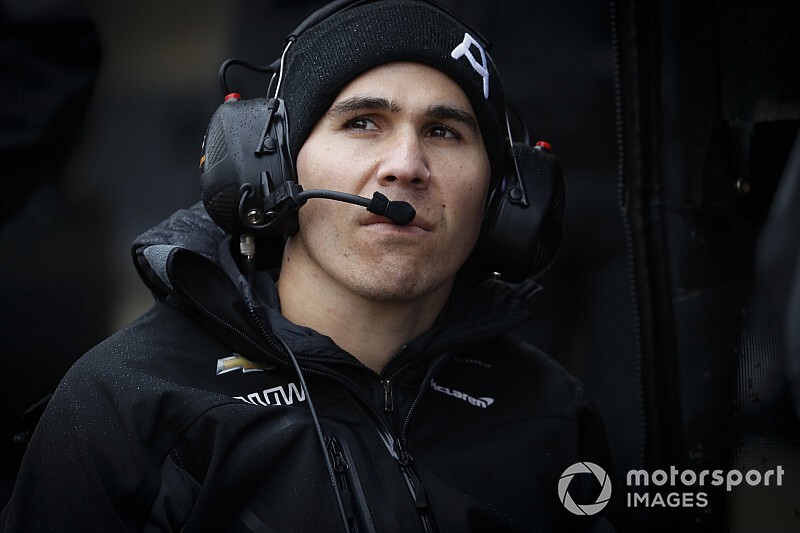 Robert Wickens serves as the driver coach at Arrow McLaren SP-Chevrolet, and says the team’s hiring of Patricio O’Ward and Oliver Askew has produced an a line-up that couldn’t be more different. David Malsher-Lopez reports.

Until his career-halting shunt at Pocono Raceway in 2018, Robert Wickens had been arguably the most convincing rookie in an Indy car for almost 20 years. In 14 starts, he scored a pole on his series debut in treacherous wet/dry conditions at St. Petersburg, had racked up four podiums and three other top-five finishes and was lying sixth in the championship.

So if you wanted to employ the best possible driver advisor for a line-up that consists of one racer with just seven IndyCar starts under his belt and another absolute rookie, then Wickens is surely the ideal person for the role. And that is precisely what Arrow McLaren SP has done. Still very much part of the team that brought him into the NTT IndyCar Series, it will be task of the 31-year-old to elicit the absolute best from Patricio O’Ward and Oliver Askew across the season.

He’s not having to turn water into wine, mind you: the ingredients for success are all there. O’Ward, who is just 20, was the 2018 Indy Lights champion, and proved in his handful of IndyCar starts that he has the raw pace and fighting instinct to succeed at this level. Askew claimed last year’s Indy Lights title, and has a very wise head on his 23-year-old shoulders, knowing when to fight, when to go flat-out and how to succeed on all types of track.

“This role in my life is still pretty new for me and I’m still trying to learn as I go,” Wickens tells Motorsport.com, “but I think it’s going to be interesting and exciting season for Arrow McLaren SP. 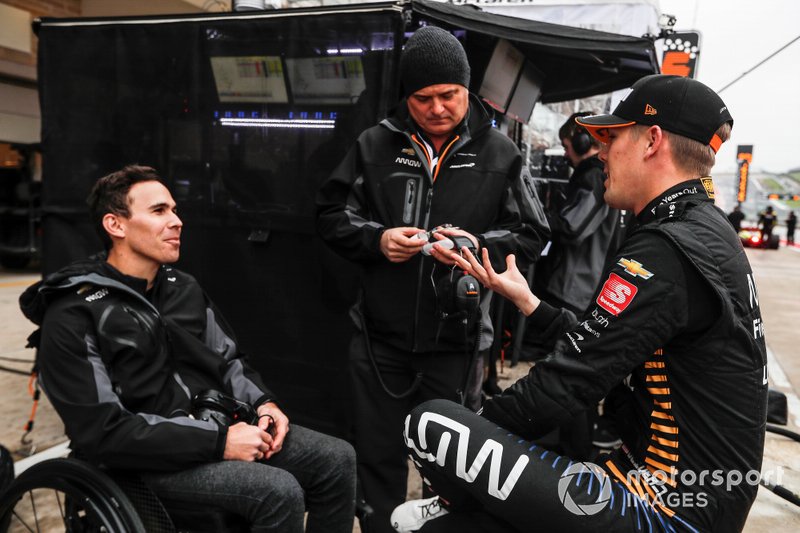 “We have two drivers who could not be more different from each other! Pato is a ‘fly by the seat of his pants’ kind of driver, very naturally talented, who can just wring a car’s neck for all it’s worth. Then we have Oliver who is also naturally gifted but who is a lot more analytical in his approach. And I admit I can see a bit of myself in both guys’ approaches, so it’s been interesting to try and get the most out of each of them.

“But I think them being so severely opposite is going to be great for our team, because eventually we’re going to find that common ground between both of them, and if we can instill a bit of Pato’s style in Oliver and Oliver’s style in Pato, then we’re going to be a real force to be reckoned with.

“Pato is pushing the boundaries, trying to learn the car, and some drivers do that like Gilles Villeneuve and Jacques Villeneuve – until they have an incident, they don’t know where the absolute limit is. The more calculated drivers like Oliver take it a step at a time, approach the limit a bit more cautiously. And what we’ve seen is exactly what you’d expect: I don’t think Oliver has put a wheel wrong in testing, barely even locking wheels, and learning the car on his own terms and in his own way.

“But once we get into first practice at St. Pete, he’ll know it’s crunch time, he’ll be confident and he’ll step up. Having Pato as his teammate is very strong for Oliver, because Pato can go out and get on pace right away and drives his ass off every lap, so Oliver will always have that data there showing what the car’s capable of.

“The opposite is true too: Oliver’s a very quick driver and Pato can see the little detail work that his teammate puts in, pick up on that, and make himself a stronger driver.”

Askew told Motorsport.com in the last Arrow column that he expects race pace and keeping his tires healthy throughout a stint will be two of his strengths. Wickens agrees, and says those are precisely the kinds of areas where O’Ward can learn from Askew.

“Yeah, Pato’s driving style requires a lot of rear tire,” says Wickens, “and keeping the rears underneath him for a whole stint has been a bit challenging. But the irony is that if you look at average time over a stint, they’re both very competitive and pretty much on par with each other. Oliver may have a little less pace at the start of a run but remains at a constant pace throughout, whereas Pato is a bit faster out of the box but more ragged and suffers a little more tire degradation. 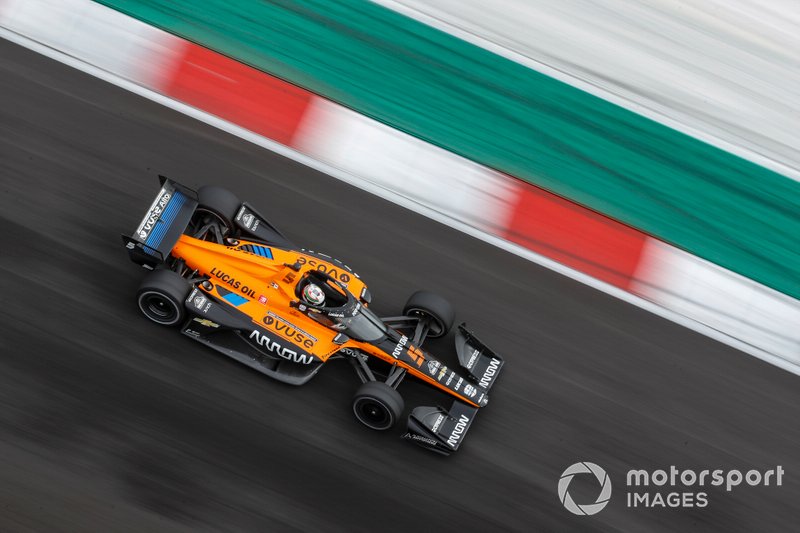 “So, similar to their one-lap pace, if they find that common ground in the middle between their two styles for raceday, they’re going to be very impressive.”

Wickens suspects, however, that their biggest challenge will be fuel-saving – the ability to carry a lot of speed into corners off-throttle in order to eke out their fuel consumption and go a lap or two longer than their opponents.

“That was the toughest part of my rookie year – learning how to be quick and competitive while also saving fuel,” he recalls. “They’ve never had to do that before, but every time they get into a long run they’ve been getting better and better, and actually they’re better at lift-and-coast than I was. We’ve made that a real priority.

“Technically speaking, we’ve also done a good job – through McLaren and the greater depth in our engineering department now – of having better baseline setups at the start of tests and hopefully every race weekend. When we’re rolling off the truck with cars that are closer to ideal then we can really just focus on driver comfort once we hit the track. That was the target at the last test [at Sebring]: to base it around the structure of a typical race weekend, with practice, qualifying sims, and then long runs. That worked out well and each of them turned over 100 laps.”

One of Wickens’ most startling qualities as a rookie was providing feedback to the team’s engineers. He now considers that one of his vital roles as driver advisor is to teach O’Ward and Askew to do the same with their race engineers, respectively Will Anderson and Blair Perschbacher. Consequently, he’s watched and listened intently as the newbies deliver their car evaluations.

Wickens chuckles: “With both of them being so new to this level of the sport, the problem has been that the car always feels great to them! They just love driving it. Obviously that’s a nice little confidence boost to the engineers but when you’re going up against drivers with huge experience like [Scott] Dixon and [Will] Power, and in a field so close, our guys are going to need to find those last fractions of a second. Often those differences aren’t in the driver, they’re in the car, but when you’re lacking in experience you might not know what to ask for from the engineer.

“So I’ve emphasized to them that no racecar is ever perfect, and no racecar should ever be comfortable: if it is, then you’re not going fast enough or the car hasn’t been optimized. Unfortunately, the cold and rain at the COTA test was not particularly kind to our rookies, keeping them to such limited running. We had really wanted to turn a lot of laps at that track because there’s so much high-speed turning there, and we wanted them to get more confidence. 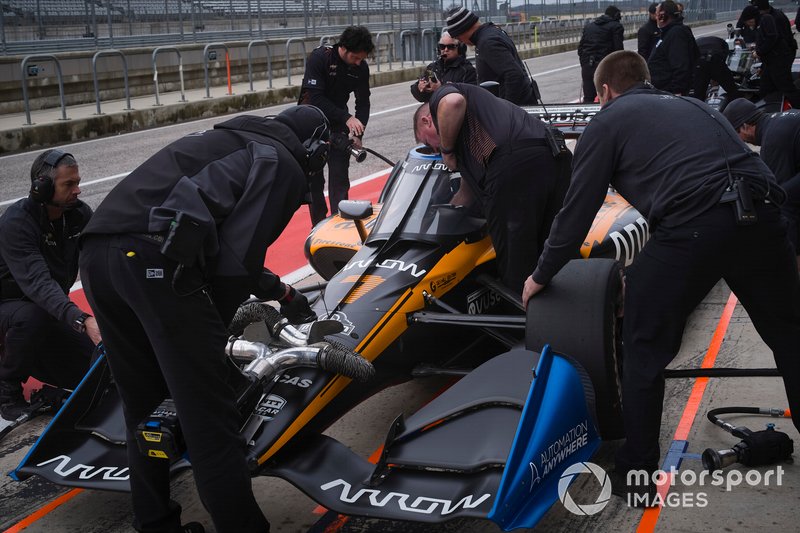 Knowing what changes to ask for in order to optimize the car is one of the areas where only experience – and Wickens – can help.

“But to answer your question, I think their feedback is pretty decent. Pato, with his little bit of experience of IndyCar races – from Super Formula – of driving a very high-downforce car, has quite a bit more understanding of how to wring the neck of an IndyCar and so he knows what he wants from the car in order to deliver a good lap time. But Oliver is very analytical in his debriefs and a lot more technical in what he’s saying about the car.

“So two different approaches, but actually we’ve ended tests with very similar racecars and similar laptimes, so moving forward, it’s great that we can do similar things to both cars and know it’s going to benefit both drivers.”

As a driver – and one with a reputation for pushing his team hard in debriefs – you might expect Wickens to back up Askew and O’Ward, perhaps encouraging them to be more demanding of their engineers and crew. But in fact he sees his role as far less partisan, so will also look at issues from the engineer perspective and try to tease more insight from the drivers.

“I’m a mediator,” he says, “so often I’ll side with the engineers, but other times I’ll side with the drivers: each instance can be different from the last. You’re right, one of my best attributes as a driver was to communicate with the engineer and convey to him what I wanted from the car to be quicker, and dictate it in such a manner that it was very easy for him to understand. A lot of engineers haven’t driven a racecar so when the driver is explaining the car’s handling, it just doesn’t click for them.

“So now, being on the timing stand, if either of our drivers say something about the car and I feel that the engineer’s not really getting it because he keeps treading the same ground in his questioning, I’ll jump in and ask the driver a very specific question that pinpoints what he’s saying and translates it more clearly for the engineer.” 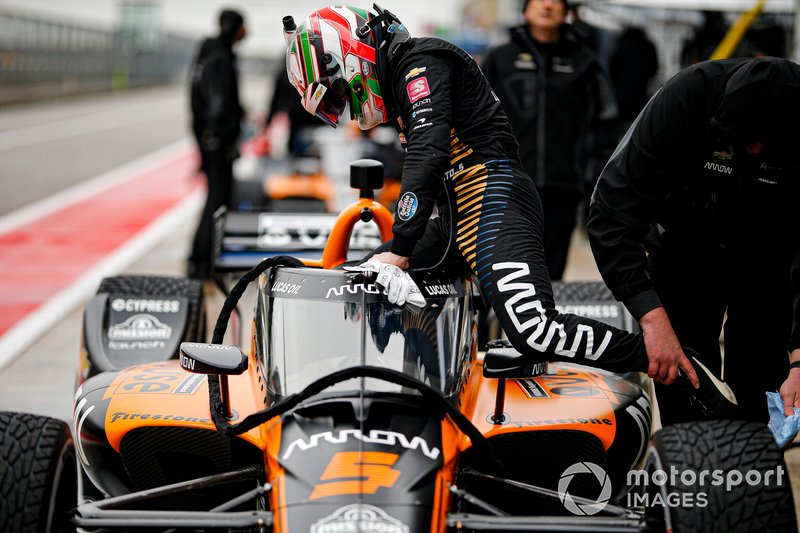 O'Ward will never give less than his all, from first to last lap but can still learn from Askew.

For the team that was formerly Arrow Schmidt Peterson Motorsports, joining forces with McLaren in the off-season to become Arrow McLaren SP is expected to have technical benefits, but Wickens says they may not be immediately apparent from outside the team. Instead, they will – indeed, already have – become helpful away from the racetrack.

“I feel just the presence of a brand such as McLaren coming on board will up everyone’s game a little,” he comments. “But what they bring technically is not going to produce an ‘instant’ performance advantage. They’re still learning about the IndyCar Series, so I think their influence won’t be seen on a large scale until 2021, once they have a strong database. At the moment, we’ll be working with McLaren more to improve simulation, preparation and post-race analysis.”

The coronavirus COVID-19 pandemic and subsequent canceled races mean we may all have to wait a couple of months to see Arrow McLaren SP’s bright young drivers, crew members and engineers being able to display the progress they’ve made in the offseason. But when the 2020 NTT IndyCar Series season finally gets underway, you can be sure Robert Wickens will be giving his utmost to push the team to success. He is a born winner.