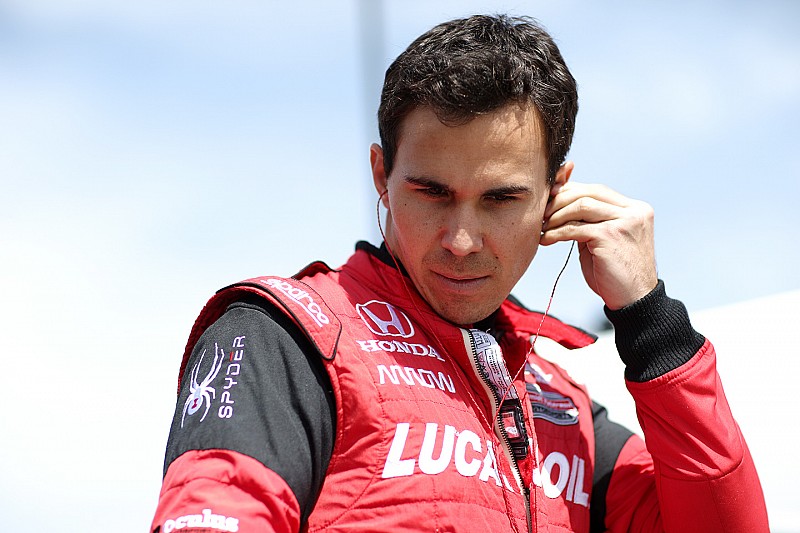 DTM ace Robert Wickens said a tweet he sent this afternoon was not an indication that he’d done a deal for the Schmidt Peterson Motorsports #7 car, but that he’d be very interested in making his IndyCar race debut for the by year’s end.

Wickens then filled in for Hinchcliffe’s then teammate Mikhail Aleshin on the first day of practice at Road America, as the Russian encountered visa issues following his Le Mans 24 Hour outing, and was also on hand in Toronto, a race where Aleshin was ‘rested.’ In the end, the ride went to Sebastian Saavedra, before Aleshin returned at Mid-Ohio.

However, with Aleshin having stood down for the remaining IndyCar rounds of the 2017 season – Pocono, Gateway, Watkins Glen and Sonoma – speculation is now rife regarding who will replace him.

Saavedra, who performed impressively at Toronto, is one obvious candidate, while another is Oriol Servia who has been testing the Honda-powered 2018-spec Indy car which is run by SPM. Pipo Derani also made a bid for the ride.

However, Wickens triggered speculation on Tuesday with a tweet that read: “I’ve never been to Watkins Glen or Sonoma… But I hear they’re really nice…”

As he packed his bags for DTM’s round at Zandvoort this weekend, he told Motorsport.com: “To be honest it was just a social media thing to stir the pot a bit!

“But to be honest I’m very interested in IndyCar. I was interested in Sebring after the seat-swap that Hinch and I did. Then getting teased a little bit at Road America but not being able to do the race has left me eager to see what IndyCar would be like for a full weekend.

“So once I heard that Mikhail wasn’t racing for the rest of the year, I immediately checked my calendar to see what dates clashed, and I’m available for the last two road course races. And if I was contacted, I’d be 100 percent interested.

“The team and I have stayed in contact since the seat swap, which is how the Road America chance came up, and they also contacted me for Toronto – where I would have been available. I was home for the weekend.

“So, I think I’ve been pretty vocal and clear that I’m very interested in IndyCar – at the very minimum, doing a couple of one-off races. Now with Mercedes pulling out of DTM at the end of 2018, that definitely got me thinking.

“Sebring and Road America were fun and done just out of a passion for driving racecars, and knowing I had something great to go back to – my DTM ride. Now circumstances have changed and I’m looking at what’s out there.”

Wickens said that with teams having to start over with the new universal aerokit next year, 2018 would offer a rookie a good chance to make a strong impression.

He said: “It’s definitely a great time to jump in with a new aero package. Having said that, the tires, from what I understand, are going to be pretty similar and from the driving standpoint, learning the tire behavior is the thing that takes longest. So I think the drivers and teams who are quick in 2017 will still be quick in 2018.

“But yeah, any time a rookie driver can level the playing field, it’s optimum. It would be a pretty good time to leap in.”

Wickens said that Mercedes-Benz has always been open to him gaining racing experience in other series, providing it’s not a deal where he’s racing for a rival manufacturer against Mercedes entries, so driving one-offs in a Honda-powered SPM car wouldn’t be an issue.

“Yeah, they’ve been great like that,” he commented. “Obviously I couldn’t race for another manufacturer in IMSA’s GT Daytona class or the Pirelli World Challenge because there is a strong Mercedes-Benz involvement there. But when I raced in Prototype Challenge class this year at Daytona, they were really eager – they even offered to make any phone calls that would help make the deal happen. Mercedes are eager for their drivers to get seat time in anything.

“And to be clear, if Mercedes want to continue with me in DTM in 2018, that’s still a great opportunity. I’ve really been enjoying my time with the team and in the series.

“But to cut a long story short – that tweet this afternoon was heartfelt but meant as a bit of fun. If I’m contacted by Schmidt Peterson about running those races, I’ll take it seriously and be very eager to do them.

“I don’t have any money, so if they need money, I’ll be watching from the sidelines. But if they can afford to take someone without money, I want to be on their list.”

Bourdais given all-clear by doctors after Indy 500 crash