Will Power takes Team Penske to another win at Barber

BIRMINGHAM, Ala.(April 1, 2012) – Utilizing a timely strategy and the fastest car on the track, Will Power drove from ninth to victory on Sunday as Team Penske continued its dominance at the Honda Indy Grand Prix of Alabama.

The pit stops were fantastic. Without these guys, there’s no way I would have won today.

The No. 12 Verizon Team Penske car won for the second consecutive year at Barber Motorsports Park as Power outpaced second-place finisher Scott Dixon by 3.3709 seconds in his Dallara/Honda. Team Penske teammate and 2010 Grand Prix of Alabama winner, Castroneves, finished third in the No. 3 AAA Insurance Dallara/Chevy while Ryan Briscoe came home 14th in the No. 2 Hitachi Team Penske machine.

On his way to becoming the first two-time winner at Barber, Power pitted shortly before a yellow flag surprised several of the leaders late in the race. He pulled away from Dixon on the race restart and never looked back as he drove to his 16th victory in 89 career IndyCar races. The result was especially satisfying for Power who started ninth on Sunday after his fast lap in qualifying was disallowed due to a caution flag and he was unable to reach the Firestone Fast Six.

“The entire Verizon Team Penske crew were on the money today,” said Power, who improved to third in the series standings with Sunday’s result. “The pit stops were fantastic. Without these guys, there’s no way I would have won today. They got me out quickly, and they got me out ahead of the field.”

While Power went back-to-back in Birmingham, Castroneves continued his pursuit of the IZOD IndyCar Series crown with his second consecutive podium finish to start 2012 as he led 28 of the 90 laps in the race after he started from the pole.

“I’m thinking about the big picture and what it all means,” said Castroneves, who ranks first in the standings with 86 points. “I could have had those two spots and the extra points, but I’m happy with what we got. It was a great effort by the AAA team. It was very difficult, but (race strategist) John (Erickson) did a great job with the strategy. Now I’m just thinking about taking it one race at a time.”

Briscoe, who started 12th, moved up midway through the race before he got caught up in traffic and he struggled to get his Hitachi Team Penske Dallara/Chevrolet where it needed to be to advance through the field.

“We had a tough day out there today in the Hitachi car. We were gaining track position over the middle stint of the race but then we had some tire issues and it cost us position,” said Briscoe. “It’s great to see two Team Penske drivers on the podium and good job by Will (Power) to get the win. It’s not the finish we were hoping for in our first race with Hitachi on board but I’m excited to get to Long Beach and go for the win there.” 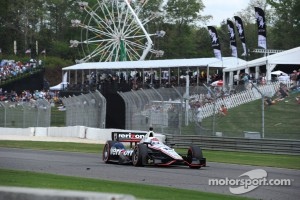 Power has now won six of the last 10 IndyCar road and street course races and he trails Dixon by just seven points for second in the standings, with 77 points earned over the first two races. Power credited the Firestone Firehawk tires on his car for helping to put him in that position.

“Firestone got it dead on with the tires this week. The discrepancy allowed for passing, which is what gave us a chance,” said Power, the series runner-up in each of the last two seasons. “Plus the pit stops were unbelievable. They got me out front. When you have Tim Cindric on your radio, you’ve got a great advantage. He was awesome. He put me in great positions throughout the race and made my job a lot easier.”