Chevrolet will evaluate the idea of supplying engines for the 2015 Indy Lights Series.

Andersen Promotions has been busy since INDYCAR handed over the promotion, licensing and operation of the Indy Lights starting with the 2014 season. A new chassis is in the works for 2015 with upgrades to the current Dallara in the plans for next year.

With the addition of the Indy Lights on top of their “Mazda Road to Indy” program with the Pro Mazda Championship and the USF2000 Championship, many expected that the Indy Lights engine would be Mazda but news broke today from RACER.com' Marshall Pruett that Chevrolet is considering the possibility of supplying the engines. 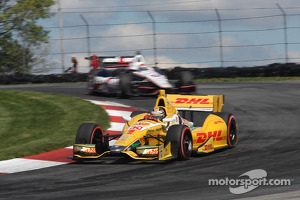 Chevrolet returned as an engine manufacturer to the IndyCar Series, and now they plan to evaluate the idea of supplying engines for the Indy Lights in 2015.

At the recent INDYCAR weekend at Mid-Ohio, Kent admitted that GM had considered the idea of being involved with the Indy Lights program, according to the Racer.com report.

“Really, the interest from Chevrolet being in Indy Lights would be an opportunity to potentially demonstrate a different technology, where there would be an opportunity to demonstrate our EcoTech four-cylinder turbo, for example," he explained. "So we need to sit down with IndyCar and understand the direction they're going and if there's a fit,” Kent informed Pruett.

What other engine manufacturers may yet step forward? No doubt Cotman and Andersen have approached Honda also, considering they are one of the two IndyCar series engine suppliers. Would Ford, Toyota, or Chrysler consider the possibility supplying the powerplants for the future?

And will Mazda remain a major player with the two other series that are considered not only a stepping stone for Indy Lights but also for IndyCar, is yet to be seen.

Kirkwood now available to any team as he seeks fulltime ride