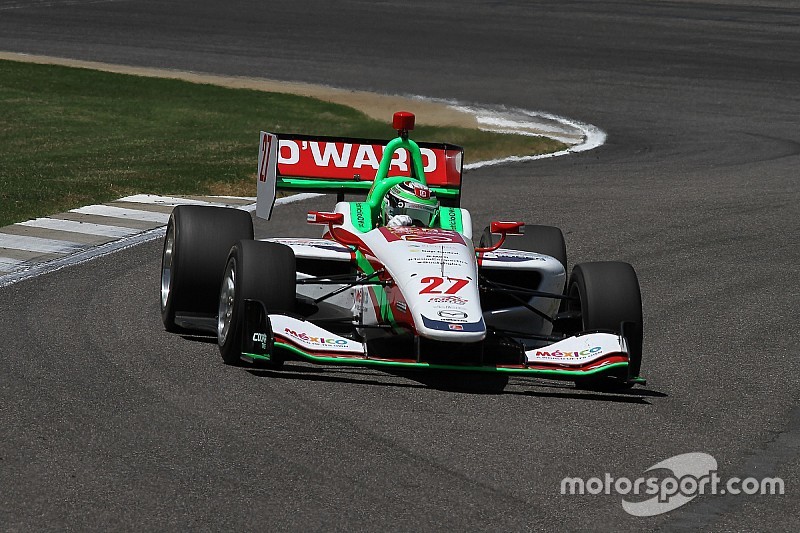 Pato O’Ward put on a clinic at Barber Motorsports Park to notch up his second and third wins of the season, while Parker Thompson and Harrison Scott earned Pro Mazda glory.

In the dry on Saturday, Andretti Autosport’s Pato O’Ward fought a great battle with teammate Colton Herta, but in the wet on Sunday, the Mexican was in a class of his own.

At the start of the dry race, polesitter Herta held off O’Ward through Turns 1, 2 and 3, with Santi Urrutia’s Belardi Auto Racing car snapping at their heels. However, behind them Dalton Kellett spun his Andretti Autosport entry and speared into the second Belardi car of Aaron Telitz, damaging it beyond repair. The incident sent Alfonso Celis off course in avoidance and also held up Ryan Norman, although the latter two and Kellett caught up with the leaders in time for the restart.

That restart would be led by O’Ward who had outbraked Herta for P1 into Turn 5 before the full course caution flew. O’Ward made a perfect restart on Lap 5, so that within five corners he had a one second lead which was a 1.5sec lead by the end of the lap. Herta’s Andretti Steinbrenner Racing car had taken pole by quarter of a second but despite applying late pressure on the leader on raceday, he could do nothing about passing him, finishing 1sec adrift.

Urrutia had a lonely run to third, eventually finishing five seconds behind Herta, but more than two seconds clear of the fraught battle between Franzoni and Norman, resolved in the reigning Pro Mazda champion’s favor.

The second race was run in full wet conditions, and O’Ward made a strong start, with second-placed Franzoni retaining second behind him, but Urrutia passed Colton Herta around the outside, with Telitz fifth. After just one lap the top five were already covered by seven seconds, after two laps, it was out to 10…

O’Ward was in a class of his own, with a 5.4sec lead after three laps, but Franzoni was also dropping Urrutia who was eight seconds further back. The Uruguayan in his third season of Indy Lights was staying just ahead of Herta who had Telitz filling his mirrors. On Lap 7, Herta outbraked Urrutia down the inside of Turn 5 to take third. However, he was already 17sec behind Franzoni who had stabilized his deficit to O’Ward at around 5sec.

Telitz passed his Belardi teammate at Turn 5 two laps later and started trying to chase down Herta who was making zero impression on Franzoni, let alone O’Ward. But Telitz had nothing for Herta. In fact, the only battle on track in the second half of the race was Urrutia trying to hold off the Andretti cars of Kellett and Ryan Norman.

O’Ward, whose fastest lap had been 0.8sec faster than that of his nearest competitor, won by 5.8sec, while Herta was half a minute behind Franzoni, and more than that ahead of Telitz.

On Saturday, Parker Thompson and Exclusive Autosport scored their first win at Pro Mazda level with a comfortable victory from pole position.

The Canadian combo crossed the line five seconds ahead of RP Motorsport’s Harrison Scott, the EuroFormula Opel champion, who in turn was almost 13sec up on David Malukas of BN Racing.

Malukas had to work hard to hold off Team Pelfrey’s Andre Gutierrez throughout the second half of the race, but held on for the final podium position.

Indeed Gutierrez had to watch his mirrors in the closing stages as Juncos Racing’s double St. Petersburg winner Rinus VeeKay was ready to pounce should there be any issues for the pair ahead.

The damp Sunday race saw Parker Thompson lead from pole but dropping all four wheels off the track on the second lap allowed Scott and Gutierrez ahead. Thompson was closing in on them again on Lap 9 as rain started to fall but at the same time Gutierrez slipped past Scott to grab the lead and quickly pulled more than a second ahead.

Poised to benefit from any collisions was Malukas, but on lap 15 Carlos Cunha and VeeKay took their Juncos Racing cars past the Pelfrey car of Rafael Martins and then demoted Malukas five laps later.

Then as the rain got harder and with the drivers still all on slicks, Gutierrez fell off the track and dropped to seventh. A full-course yellow for “poor conditions” allowed Oliver Askew to pit his Cape Motorsports car for rain tires, dropping only from 10th to 12th, but disappointingly the yellow remained out to the checkered flag, so Scott and RP Motorsport clinched their first victory in America, ahead of Thompson, Cunha, VeeKay, Malukas, Robert Megennis, Gutierrez and Martins.