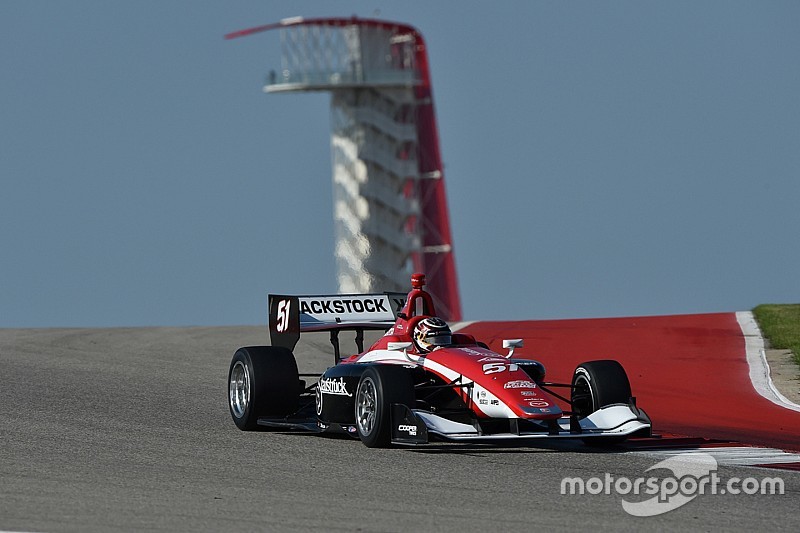 Canadian rookie Zachary Claman DeMelo may not have taken top time of the day in Indy Lights, but he was P1 in the final session and kept the pressure on series sophomore Shelby Blackstock all weekend.

Driving for Juncos Racing, which took Spencer Pigot to the 2015 title, DeMelo commented: “I am really happy with the weekend. The team was really good and I learned a lot from them and hopefully I can keep progressing from this test. I think it went really well and I am happy with myself.”

Nonetheless, it was Andretti Autosport’s Blackstock who took fastest time of the day, with the seven Lights drivers present covered by just 1.6sec. He stated: “These two days have been massively beneficial especially from where we were last year. We are going through a big test plan and the car is definitely responding in the right way. Mike [Reggio, engineer] and I are working really well together and the test plan is coming along nicely.”

Jose Gutierrez was third fastest for Juncos, with the first of the Schmidt Peterson cars in fourth, driven by another rookie, James French.

Said Monterrey, Mexico native O’Ward: “The weekend has been great. The hopes are to do Pro Mazda again. I love working with Team Pelfrey. They have been a second family to me. These have been a very productive two days and we had a lot of time to test a lot of things. I’ll keep pushing for 2016 and hopefully win the championship.”

Third fastest was Jake Parsons, the 2014 AsiaCup champion, driving for Juncos. He commented: ““We spent the two days really dialing in the car. Every session I was getting more comfortable with the car, and the guys and I are working better and better. It’s a good start and hopefully we can keep this going into next year.”

His teammate Will Owen was fourth fastest.

Nikita Lastochkin completed a six-out-of-six sequence for Cape Motorsports with WTR, heading every session throughout the two-day test. However, the driver who recently vacated that ride to drive for Pabst Racing, Aaron Telitz, ran the Russian close in the final session, drawing to within 0.2sec of his fellow sophomore.

Nonetheless, Lastochkin’s fastest time of the day was a comfortable 0.6sec clear of the field, and he was moved to comment: “I was quite happy with the weekend and we had a really good car. I enjoyed every second I was out there on the track. I learned a lot and the team helped me to improve. Overall, I couldn’t be any happier.”

Remarkably, it was Rinus van Kalmthout who emerged third fastest, also driving for Cape Motorsports. Yesterday had been the Dutch teenager’s first taste of USF2000 equipment (driving for Afterburner Autosport). He was only 0.25 off his pace-setting teammate Lastochkin in the slower final session.

Kaiser topples Blackstock, Jamin to the top, Lastochkin holds on