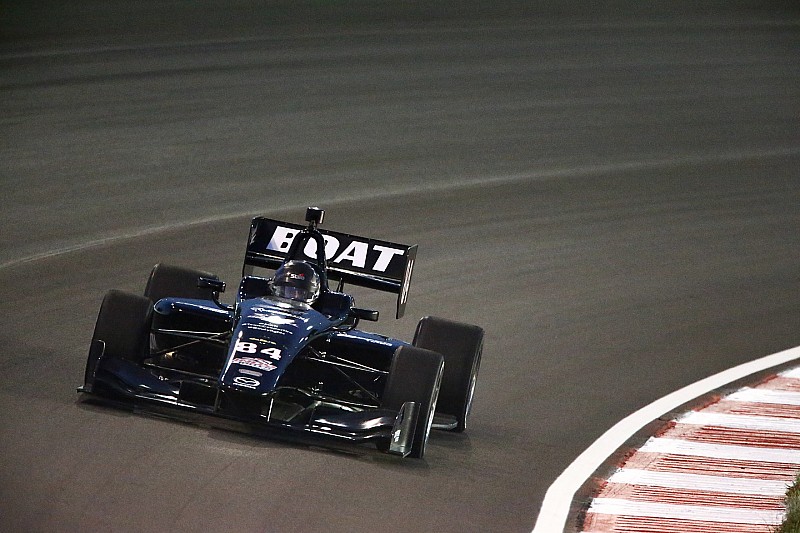 Chad Boat hasn’t abandoned his dreams of racing in NASCAR. But for now, there’s another goal on his bucket list that’s taking precedence – the Indianapolis 500. Lee Spencer reports.

After watching his father Billy win the pole for the Greatest Spectacle in Racing and battle on the bricks seven times, the second-generation open-wheeler has set his sights on following that same path.

Which is why on Saturday, Boat, 25, will make his Indy Lights debut with Belardi Auto Racing at Gateway Motorsports Park.

“It’s exciting, definitely a great opportunity,” Boat told motorsport.com. “I was disappointed I didn’t get to do it at Iowa a couple weeks ago, but excited about Gateway. We brought a pretty good car. We’re concentrating on finishing laps and getting all the experience I can.

“If you asked anyone in the Indy Lights garage, I think racing at the Speedway or driving an Indy car is the ultimate goal. It all kind of starts with getting used to a high-downforce car. I’ve never driven anything with this much downforce.”

Originally, Boat had hoped to run the Freedom 100, the Indy Lights companion event to the Indy 500 at Indianapolis Motor Speedway. When that didn’t materialize, his focus turned to the July 9 event at Iowa Speedway.

However, Boat, who is currently seventh in the USAC National Midget Series standings, was involved in a spectacular wreck at Lincoln Speedway in Illinois on July 2. After contact with a car driven by Brayton Lynch, Boat’s midget flipped over the fence and barrel rolled out towards the parking lot. Although Boat walked away, his physicians felt it was in the driver’s best interest to sit out a couple of weeks and put his Indy Lights plans on hold.

Boat’s first opportunity for seat time came during the open test at Gateway on Aug. 10, and on Friday Boat completed 50 laps in practice around the 1.25-mile oval.

“It definitely drives differently than anything I’ve ever driven before,” he remarked. “It’s the first rear-engined car I’ve driven. It handles a lot different than a sprint car or a midget because it creates so much grip. Just trying to get used to that feeling... how hard you have to run it. You have to be quick. And that’s what I’m trying to figure out.

“We’re not as quick as I’d like to be, but we’re still working on the car and trying to figure out what I like. Obviously, it’s the second to last race of the Lights season, and the other drivers have run all year, so trying to be where we want to be is quite difficult. But we’re just going to keep plugging away. With each lap we’ll get better and better and get closer to where the other guys are.”

With four races remaining on the 2017 midget schedule, Boat is carrying plenty of momentum. He has won three of the last six events, including two of the four in the #84 Tucker-Boat Motorsports car during Pennsylvania Midget Week.

“We’ve run really well and I think we’re going to finish up the season really strong,” Boat said. “Once the season ends, we’ll consider our options. I’m not sure whether the full (Indy Lights) season is something we’re looking at. It might be more of the ovals to concentrate on getting to the Speedway one day.”

While Boat hasn’t shored up his plans for 2018 yet, TBM already has a new car built for the Chili Bowl Nationals, a race the elder Boat won in 1997.

“It’s another place we’ll be ultra-competitive; we’ve run well there in the past,” Boat said.

As for a return to NASCAR, despite the new youth movement, Boat doesn’t believe he’s aged out of stock car racing at 25. Since moving to Charlotte five years ago after completing a full season in the 2011 K&N Pro Series, the Phoenix native has dabbled in the Camping World Truck and Xfinity Series with a career-best finish of ninth in a truck at Talladega Superspeedway in 2015.

“I think you just have to show people you still have the ability to do it,” Boat said. “I don’t think you ever completely age out of it. Obviously, there’s a transition period, and things are changing. You still see a lot of guys getting shots, but they’ve proved themselves, won races and probably earned their spots.