History was made in today’s Indy Lights race as four drivers went for the glory and ended up have the closest-ever finish on the famous Indianapolis Motor Speedway 2.5-mile oval.

Peter Dempsey came from fourth place on the final corner of the final lap to overtake Gabby Chaves, Sage Karam and Carlos Munoz and win a thrilling Firestone Freedom 100. 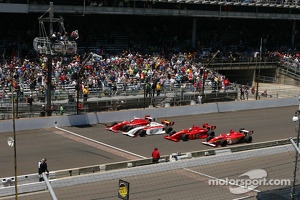 Exiting Turn 4 Munoz, Karam and Chaves were racing side by side to the start-finish of the Indianapolis Motor Speedway. Suddenly, Dempsey found a seam close to the outside wall on the 50-foot-wide frontstretch.

The 27-year-old native of Ashbourne, Ireland, immediately knew he had won the marquee race of the Firestone Indy Lights season, raising his left hand off the steering wheel, though it was a photo finish. The margin of victory was .0026 of a second -- the closest on an oval in the 100-plus-year history of the Speedway.

Gabby Chaves (No. 7 Schmidt Peterson c/w Curb-Agajanian): "A couple of feet more, and this would have been my race. I did everything I could up until then. I don't think I'm going to be able to sleep for a couple of nights before I can let it go. I was just sitting there waiting for my moment."

Chase Austin (No. 28 Starting Grid): "It was fun. I had a good time. Too bad the driver messed up and had a little error and brushed the wall. I was tightening up my car and kind of went the wrong way with it, ended up brushing the wall, and bent some wishbones on it. I had fun, but I wish there was a caution. I'm just proud to be out here. We are going to go to Iowa and try to do better than eighth next time. Hopefully, I'll be here next year. I am really excited. I love these cars."

Juan Pablo Garcia (No. 2 TMR-International-Euclid Chemical): "I couldn't keep up; I don't know why. I was trying to get on pace at the beginning, but it was really hard. I wanted to work hard and get up to my teammate at the end. I didn't have enough power. We will have to work on it. This is the way it is."

Zach Veach (No. 12 K12/Andretti Autosport): "I had a beautiful view of the finish; I just wish I was a little closer to it. The first 20 laps, the car was really good. I had enough tools in the car to adjust it and take it where I needed. The last 20 laps, I was out of adjustment on everything I had on the car. From that point on, I was just hanging onto a loose race car at Indy. I stayed in the draft through the last 15 laps, but with five to go, I started falling back. I couldn't do anything to bring the car back to life. At that point, it was either push harder and crash the car or take home what we had. It was a good run for us. We'll get them back on the short ovals."

Jorge Goncalvez (No. 4 Belardi Auto Racing): "I was at the back of the field when Chase Austin touched the wall. I slowed down because I thought he was going to crash, and I lost the gap with the car in front of me. I had a pretty good drag, and when you're not fast enough without the draft, you cannot catch the car in front of you. Before that, the car was pretty good.

Jimmy Simpson (No. 22 TMR-Reed Smith-Xtreme Drilling & Coil): "It was a strange day. Always at the Indy Lights race here, there are a lot of cautions. That's what we were expecting, and we set the car up to take advantage of that. When it didn't happen that way, we just weren't fast enough to keep up with most of them."

Jack Hawksworth (No. 77 Schmidt Peterson c/w Curb-Agajanian): "The car felt good. I was able to run high and able to run low and stuff. I was struggling to make some passes. I couldn't quite get close enough at the end of the straights sometimes to pull myself on the outside, but I thought the race was going OK. I just caught a bit dose of dirty air going close behind (Zach) Veach. It took all the air out of my front wing. I just had no grip on the front, and I just understeered into the wall." (On the race conditions): "It was OK. The car was fine; the car felt good. It was an ideal day to go racing, but obviously not the result we wanted."

Brian Belardi (Owner, Belardi Auto Racing): "It literally took my breath away. He did such a great job just holding station. We knew it was going to be a shootout with those three cars in the front, and they just poked a massive hole, and he (Dempsey) was able to sneak in there and just drove a flawless race. He is a great race car driver; we all know. For the team to get their first here, it is so special. Words cannot describe it."

Peter Dempsey (No. 5 Belardi Auto Racing): "I said it before the race, it's 40 laps, and you go around in circles, but there's no better place to do that than in Indianapolis Motor Speedway. (Spotter and Firestone Indy Lights veteran) Stefan Wilson, hats off to him. He's a British guy, hard to hear sometimes, but I'm glad he spoke to me as much as he did that time. He won the race for me. He said, 'Be patient, get us across the line, they're going to spread out, and you'll sneak up on them.' He's never won here with himself, but I definitely owe him this one. Beers will be on me tonight. It was a fantastic finish. Firestone Indy Lights needs finishes like that. Huge thanks to Firestone. My car was tough to drive the whole race, and the tires held in there really great. So huge thanks to them. I was expecting the rears to go off more, but they hung in there with me. Firestones got me across the line." (About his journey to this point): "I mean, if you're going to win your first Firestone Indy Lights race, there's no better place to do it than at Indianapolis Motor Speedway. I had a feeling this end was going to happen. And you know it's going to be four-wide across the line certain enough. It's massive. Belardi Auto Racing gave me this opportunity, and it's Brian's (Belardi) first win, so it's much his dream as mine to win at Indianapolis Motor Speedway. And I beat the guy that qualified second in the Indianapolis 500, so that's not a bad thing, is it?"

Simon Pagenaud is fastest on the Carbuetion Day