MODERATOR: Esteban Guerrieri wins the Freedom 100 in a dramatic from the back victory. Esteban was also winner at Long Beach. You're on a pretty good roll, Esteban. Take your time with the water and then tell us all about it. 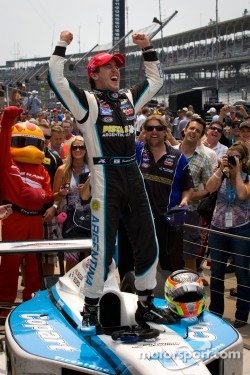 ESTEBAN GUERRIERI: Thank you. Sorry, I was a bit thirsty. It was quite long out there, the sun was also quite hot. So well, what do you want to hear about the race? The start, it was a fantastic race. That's why I'm trying to remember it all, you know. I had a very good start. Obviously the first start was not good, so we did one more lap. We got some more speed into the start. So I got a run on the outside. I think I overtook like four cars already into Turn 1, and I just tried to be smart, you know, not to get too greedy, even if I make up positions really quickly. I just tried to use my head, as my engineer was telling me. So I definitely went step by step. Then I was in P7 and there was a red flag, so everybody cooled down the tires and everything. Then on the restart I already was feeling the car a bit loose. So, you know, last year it was different to this year because last year was a little cooler, and we didn't make so many laps in a row on high speed. So I didn't know what was this going to, you know, this was going to come in 10 laps from there. So I just tried to stay where I was. I was in P5, I think, I stayed where I was, took it easy, tried not to kill the tires as my engineer told me, the last five laps are the ones that are important. So I just went from there on, and the last five laps was when I attack. The car was better. I think the front tires were out a bit more. Everybody was struggling I guess as much as I was, but I was comfortable overtaking around on the outside. It was a great day. I was very aggressive on the last two or three laps. We got the win from the back; it doesn't happen every day. I think the last time it happened for me was in go-kart. I repeat it this time and it's Indianapolis, the Speedway, which is the history of motorsports. So I can't tell you how happy I am because the team as well, the Sam Schmidt guys, which they are my friends after a year and a half working with them. They are basically my friends and my family. I'm so pleased that we could achieve this. You know, I think we are on a good way for a championship but we really wanted to get this one, and I was confident from the back I could do it. So I'm really, really pleased.

Q: Honestly, you changed an engine, that's why you started at the back. What was the process of changing it? Was it something you had to do or something you thought we should do so you had a chance to win?

GUERRIERI: No, the only time we had like to really analyze how we were on the speed, it was qualifying. Otherwise you are in drafts in practice, you are in the draft. You never have a real comparison. So we realized we were not good, but we then on the last day, tell the engineers, last day we could see there was probably not, we couldn't pull the speed around the corner, even if I was driving really clean. The engineers, they have plenty of experience here and we couldn't pull the speed very good, so we decided it was worth the penalize, to get a penalty, sorry, and to start last. But to get a fresh one, even if we, we knew we were going to be quick with one engine or with the other one because when you're in the draft it gets quite equal. But we definitely wanted something that probably was a bit better. I guess it was because I could really get around some of the guys, and in the end when I kept my first position with nobody in front of me, I had a good run. It's not only the engine, it's also the good car we had, the balance we put in the car, how we strategize the race, not killing the tires too early, and yeah, all this package came together and that's why we win. It's not only because of the engine, of course.

Q: Esteban, one question. With your success in Indy Lights, sooner or later you will step up into IndyCar. Do you think one day we will see an Indy race in your country in Argentina?

GUERRIERI: Yeah, it's an ex-team owner, and he's helping me out here a lot. Together with Sam, we put this deal together and with my sponsors, Pistas Argentinas, and plus the others, plus from Sam put this deal together. But obviously we want to work for further future here in the U.S. and grow up. But now we are focused on trying to win the championship. We won the 100, which is good, and then obviously it's going to be a lot of work to try to get a deal in the IndyCar for next year. But I'm sure with the help of everybody, and I say again, John Della Penna, he's a guy helping me a lot. I get the contacts; I'm getting used to know these people here in the IndyCar paddock. Hopefully they know me a bit more with this victory. So it's good to get the relationship, you know, getting stronger and hopefully one day it will be in IndyCar. Hopefully not too long, next year, I guess.

Q: Take us step by step through that three wide into into Turn 1 that wound up being the pass before the pass you did to take the lead.

GUERRIERI: That was the pass before the lead, yeah, Turn 1. To be honest, I did it so many overtaking that it's hard to remember all of them. But I remember that one. In the middle was Tristan, right, then Munoz on the inside. Yeah, I had a very good run, Turn 3 I just smooth off the throttle a little bit, went flat in Turn 4 to get the run on them. I pulled sixth gear, and I said it was three laps to go, so I thought it's now or never. When I went off the draft from Tristan, my car kept pulling, and I just kept it flat. I gave him room, but for the one in the middle it's really hard to keep it together, you know, because you normally get two cars coming quicker, and you know what they're going to do. It's like instinct that you normally back off a little bit. So I was on the outside. I gave him plenty of space, but then in the exit of the corner I was side by side with Munoz, and I kept flat around the exit. I was having better momentum than him, I guess, coming from the outside using the banking. When I went off into the back straight I was, I think, just in front of him. I could pull little by little, I think I went down to fifth gear in the short chute, which helped me and down the back straight that helped me, and I could make my final move.

GUERRIERI: I want to dedicate this race, if everybody can write, to Chris Griffis, which was our team manager and, you know, he passed away last year. He loved to win this one. So please if you could write that in the newspapers, that would be good.