Guerrieri and Saavedra dominate for 1-2 at Long Beach

Next time, you win, Esteban!

If this season’s podiums for the Firestone Indy Lights Series seem to be similar each, time, it’s because they are. In fact, at their last race at Barber Motorsports Park, the winner in Birmingham, Sebastian Saavedra reportedly whispered at that time to Esteban Guerrieri: “next time, you win, Esteban”. And, he did, or so the story goes. Indeed, Guerrieri ended up taking today’s victory on the Long Beach street circuit here in sunny California.

Pole sitter Saavedra quickly relinquished his lead on the first lap to the Argentinean, and Guerrieri maintained the lead throughout all 45 laps. As they said in their press conference, they both called it a “clean race” and the personable Saavedra emerged from the race on top of the tight points race for the championship; now having taken a 3rd, 1st, and 2nd place in three consecutive races. 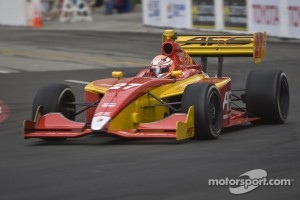 Guerrieri pointed out that his race deal came together very late in the day and feels most fortunate in winning at Long Beach, and now being 3rd in the points. He said, “It is a real pleasure to race with these guys”, referring to his closest competitors, Saavedra, Tristan Vautier, and Gustavo Yacaman. He also expressed his feelings that three of the four top drivers hail from South America… “A lot of pride for Latin America”.

French driver Vautier, who won the season opener on the streets of St. Pete, had quite a ride on the wheel of fortune this weekend. He lost the pole at the last minute to Saavedra yesterday, and then he had to fight back by moving from seventh to fourth place during the race. The Frenchman suddenly gained the last spot on the podium when Yacaman was assessed a penalty after the race because he had no mirror.

The 2011 Star Mazda champion Vautier leaves Long Beach second in the points. The Indy Lights drivers will next take on the famous Brickyard. The Firestone Freedom 100 in Indianapolis will be contested on May 25th.