INDIANAPOLIS (Dec. 21, 2011) – Josef Newgarden, who drove the No. 11 Copart/Score Big/Robo-Pong Dallara for Sam Schmidt Motorsports (SSM) to this year’s Firestone Indy Lights championship, is the recipient of the 2011 “Securing Tomorrow” Award for being the series’ winningest driver in 2011.

It was a fantastic team effort where everyone put something into each race.

The resident of Hendersonville, Tenn., who turns 21 on Thursday, scored five victories this season to secure the award, presented for the sixth year by Gregory & Appel Insurance.

Newgarden won the season-opening race on the Streets of St. Petersburg, Fla., followed by a victorious run in the Firestone Freedom 100 at Indianapolis Motor Speedway on Carb Day, and he added wins at Iowa Speedway in Newton, the streets of Edmonton, Alberta, and New Hampshire Motor Speedway in Loudon. Newgarden’s SSM teammates – Esteban Guerrieri (3), Conor Daly (1) and Victor Carbone (1) – also scored victories in 2011, giving the team 10 wins in the season’s 14 Indy Lights events and a series-leading 46 since 2001.

“We had a wonderful year at Sam Schmidt Motorsports,” said Newgarden, who is the fifth SSM driver to capture the Indy Lights championship. “It was a fantastic team effort where everyone put something into each race. For me to come out with the most wins at the end of the year was a great bonus and an experience that I’m grateful for having. I want to thank Gregory & Appel for their continued effort to support young drivers. It’s an honor to receive this award.” 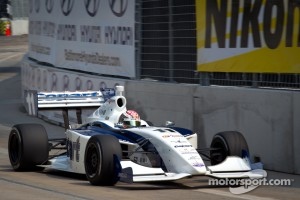 “Josef came to us last season with excellent credentials and he certainly lived up to it all through the season,” team owner Sam Schmidt said. “He proved to be a model of consistency from the first race to the last. Not only did he win five races, he finished second three other times and was third at another race, which is precisely the recipe for winning championships. It’s a thrill to see his efforts and excellent performance in 2011 pay off with a full-time IndyCar ride. He earned it.”

The 2012 Firestone Indy Lights season kicks off March 25 with the Honda Grand Prix of St. Petersburg. Frenchman Tristan Vautier and Englishman Oliver Webb have already been named to the 2012 SSM Indy Lights lineup. Additional drivers will be announced at a later date.