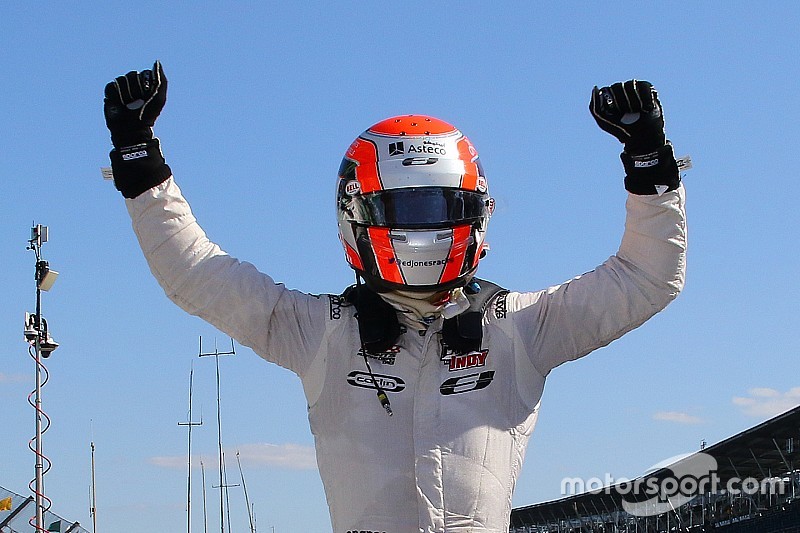 Carlin Racing’s Ed Jones became the Indy Lights series’ first repeat winner this season, as he first lost, then won to opportunism on the penultimate lap.

Jones, who had led from pole, albeit under pressure from fast-starting Dean Stoneman (Andretti Autosport) and Santiago Urrutia (Schmidt Peterson Motorsports), lost the lead for half a lap following a late-race restart.

Stoneman dived down his inside at Turn 1, forcing Jones to hold out wide and allow Urrutia through into second. However, at the end of the back straight, Urrutia’s late outbraking attempt on Stoneman compromised the pair of them, sent them wide, and Jones earned his reprieve and held on to clinch victory by less than a second over Urrutia.

Stoneman took his second straight podium finish with third, ahead of Felix Rosenqvist of Belardi Autosport.

These four had appeared to be in a class of their own through the race, until Felix Serralles in a second Carlin car started carving into their advantage, sometimes by as much as half a second per lap.

Having qualified fourth, the Puerto Rico-born racer had been compromised at the start when Schmidt Peterson’s RC Enerson had attempted to squeeze around the outside of the front-row starters (Jones and Rosenqvist) and caused enough compression to force the field to brake hard and early, shuffling Serralles down the order.

But Serralles then charged back into contention and even without the caution, might have deprived Rosenqvist of fourth. However, on the last lap, three corners from home, he attempted an outside pass, and when he realized it wasn’t going to work, had to take to an escape road, dropping from fifth to seventh.

That wasn’t enough for former championship leader Kaiser to prevent Jones now pulling to a 23-point lead in the championship, with Urrutia in third, just three points behind.

The only caution flag came when Team Pelfrey’s Scott Hargrove was so busy defending from Schmidt Peterson’s Andre Negrao that he braked too late on an inside line and struck the rear of another SPM car, that of Scott Anderson. The collision brought both cars to a halt on lap 22, Hargrove’s permanently.

That completed a bad day for Pelfrey’s Lights team, which saw Juan Piedrahita collide with Andretti’s Dalton Kellett on the second lap.