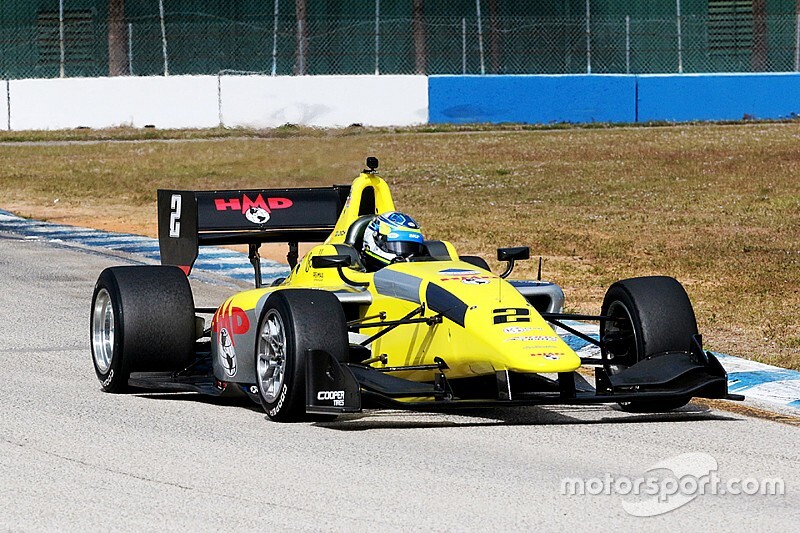 “HMD is a new team [to me] in Indy Lights, so we wanted to see how they worked,” said Lindh, who also tested an Indy Lights car with Andretti Autosport at Indianapolis in October. “The first day was all about getting used to how they did things, like the setup of the car and how we would work with the engineer. We put it all together this morning and were fastest straight away, and quickest at the end of the day.

“We have a very good feeling now. This is only my fourth day in the Indy Lights car so I feel I can improve – but everyone in the field feels that way, since we’re all rookies and most of the drivers are coming up from Indy Pro 2000.

“I feel as though I’m ready to move up to Indy Lights next year, though I need a little bit more time to get used to everything. The Road to Indy ladder is very good, the steps really prepare you as you move up.”

Kirkwood, said of the Indy Lights Dallara: “It’s a much different car than the Tatuus [as used in USF2000 and IP2000], especially with the turbo, the much longer wheelbase and what feels like a very different tire compound. It seems as though you can drive the Dallara harder and find lap time that way. It’s more of a driver’s car.

“And this was my first time driving a real open-wheel car around Sebring. I live only 90 minutes away from here, but I haven’t driven here that much. It took me a session or two to get acclimated but now it comes naturally. Andretti clearly has a good baseline setup and we didn’t deviate much from that. We tried a few things so that I could get a feel for what changes did to the car. We were quickest all day even though the time wasn’t there in the last session, but we ran only one set of tires while HMD ran three.

“It was more about seat time for me, since this was my first time driving the car.”

A total of nine drivers completed 1356 incident-free laps, with the top eight all within one second of Lindh’s benchmark time.

In addition to Exclusive Autosport, Jay Howard Driver Development also turned its first “official” laps during a sanctioned Indy Lights test with Christian Bogle in preparation for an anticipated series debut in 2021.