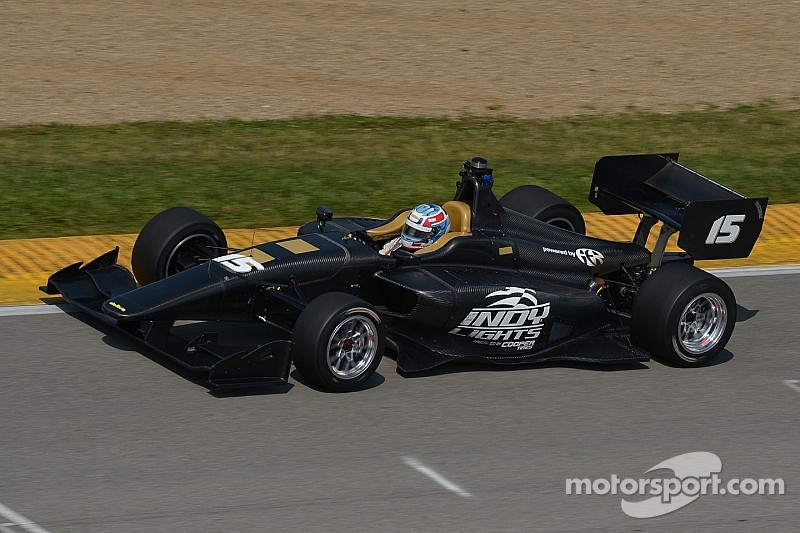 The 2015 Indy Lights Presented by Cooper Tires Championship grid will feature a new car, new teams and interest from several IndyCar teams in fielding cars for 2015.

But where are we right now?

Right now, Belardi Auto Racing has committed to two cars next year with the new IL-15 with a possibility of more cars.  A press release put out by the team confirmed that deposits had been paid for two cars.

There hasn’t been much news from many other Indy Lights teams.  Fan Force United is stepping up into the Verizon IndyCar Series next year with Stefan Wilson, but so far hasn’t announced any Indy Lights plans.

Team Moore Racing likewise hasn’t said anything about their 2015 plans, nor has Bryan Herta Autosport.  Schmidt Peterson Motorsports will have Ethan Ringel driving for them next year per Ringel’s Twitter, but it is unclear if they will have multiple cars next year.

The last remaining team in Indy Lights is Andretti Autosport, and their 2015 plans are up in the air, especially given Michael Andretti’s recent comments.

"The only way I could do (Indy Lights) is if I find a kid that can afford to pay for the car.  I won't be able to afford going out and buying a new chassis. I'm not saying (the program) is dead — it's still possible — but at this time we don't have anything yet,” Andretti said.

This could lead to an interesting situation given that Zach Veach is right behind Gabby Chaves for the points lead and Matthew Brabham might do another year of Indy Lights.  But having Andretti Autosport not show up on the grid would be detrimental to the series, especially given their support of the entire Mazda Road To Indy.

There are rumors of new teams joining Indy Lights next year.  Davey Hamilton Jr. posted on his twitter account photos of him having a seat fitting in Sage Karam’s DW12.  Since the seats between the DW12 and the IL-15 would be interchangeable, would Kingdom Racing field a car for the team owner’s son?

There’s also a rumor of Hylton Racing joining the series after team owner Keith Hylton posted a tweet saying “Testing the waters…. Indy Lights” with a picture of an IL-15 with an HGP logo on the sidepods.  The team materializing is anybody’s guess.